OUT OF MIND » BREAKING NEWS & HOT TOPICS » THE GREAT DIE OFF » Coronavirus End Game: The Economic Crisis and Roll-Out of the New Digital Financial System 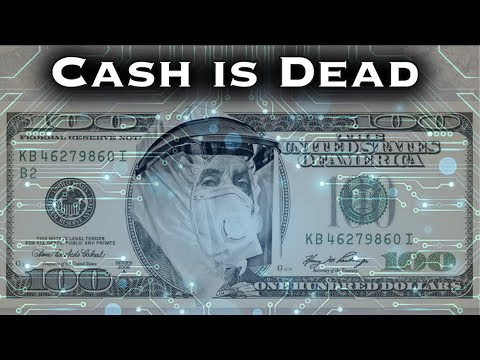 I’m really happy to see Spiro Skouras breaking out on his own. Some of you may recognize him as a reporter on Sibel Edmonds’ Newsbud channel.
Spiro gives his highly-informed assessment that the coronavirus outbreak is being used as a pretense to conceal the crimes of the international banksters. The plan is to remove cash from circulation so the central banks can roll out their digital currencies. This won’t happen overnight but within the next few years.
The intention is to create a cashless society, which as he says, will be “the cherry on top of the Surveillance State, where everybody will be tracked, controlled, monitored, taxed and regulated into submission.”
He explains, “The United Nations and the central banks have the same controllers above them and are working together on many fronts, to establish a form of global governance, which has been laid out in documents – their own documents – specifically, the 2030 Agenda, which was previously Agenda 21 and everything that’s happening, right now, everything that we’re seeing, I believe is undoubtedly connected.”
In a previous interview Spiros did with Francis Boyle, author of the US Biowarfare Act, the latter confirmed the coronavirus is a bioweapon. Spiros also covered in detail ‘Event 201’, which was a drill for a coronavirus pandemic conducted by UN just before the actual coronavirus outbreak occurred in Wuhan.
He says, “Coincidentally or not, on the same day that the World Military Games were holding their opening ceremonies in Wuhan – which, of course would have provided the perfect cover for a foreign nation to release a weaponized biological agent there, in Wuhan, which is now Ground Zero.”
The current debt-based central bank financial monetary system has been used as a means to control and enslave entire nations and, as he says, the dominance of the US dollar “was never meant to last forever. In fact, I personally believe it was first meant to last just long enough till technology caught up with the ideology of technocracy.”
The new digital currency paradigm getting ready to be rolled-out is basically a new system of control and it’s going to take a traumatic event to shock people into accepting it.
“9/11 is a perfect example of how people would have never accepted the roll-out of the police state or the surveillance state, in addition to the endless wars abroad, if it were not justified by major crisis; the ‘terror attacks’ on September 11th.
“Now, the current economic and financial system is on life support. The Federal Reserve is pumping trillions into the system to keep it from crashing, until the new system of control is ready to go – and it’s just about ready.
“The major central banks have been working for years to develop their own digital currencies. They’re called CBDCs or Central Bank Digital Currencies. They’re all onboard, they’re all doing it. I’ve been researching this on a daily basis for  a while now and you can see it coming. You can see the partnerships taking place…
“Now, it’s starting to go mainstream and it’s just about ready to roll out. It was only a matter of when and how and the coronavirus looks like the perfect storm to roll out this new system.
“Now, if the US economy crashes, the global economy crashes, but it’ll be a controlled demolition, just like the Twin Towers on 9/11 and in my opinion, when you see domestic air travel in the US restricted, that will basically be a major domino to fall, which signals the crash is only days or weeks away. I hope it doesn’t come to that but this is what it’s looking like.
“We have already seen a huge loss in the stock markets, they say it’s already the largest and fastest drop in the stock market since the 2008 financial crisis and we’ve already seen the New York Stock Exchange signaling shutting down floor trading; they’re worried about ‘contamination’ and they’re encouraging traders to work from home – and on top of that – this is really important – the New York Stock Exchange is planning to run a disaster recovery drill on the morning of March 7th, so mark your calendars for that – it’s about a week away…
“Now, the Financial Stability Board, they operate under the Bank for International Settlements, is currently preparing final drafts for the new financial system and they’re going to be presented to the G20 [on November 21-22, 2020]. And it’s going to be the global framework for this new financial system.
“Now, the UN has also had plans in the works and they’ve been funding their own cryptocurrency projects. Mark Carney, who is the head of the Bank of England will soon take on a new role at the United Nations, as the Special Envoy on Climate Action and Finance.”
It’s being sold as a new “sustainable financial system” to “stop runaway climate change”, with a stated goal of reaching a “net zero carbon economy” globally in the not-too-distant future. Carney has clearly stated that a new financial system is already under construction.
Spiro says, “He’ll also be a major player in the new system of control of the new financial system and its roll-out, as well as the former head of the International Monetary Fund and current head of the European Central Bank, Christine Lagarde.
“Now, Ladies and Gentlemen, this is not about money, this is about control. These private central banks print money out of thin air. They literally have all of the money in the world that they could ever need or want. They want to centralize power, they want to control the population and ultimately, reduce it. It’s been documented over and over. I know, that sounds extreme but it’s real…”

OUT OF MIND » BREAKING NEWS & HOT TOPICS » THE GREAT DIE OFF » Coronavirus End Game: The Economic Crisis and Roll-Out of the New Digital Financial System

» ‘Game-Changer’, Get Ready For The Gold-Backed Digital Yuan
» World Economic Forum Debuts Framework for Central Bank Digital Currency
» 21 Signs That The Global Economic Crisis Is About To Go To A Whole New Level
» IMF REACTS TO GLOBAL ECONOMIC CRISIS FOLLOWING BREXIT
» Bill Gates Is Quite Confident That He Can Leverage The Coronavirus To Make Every Person On Earth Receive A Vaccination With Digital ID