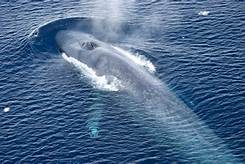 The Antarctic blue whale is the largest animal on Earth, weighing up to 200 tons.
We're seeing a lot more of the largest animal on the planet.
A team of scientists led by the British Antarctic Survey (BAS) counted 55 Antarctic blue whales during their 2020 expedition to the sub-Antarctic island of South Georgia — a number they called "unprecedented."
In addition to Antarctic blue whales, the team recorded 790 humpback whales during the 21-day survey, and estimated that there are now more than 20,000 of them feeding off the island seasonally.
The blue whale population in South Georgia was nearly decimated by commercial whaling that started in 1904, according to WWF-UK. Although protections were put in place through the International Whaling Commission in the 1960s, commercial hunting wasn't officially banned until 1986.
Finally, after more than three decades of protections, the whale population appears to be rebounding.
"After three years of surveys, we are thrilled to see so many whales visiting South Georgia to feed again," Dr. Jennifer Jackson, a whale ecologist at BAS, said in a statement. "This is a place where both whaling and sealing were carried out extensively. It is clear that protection from whaling has worked, with humpback whales now seen at densities similar to those a century earlier, when whaling first began at South Georgia."
In 2018, blue whales were only sighted once and detected acoustically during the BAS team's survey of South Georgia. Only two years later, they were sighted three dozen times for a total of 55 animals.
In some instances during the latest survey, the researchers were able to get skin and blowhole "breath" samples to learn more about the health of the whales they observed, reports the BBC.
"For such a rare species, this is an unprecedented number of sightings and suggests that South Georgia waters remain an important summer feeding ground for this rare and poorly known species," BAS said in its release.
The Antarctic blue whale's history 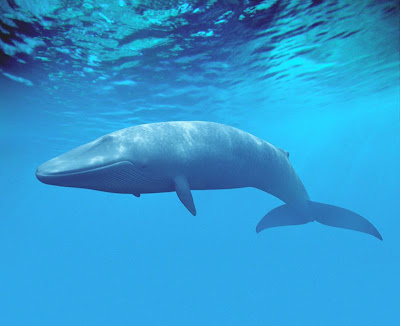 Blue whales were abundant in Antarctic waters until whalers set up shop there in 1926 and later.
In 1926, there were believed to be as many as 125,000 adult Antarctic blue whales. When Antarctic explorer and Norwegian whaler Carl Larsen first visited South Georgia, he was impressed by the whale population and immediately applied for a license to open a whaling station there, according to BAS. He reportedly said, "I see them in hundreds and thousands."
Not long after, many more whaling stations began to open along the coast. Whaling took an incredible toll, and the number of Antarctic blue whales dropped to as few as 1,000 in the '60s. For decades afterward, whales were rarely spotted along the South Georgia coast.
As the effect of protections began to kick in, population numbers increased to 3,000 by 2018, according to the International Union for Conservation of Nature (IUCN), which classifies the Antarctic blue whale as "critically endangered."
With whaling outlawed, today the main threats to blue whales are vessel strikes and entanglements in fishing gear, reports the National Oceanic and Atmospheric Administration (NOAA) Fisheries.
A massive presence

Blue whales can be as long as 100 feet (30 meters) and weigh up to 200 tons. According to National Geographic, a blue whale's tongue can weigh as much as an elephant and its heart as much as a car. The massive carnivore can live 80 to 90 years on average.
To keep their huge bodies thriving, whales survive on tiny shrimp-like creatures called krill. During prime feeding season, a large adult blue whale can eat as much as 6 tons of krill in one day, according to NOAA.
Not only are they big; they're also very loud. They are the loudest animals on Earth with calls reaching 188 decibels, reports WWF-UK. By comparison, a jet is as loud as 140 decibels. The whale also has a low-frequency whistle that can be heard for hundreds of miles. Researchers believe that is likely used to attract other whales.
There are five subspecies of blue whales including the Antarctic blue whale (Balaenoptera musculus ssp. intermedia). Blue whales are found in all oceans except the Arctic Ocean.
'A good place for them once again'
Some observers might wonder whether the sightings of these massive mammals in South Georgia might be a fluke. Perhaps it's just a particularly bountiful year for food in the area that is driving the whales to the area or maybe there isn't a lot of prey elsewhere.
But Jackson from BAS tells the BBC she believes the rising blue whale numbers are a long-term trend.
"The preliminary data does not suggest it has been a particularly unusual krill year. Not this year, nor last year. It seems quite normal," she said. "So, I think this is positive. We know that 100 years ago, South Georgia was a good place for blue whales and now, after decades of protection, it seems the territory's waters are a good place for them once again."