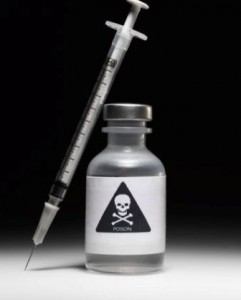 The only safe vaccine is a vaccine that is never used. – Dr. James A. Shannon. National Institutes of Health

Are you scared when you’re told you have to vaccinate your child with
49 doses in 14 vaccines before age 6? Or are you scared at the idea of
not vaccinating and so “exposing” your child to serious illnesses? Are
you scared about the school threatening you that if you don’t vaccinate
you can’t enroll your child?

FEAR. That’s what all these pro-vaccine campaigns are based on. As a
parent, what’s the biggest scare of all? When your child gets sick with a
serious disease and you feel responsible for that. As you see, vaccine
supporters couldn’t go wrong with this and developed a dogma that’s been
bought over and over again over the years by people. The magic
insurance policy to solve it all.

So, even if your child gets sick, at least you know you did
everything you could for his/her health and vaccinated, right? But what
if the very vaccination is able to cause the illness in the first
place??

Could The Vaccine Hoax Be Over?

An extraordinary paper published by a courageous doctor and
investigative medical researcher has dug the dirt on 30 years of secret
official transcripts of meetings of UK government vaccine committees and
the supposedly independent medical “experts” sitting on them with their
drug industry connections.

The 45 page paper with detailed evidence can be downloaded here: The vaccination policy and the Code of Practice of the Joint Committee on Vaccination and Immunisation (JCVI): are they at odds?

Here I present the documentation which appears to show that the Joint
Committee on Vaccination and Immunisation (JCVI) made continuous
efforts to withhold critical data on severe adverse reactions and
contraindications to vaccinations to both parents and health
practitioners in order to reach overall vaccination rates which they
deemed were necessary for “herd immunity”, a concept which with regards
to vaccination, and contrary to prevalent beliefs, does not rest on
solid scientific evidence as will be explained. As a result of such
vaccination policy promoted by the JCVI and the UK Department of Health
(DH),many children have been vaccinated without their parents being
disclosed the critical information about demonstrated risks of serious
adverse reactions, one that the JCVI appeared to have been fully aware
of. It would also appear that, by withholding this information, the
JCVI/DH neglected the right of individuals to make an informed consent
concerning vaccination. By doing so, the JCVI/DH may have violated not
only International Guidelines for Medical Ethics (i.e., Helsinki Declaration and the International Code of Medical Ethics) [2] but also, their own Code of Practice.

The transcripts of the JCVI meetings also show that some of the
Committee members had extensive ties to pharmaceutical companies and
that the JCVI frequently co-operated with vaccine manufacturers on
strategies aimed at boosting vaccine uptake. Some of the meetings at
which such controversial items were discussed were not intended to be
publicly available, as the transcripts were only released later, through
the Freedom of Information Act (FOI). These particular meetings are
denoted in the transcripts as “commercial in confidence”, and reveal a
clear and disturbing lack of transparency, as some of the information
was removed from the text (i.e., the names of the participants) prior to
transcript release under the FOI section at the JCVI website (for
example, JCVI CSM/DH (Committee on the Safety of Medicines/Department of
Health) Joint Committee on Adverse Reactions Minutes 1986-1992).

Information AGAINST vaccination is incredibly vast, believe it or
not. Updated, most reliable sources and scientific data, as well as more
and more medical doctors bring strong evidence about how harmful and
unnecessary vaccination is.

A short summary of the most important arguments that support NON-VACCINATION: 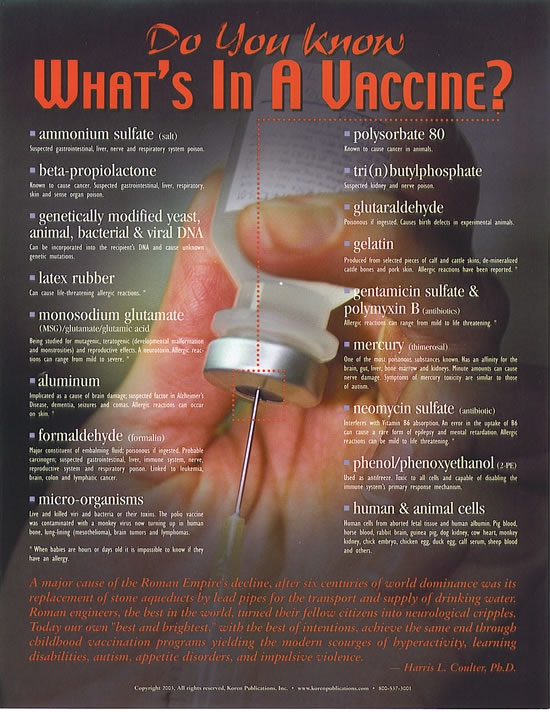 A Few Questions To Ask Your Doctor

Don’t let yourself intimidated by medical doctors, they are NOT Gods
and they surely are misinformed, many of them are corrupted or don’t
want to acknowledge the dangers of vaccines. Most schools will offer you
a waiver if you ask for one. There is NO law that can deny you that.
Exemptions are typically for people who have compromised immune systems,
allergies to the components used in vaccinations, or strongly held
objections. All states but West Virginia and Mississippi allow religious
exemptions, and twenty states allow parents to cite personal or
philosophical objections. Get yourself educated on the matter, it’s
about the life of your child!

1. What are the serious negative health effects that these vaccines can generate? Are the risks worth the benefits?

2. Dr. Michel Odent has linked asthma to the whooping cough vaccine. Have you read his research? What do you think?

3. Professor Wakefield (UK) has linked autism and Chrones disease to
the measles, mumps and rubella (MMR) vaccine. What do you think? What
evidence do you have to back up your opinions?

4. Why is the same dose of vaccines given to a two month old as for a 5 year old?

5. Are you aware that Japan changed the start time for vaccinating
from 3 months to two years and straight away their SIDS rate plummeted?

6. Do you believe in herd immunity? If so, how is it that 98% of
U.S.A. children are vaccinated yet they still have outbreaks of these
diseases?

7. Most diseases were already 90% gone before any vaccines were
introduced. If this is so, how can vaccines be applauded for diseases
ceasing, especially when there were no vaccines for some diseases like
bubonic plague and scarlet fever?

8. How can the Tetanus vaccine induce immunity, when contracting the disease naturally does not give immunity?

9. If the so-called diphtheria vaccine, which is in fact a toxoid,
works against the toxin produced by the bacteria, and not against the
bacteria itself, then how did this “vaccine” help in the decline in
diphtheria?

State of health of unvaccinated children

Raluca Schachter
is a passionate Nutritionist and Metabolic Typing Advisor®, with a
background in both nutrition and communication/PR. She believes in
traditional, unaltered food, ancestral wisdom, sustainable farming and
living. Raluca was able to naturally reverse chronic health conditions
she was struggling with most of her life, and now uses her knowledge to
help as many people as possible do the same. Her health programs and
diet plans offer a very unique and comprehensive approach to health,
where individual nutritional and biochemical requirements are firstly
met using specific nutrients and foods that each metabolism thrives on.
This approach reveals why and how ‘one diet/herb doesn’t fit all’ and
why ‘one man’s food is another one’s poison.’ Raluca currently resides
in Garden Grove, CA and offers her services for local and distance
clientele. For more information visit her website and blog guide2health.net or join Raluca on Facebook