This week, Mila Zinkova looked out over the ocean and saw a familiar sight: The statue of Christ the Redeemer in Rio de Janeiro, Brazil. Which is strange. Because she was standing almost 7000 miles away in San Francisco, California. 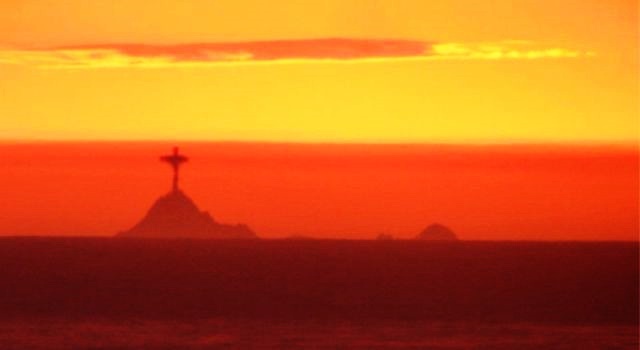 Credit image: Mila Zinkova.
"This is actually the Farallon Islands lighthouse west of San Francisco, it was shape-shifted by the Fata Morgana, it was a mirage, says Zinkova."

In this case, the mirage turned a California lighthouse into a Brazilian statue. "That's not all," says Zinkova. "Evidently Fata Morgana was not satisfied with this design because she kept changing it all the time, reports Spaceweather.

Then, a second sun exploded in the same atmospheric duct. At one point it was rectangular.

» State of Emergency in Brazil After ABNORMAL Rain Turns Streets Into Torrential Rivers
» The Mysterious Lighthouse of Eilean Mór
» Christ Consciousness Wisdoms To Share On Christ-Mas
» Signs and wonders! Red October: Afternoon turns dark and the Sun turns blood red over the UK
» Swallowed by the Sea: Gone Are 5 Islands of the Solomon Islands