The solitary surrealism of Gertrude Abercrombie 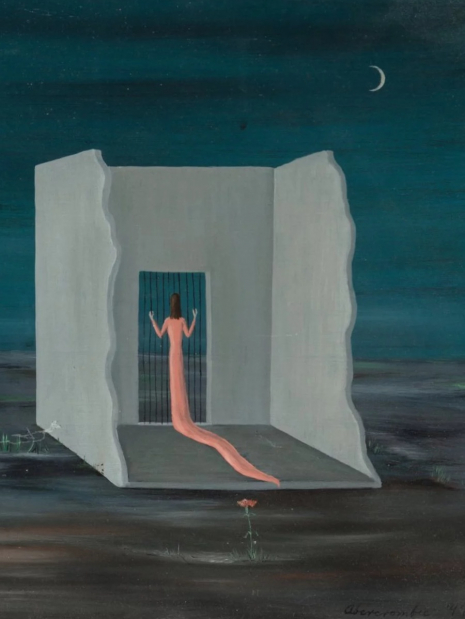 A now all-too-relatable painting by Gertrude Abercrombie, “Woman in a crumbling cell,” 1949.

By the time she was five, Gertrude Abercrombie had already lived in Austin, Texas (her birthplace), Berlin, Germany, and then Aledo, Illinois. Two short years later, the family of three would finally settle down in Chicago, a place Gertrude would spend the majority of her life.
Though still quite young, Abercrombie developed a keen interest in linguistics during the family’s time in Berlin, where Gertrude had become fluent in German. Additionally, Abercrombie’s parents were part of a traveling opera company, and Gertrude would also develop her musical chops as a vocalist with a penchant for jazz. Her formal education included earning a degree in Romance Languages from the University of Illinois (1925), then later exploring her artistic yearnings with commercial art courses at the School of the Art Institute and a brief stint at American Academy for Art in Chicago. She would then pursue a career in art after finding a job as a department store commercial artist. These endeavors would convince Abercrombie she should focus full time on developing her painting skills, which she did starting in 1932 at the age of 22. One year later, she became a part of the Public Works of Art Project (PWAP). The PWAP was launched during the Great Depression as a way to help support artists by engaging their services to decorate public dwellings. Paid anywhere between $38-$46.50 a week, Abercrombie was one of nearly four thousand artists that collectively created 15,663 pieces of artwork based on images associated with the “American scene” (think Grant Wood’s 1930 painting “American Gothic”). Gertrude was empowered by her inclusion in the PWAP, and this sense of inclusion with her peers would help inspire the young artist to further develop her style.
Success would come reasonably quickly for Abercrombie, and by the early 40s, she was the toast of New York after her first solo show in the city. Gertrude would return to Chicago and hold a show at the Art Institute’s Chicago Room, after which she would be referred to as “the queen of the bohemian artists” and the “Queen of Chicago.” Her solitary style of surrealism often included lonely self-portraits and nocturnal images of cats and owls. A quote attributed to Abercrombie shed some light on the starkly beautiful visions of the artist and how she came to create them:

“I am not interested in complicated things nor in the commonplace, I like to paint simple things that are a little strange. My work comes directly from my inner consciousness, and it must come easily.”

When Abercrombie wasn’t painting, she was busy hanging out with luminaries of the jazz scene like Charlie Parker, Sarah Vaughn, and Sonny Rollins. To say the least, her life was busy, if not chaotic, and she would struggle with vice – like many of her famous friends—specifically alcohol. In contrast to her life, her paintings depict calming, isolating scenes, many of which were conjured from her memories as a child growing up surrounded by the landscape of Aledo, Illinois. As we are all spending a lot more time alone right now, I found Abercrombie’s paintings somewhat comforting and very relatable. I hope you do too. 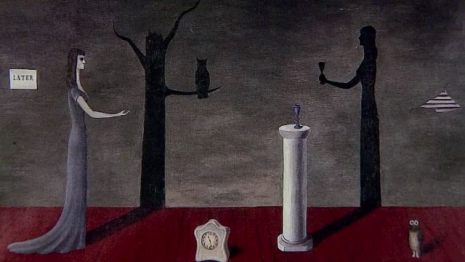