Demo-2 will be the first crewed orbital launch from American soil in nearly a decade. 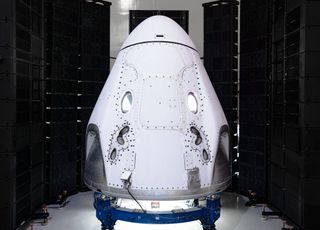 SpaceX's next Crew Dragon spacecraft, the Demo-2 vehicle, is seen after completing acoustic testing in Cape Canaveral, Florida ahead of its first crewed launch in 2020.
(Image:

SpaceX)
The first crewed orbital launch from American soil is scheduled to lift off just two months from now, despite the coronavirus outbreak.
NASA and SpaceX are targeting mid- to late May for the launch of Demo-2, which will send agency astronauts Doug Hurley and Bob Behnken to the International Space Station (ISS) aboard SpaceX's Crew Dragon capsule, NASA officials confirmed in a media advisory on Wednesday (March 18).


The Demo-2 target date is roughly in line with previous reports, which indicated SpaceX was aiming for an early May liftoff. But, like other launch targets, this one is not set in stone. The media advisory says that mid- to late May is the earliest possible window, and that NASA and SpaceX are closely tracking the coronavirus pandemic, which has caused widespread disruption to work and travel around the world.
"NASA is proactively monitoring the coronavirus (COVID-19) situation as it evolves," NASA officials wrote in the advisory. "The agency will continue to follow guidance from the Centers for Disease Control and Prevention and the agency's chief health and medical officer and communicate any updates that may impact mission planning or media access, as they become available."
Demo-2 will be the second flight to the ISS for Crew Dragon. One of the capsules aced an uncrewed test flight to the orbiting lab, called Demo-1, in March 2019. If Demo-2 goes well, SpaceX can start prepping for contracted crew flights to the ISS, which the company will fly under a $2.6 billion deal it signed with NASA in 2014. (The cargo version of Dragon has flown many robotic resupply flights to the ISS for NASA, under a different contract.)
Boeing also holds a NASA commercial-crew deal, a $4.2 billion contract that the aerospace giant will fulfill using a capsule called Starliner. But Starliner failed to reach the ISS as planned on its version of Demo-1, the Orbital Flight Test (OFT), which launched in December 2019.
Post-flight analyses of OFT data revealed several software problems that Boeing needs to fix, NASA officials have said. So, it's unclear at the moment when Starliner will fly again.