(CNN)Australia’s Great Barrier Reef has likely experienced its most widespread bleaching event on record, according to a US government scientist who monitors the world’s coral reefs.
This marks the third mass bleaching event on the reef in just the last five years. 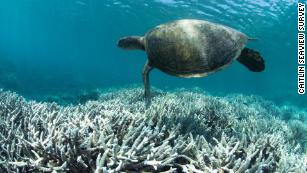 Climate change could kill all of Earth’s coral reefs by 2100, scientists warn
And scientists say that the rapid warming of the planet due to human emissions of heat-trapping gases are to blame.
On the heels of severe bleaching events in 2016 and 2017 that left half of the coral on the Great Barrier Reef dead, scientists fear this one could be a devastating blow.


“If we do not deal with climate change quickly … we are going to continue to see more severe and more frequent bleaching, and we are going to see the loss of coral reefs in much of the world,” said Dr. C. Mark Eakin, coordinator of the National Oceanic and Atmospheric Administration’s (NOAA) Coral Reef Watch.
close dialog
The mass bleaching conditions were observed by Coral Reef Watch, which uses remote sensing and modeling to predict and monitor for signs of bleaching. 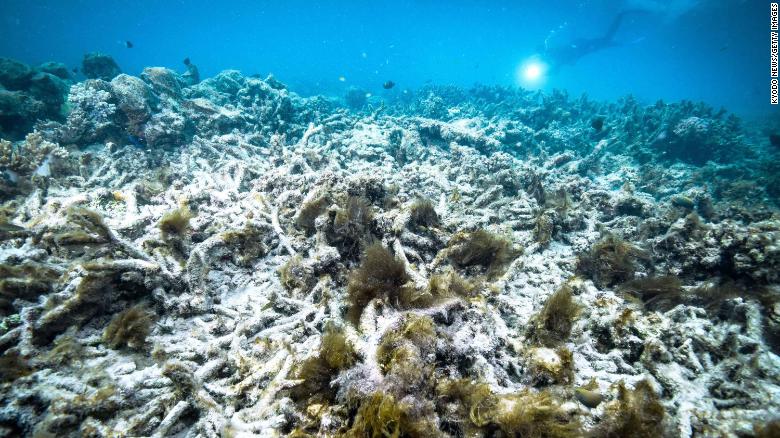 A file photo taken in October 2016 shows coral bleaching on the Great Barrier Reef in Australia. Scientists say that another mass bleaching event has occurred in 2020.
Eakin says that the bleaching in 2016 and 2017 was extremely intense, but severe damage was concentrated in a few hotspots in the northern and central parts of the reef.
Early indications show that this latest event was not as damaging, but that a much larger area of reef experienced at least some bleaching.
Past bleaching events have typically occurred in years with a strong El Niño-Southern Oscillation, a climate phenomena that can increase the odds of a host of extreme weather events around the globe.
El Niño is characterized by warmer waters in the Pacific ocean, which makes bleaching events in the region more likely. But there is no El Niño currently, which Eakin says makes this bleaching that much more surprising — and frightening.
“The upper ocean has absorbed a tremendous amount of heat in recent years, and it has really put coral reefs around the globe much closer to their upper thermal limits.”


Why the Great Barrier Reef is so critical

Coral reefs are some of the most vibrant marine ecosystems on the planet — between a quarter and one-third of all marine species rely on them at some point in their life cycle.
And none is more vital than the Great Barrier Reef.
Covering nearly 133,000 square miles, it is the world’s largest coral reef and is home to more than 1,500 species of fish, 411 species of hard corals and dozens of other species.
It’s also a vital resource to Australia’s economy, contributing more than $5.6 billion annually and supporting tens of thousands of jobs.
The abnormally hot ocean temperatures that led to this year’s bleaching began in February and stretched all the way into early March. As you can see from the animation below, almost the entire reef was under a bleaching alert from mid-February until mid-March.

Temperatures have since cooled and the bleaching has subsided, but scientists in Australia are currently assessing the damage to the reef’s health.
A fuller picture should come into focus in the coming weeks. Though initial reports indicate that this year’s bleaching may not be as severe as in 2016 or 2017, Eakin says it appears few parts of the reef have been spared.
“This time it is not as intense, but it’s much more widespread, so we’re seeing it all over the Great Barrier Reef,” he said.

Warm ocean temperatures are the main driver of coral bleaching.
Corals turn white as a stress response to warm water temperatures by expelling the algae that grows inside them, which is their main energy source and gives them their color. 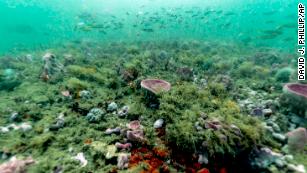 Oceans are warming at the same rate as if five Hiroshima bombs were dropped in every second
Bleaching doesn’t kill coral immediately. But if temperatures remain high, eventually the coral will die, destroying a natural habitat for many species of marine life.
“When they’re bleached, corals are starving, injured and more susceptible to disease, so [recovery] is really a question of how long and intense the heat stress is and how healthy the coral was to begin with,” Eakin said.
For the Great Barrier Reef to fully recover from bleaching that has occurred would take decades, Eakin says.
But because of the massive amounts of heat the world’s oceans have already absorbed, the reef likely won’t have the chance to recover before it bleaches again.
“If it takes decades for a reef to recover … what chance do we have for reefs recovering when events are coming back this fast?” he said.
Though researchers around the world are exploring ways to revive reefs, Eakin says those efforts will not be enough if we don’t address the root cause of their demise — human-caused climate change.
“We have to address climate change if we want to have coral reefs in the future.”
CNN’s Rebecca Wright, Ivan Watson, Anna Cummins and Ben Westcott contributed to this report