We've been laying out the possible case for the next phase of the COVID-19 pandemic could be social unrest.
Millions of Americans have just lost their jobs, have no saving, and insurmountable debts, are flooding food banks across the nation to survive. With the economy crashed and now entering a depression, last week was a significant milestone in the progression of the crisis, as looting of businesses in California and South Carolina began.
Now the looting is spreading across the nation. We noted how stores in New York, San Francisco, Seattle, and Chicago, were boarding up their windows, preparing for civil unrest.
After all, when 10 million people lose their jobs in two weeks, and an estimated unemployment rate that could reach 15-20% in the second quarter, as per RealInvestmentAdvice.com's Lance Roberts latest report, the ripple effect on society is so sudden that there could very well be an outbreak of unrest when the weather shifts too much warmer trends, and geographically be situated in low-income areas of inner cities. Hence why the National Guard was called up and now being positioned around and or in major metros.
The beginning innings of social unrest could now be unfolding across New York City. Households are cracking as hundreds of thousands have lost their jobs over several weeks. The city has become the epicenter of the virus crisis, recording 103,060 confirmed cases and 2,935 deaths (as of Saturday afternoon, April 4).
The Wall Street Journal reports an increase in burglaries of commercial establishments across all five boroughs from March 12-31, coinciding when mass shutdowns went into effect.
The New York City Police Department (NYPD) recorded a 75% jump in burglaries of businesses during the period, or about 254 burglaries, compared with 145 over the same period last year.

"The increase in burglaries coincided with steps to stop the spread of the coronavirus. On March 15, the city ordered restaurants and bars to cease on-site service, prompting many establishments to close altogether or limit operations. A March 20 decree by Gov. Andrew Cuomo called for the closure of all nonessential businesses, leading many retail stores to shutter," the Journal noted.

"We knew with the closing of many stores that we could see an increase and, unfortunately, we are," said NYPD Chief of Crime Control Strategies Michael LiPetri.
LiPetri said the most targeted establishments by criminals had been restaurants, supermarkets, and retail stores. Between March 12-31, there were over 30 reports of burglaries of supermarkets, a 400% increase over the same period last year.
He said thieves were specifically after food, alcohol, and retail goods. Many gained entry from rooftops and or forcing doors open or breaking windows.
The Journal notes that some retail chains have boarded up shops across the city, citing fears that social unrest could soon follow. Here are some shops that have already boarded up windows:

Store owners boarding up buildings across Manhattan: http://fox5ny.com  - NEW YORK - A growing scene for those who venture out into the streets of Manhattan these days is boarded up storefronts. From luxury retailers to small… http://dlvr.it/RT8G84 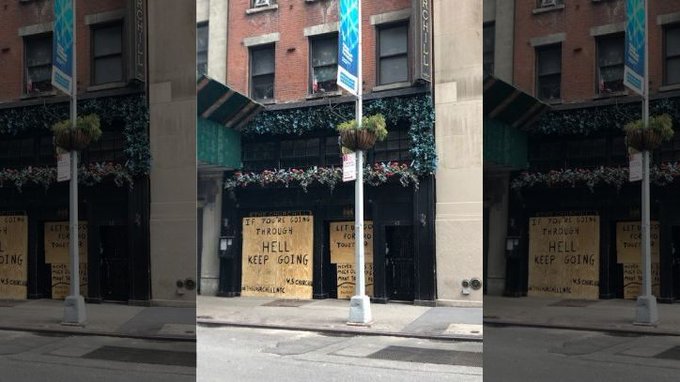 As looting surges in New York City, the next fear is that the NYPD could become overwhelmed by virus-related incidents and or a shortage of officers.
On Friday, one out of every six NYPD officers was sick or in quarantine. Over 1,500 have tested positive for the virus, which could lead to decreased patrols while crime is surging across the city.

"It's a worst-case scenario across the board," a sergeant told The New York Times.

And now it should make sense why President Trump recently signed an executive order to activate up to one million troops – that is because the evolution of the virus crisis and economic collapse, is social unrest and looting and whatever else that may bring.