Latest topics
» Has A Stone Wall Been Found On Mars That Proves Life Was Once There?

Today at 5:53 pm by PurpleSkyz

Today at 5:38 pm by PurpleSkyz

Today at 5:28 pm by PurpleSkyz

Today at 3:55 pm by PurpleSkyz

Today at 3:34 pm by PurpleSkyz

Today at 3:19 pm by PurpleSkyz

Today at 3:14 pm by PurpleSkyz

Today at 3:12 pm by PurpleSkyz

Today at 3:08 pm by PurpleSkyz

Today at 2:41 pm by PurpleSkyz

Yesterday at 1:57 pm by PurpleSkyz

Yesterday at 1:20 pm by Consciousness Of Economic

Yesterday at 1:19 pm by Consciousness Of Economic

Yesterday at 1:18 pm by Consciousness Of Economic

The Securities and Exchange Commission (SEC) has revealed that it’s obtained an asset freeze of and have halted an ongoing securities fraud perpetrated by a former Washington state senator David Schmidt and two Florida residents Robert Dunlap and Nicole Bowdler, for ripping off investors in and outside the U.S. More than USD $4.3 million was allegedly stolen from more than 150 investors in and outside the U.S.

Schmidt was a State Senator in Washington State from 2003-06 . No stranger to controversy, in 2011 the Public Disclosure Commission of Washington State claimed that Dave improperly reimbursed himself $32,260 in unspent donations for wages and $9,258 on mortgage payments and association fees for his condo for serving in the Senate. In 2012, Schmidt was fined USD$10,000 for using campaign funds for personal use.

Prior to the charges, the former Washington state senator had a photo of a gold vault on his website, according to Iraqcurrencywatch ,  where he said:

“… we are moving into the new “Golden Age” where the world’s gold will be released for a shift and change to our planet and our world.  Dave has countless photos of this gold that is beyond most people’s comprehension.  This gold has been kept hidden from the public for thousands of years and is kept in custody by “keepers” at various locations around the world.”
From the former site of Schmidt: 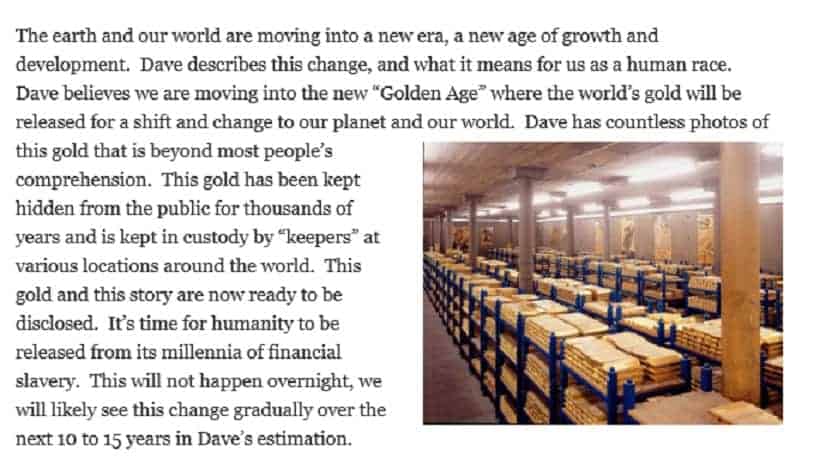 The SEC’s complaint alleges the team marketed and sold a purported digital asset called the “Meta 1 Coin” in an unregistered securities offering conducted through the Meta 1 Coin Trust.

“As we allege, the defendants made audacious claims about the Meta 1 Coin and would say almost anything to separate investors from their money,” said David Peavler, Regional Director of the SEC’s Fort Worth Regional Office.  “Investors should always look sceptically at promoters who claim that their investment cannot lose value or that investors will receive massive returns, stated an SEC press release.”

The complaint alleges that the defendants made numerous false and misleading statements to potential and actual investors, including claims that the Meta 1 Coin was backed by a $1 billion art collection or $2 billion of gold, and that an accounting firm was auditing the gold assets.

The defendants also allegedly told investors that the Meta 1 Coin was risk-free, would never lose value and could cough up a 224,923 per cent return.

According to the complaint, the defendants never distributed the Meta 1 Coins and instead used investor funds to pay personal expenses and funnel proceeds to two others, Pramana Capital Inc. and Peter K. Shamoun.

Admin
Posts : 96532
Join date : 2012-01-04
Location : Woodstock Nation
My goodness I had forgotten so many of the different grifts this conman has perpetrated over the years! Whew!
Thanks Nash!
TICK TOCK DAVEY