Latest topics
» POOPness for MAY 29: A PLACE TO CALL HOME - OH POOR ME SEND ME MONEY SUCKERS

Today at 5:43 pm by PurpleSkyz

Today at 5:19 pm by Consciousness Of Economic

Today at 5:18 pm by Consciousness Of Economic

Today at 5:01 pm by PurpleSkyz

Today at 2:45 pm by Consciousness Of Economic

Today at 2:38 pm by Consciousness Of Economic

Today at 8:22 am by nairatmya@hushmail.com 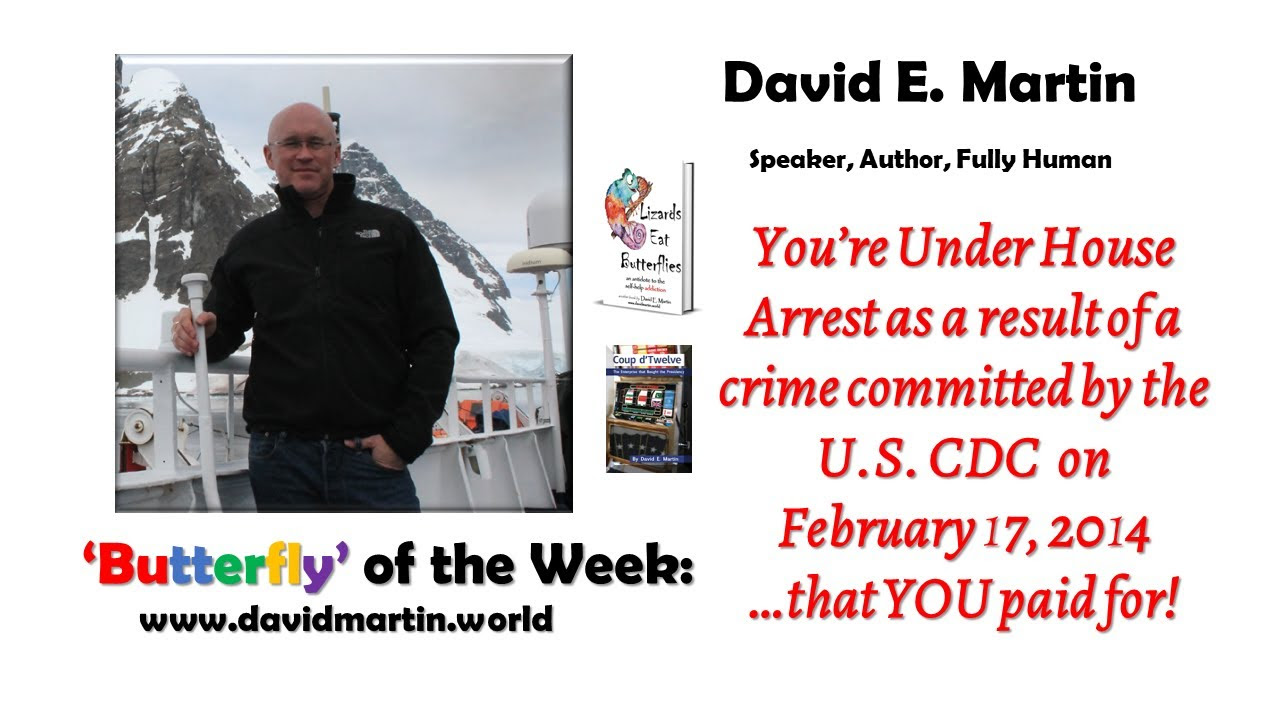 Last week, we saw a video featuring Dr Rashid Buttar, in which he reminded us that after a US Federal Case resulted in a moratorium on the weaponization of SARS coronaviruses in the US and in order to protect the CDC’s patent on SARS, Anthony Fauci oversaw a $3.7 million grant given to the Wuhan Institute of Virology for it to illegally develop the very same novel coronavirus that has since culminated in his forceful and repeated recommendations to shut down the global economy.

Dr Buttar also reminded us that Fauci, through the NIAID owns a 50% share in the patent on a protein made from HIV that helps to more efficiently deliver vaccine material throughout the body. This patent is being used by some of the companies now developing vaccines for the coronavirus.
Therefore, NIAID, through Fauci has both financed the development of the virus behind the plandemic, and it will collect half the royalties on its eventual vaccine!
If this isn’t racketeering of the most headspinning and depraved sort, I don’t know what is! When a friend called me up last week to say he and some friends might put together a RICO case, I wasn’t surprised.
It’s time to get legal on their ass – and inventor, author, financier and futurist, Dr David E Martin has done just that by submitting a Request for an Investigation into a possible Anti-Trust Violation to the Office of the Inspector General for the United States Department of Health and Human Services on April 22, 2020 and he has drafted a potential Anti-Trust case against HHS, CDC, NIAID, etc., of which this video is an Exhibit:
Citizens of the United States of America
v.
United States Department of Health and Human Services Centers for Disease Control and Prevention
Robert R Redfield, et al.
National Institute of Allergy and Infectious Diseases
Anthony Stephen Fauci, et al.
Governors of All States Issuing Executive Orders abridging the 1st Amendment of the Constitution
University of North Carolina, Chapel Hill
Professor Ralph Baric, et al.
And unknown Parties

Dr Martin writes:
“In this inquiry, it is presumed that the CDC and its associates were: a) fully aware of the work being performed using their patented technology; b) entered into explicit or implicit agreements including licensing, or other consideration; and, c) willfully engaged one or more foreign interests to carry forward the exploitation of their proprietary technology when the US Supreme Court confirmed that such patents were illegal and when the National Institutes of Health issued a moratorium on such research.
“The aforementioned items appear to constitute, “contract, combination in the form of trust or otherwise, or conspiracy,” as defined under 15 US Code § 1.
“Under 15 U.S. Code § 1 (the Sherman Antitrust Act) ‘Every contract, combination in the form of trust or otherwise, or conspiracy, in restraint of trade or commerce among the several States, or with foreign nations, is declared to be illegal. Every person who shall make any contract or engage in any combination or conspiracy hereby declared to be illegal shall be deemed guilty of a felony, and, on conviction thereof, shall be punished by fine not exceeding $100,000,000 if a corporation, or, if any other person, $1,000,000, or by imprisonment not exceeding 10 years, or by both said punishments, in the discretion of the court.'”
His lawsuit additionally points out that on December 31, 2019, the Chinese government informed the World Health Organization (WHO) that many SARS cases were being treated in the Wuhan area and the CDC reported the first US case of SARS-CoV like illness in January 2020 with the CDC’s Epidemic Intelligence Service reporting 650 clinical cases and 210 tests.
There are only two ways this is possible. Either the CDC:
“a) had the mechanism and wherewithal to conduct tests to confirm the existence of a ‘novel coronavirus’; or, b) did not have said mechanism and falsely reported the information in January. It tests credulity to suggest that the WHO or the CDC could manufacture and distribute tests for a ‘novel’ pathogen when their own subsequent record on development and deployment of tests has been shown to be without reliability.
“Notwithstanding, the CDC and WHO elected to commit to a narrative of a novel coronavirus – exhibiting properties that were anticipated in the U.S. Patent 7,618,802 issued to the University of North Carolina Chapel Hill’s Ralph Baric – and, in the absence of testing protocols, elected to insist that SARS-CoV-2 was the pathogen responsible for conditions that were consistent with moderate to severe acute respiratory syndrome.
“On March 4, 2020, California Governor Gavin Newsom appears to have violated the law of the State of California by issuing Executive Order N-33-20 based on the ‘threat of COVID-19’ with no evidence that such threat existed as confirmed by serology or confirmed immunologic evidence. The Government Code sections cited in the Order (Government Code sections 8567, 8627, and 8665) require that criteria be met which do not include the ‘threat’ of any condition but evidence of said condition. At that time, neither the CDC nor the WHO had sufficient testing in place to: a) confirm and isolate ‘a novel coronavirus’ from other coronaviruses; b) California did not have pathology data to suggest that an epidemic was imminent; and, c) the rest of the United States was equally incapable of making any such assessment as a result of the aforementioned conspiring parties actions. Governor Newsom’s Executive Order, followed by numerous other similar orders, all are based on the threat of a thing that may or may not exist.
“Around March 12, 2020, in an effort to enrich their own economic interests by way of securing additional funding from both Federal and Foundation actors, the CDC and NIAID’s Dr Fauci elected to suspend testing and classify COVID-19 by capricious symptom presentation alone. Not surprisingly, this was necessitated by the apparent fall in cases that constituted Dr. Fauci’s and others’ criteria for depriving citizens of their 1st Amendment rights…

“After inflicting grave harm to the citizens of the United States of America in economic hardships resulting from their allegation of an ‘epidemic’ or ‘pandemic’, the CDC and the NIAID set forth, and the President of the United States and various Governors in the respective States promulgated, standards for lifting conditions in violation of the 1st Amendment to the Constitution that serve exclusively to enrich them. Both the presence of a vaccine or treatment and, or, the development of testing – both that solely benefit the possible conspiring parties and their co-conspirators – are set as a condition for re-opening the country. This appears to be an unambiguous violation of the Sherman Act and, if so, should be prosecuted immediately to the full extent of the law.”
***
Many of my subscribers have written in to ask me what they can do about this awful situation and all I’ve been able to advise is for people to contact their local representatives and to demand an end to the illegal shutdown of their local businesses, freedom of movement, etc.
Well, Dr Martin has some legalese that we can wield, while we’re doing that! (See below).
***
Draft a Letter to ACLU, US Attorney for Your District, Congressman/Woman/Senator/Attorney General:
To Whom It May Concern: The Declaration of a State of Emergency and the ensuing lockdown – which exempts persons deemed “essential” without any basis in scientific fact or in Critical Infrastructure definition under the U.S. DHS –violates the legal standard set forth in Jew Ho v. Williamson, 103 F. 10, 26 (C.C.N.D. Cal. 1900).
Due to the facts outlined here: http://www.invertedalchemy.com/2020/04/covid-19-anti-trust-argument.html
1. The Governor of Virginia [change to your state] could not have known that there was a virulent outbreak caused by a single pathogen (reportedly SARS CoV-2) when declaring the State of Emergency;
2. No scientific evidence has been offered justifying the declaration – mere reporting of mortality and morbidity based on pneumonia symptoms does not an epidemic or pandemic make;
3. The Governor failed to provide adequate testing to confirm or deny the presence or absence of “a novel coronavirus” and, based on recent reports from incarcerated persons, it would appear that positive tests COULD NOT have been based on community transmission as 96% of confined persons have tested positive according to Reuters; and,
4. No effort has been made by the Governor or regional health authorities to overturn the established science published in JAMA that facemasks should not be worn by healthy individuals (https://jamanetwork.com/journals/jama/fullarticle/2762694) and that social distancing that involves the confinement of healthy individuals has neither been tested nor validated with any science whatsoever.
I kindly request that you take this matter up on behalf of the Citizens of Virginia [change to your state]
[your signature, name, etc]