Students and Activists Lead the Fight Against Facial Recognition

Students and Activists Lead the Fight Against Facial Recognition Fri May 01, 2020 10:11 am

Advancements in facial recognition tech have made it possible to identify us even when we’re covering our face, but a new wave of privacy advocates want to outlaw the algorithms across the U.S.
The Ban Facial Recognition campaign led by technology advocacy body Fight for the Future is spearheading an effort to get universities to commit to an outright ban on the surveillance mechanism.

Fight for the Future’s campaign kickstarted back in June 2019, with the launch of an interactive map that pinpoints locations in the U.S. where you might be targeted by facial recognition cameras.
But a recent surge of protests spread across college campuses was triggered by the University of California Los Angeles’ (UCLA) decision to test facial recognition tech. About 12 schools saw protests by students with a further 36 subjected to online activism via petitions.
[Keep up with the latest in technology and security. Sign up for the ExpressVPN blog newsletter.]

UCLA has a flawed history with facial recognition

UCLA first flirted with the idea of facial recognition software to boost campus security in 2019. The decision drew widespread criticism, with Fight for the Future rallying the troops.
To showcase the inaccuracies of facial recognition, Fight for the Future attempted to match the photos of over 400 UCLA faculty members and students with those in a mugshot database. The software misidentified 58 people, with the majority of those misidentified people of color.
UCLA eventually caved and agreed to reverse its original decision, outlawing the use of surveillance cameras. But the protests didn’t end there – students on campuses such as Yale Law School, University of Oregon, DePaul University, and more, picketed to force administrators to reconsider plans of adopting facial recognition. 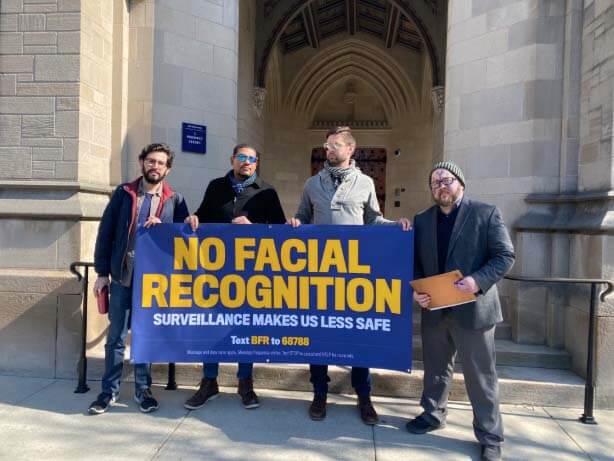 Dominique Coronel, one of the activists and a current student at DePaul University told The Guardian that prevailing anti-immigration attitudes and the use of facial recognition tech by U.S. Immigration and Customs Enforcement (Ice) to deport residents compelled him to take part.
“ Education should be a safe place, but this technology hurts the most vulnerable people in society,” he added.
Digital rights activist Sean O’Brien, who also heads up the Yale Cybersecurity Lab, was at the forefront of protests at his campus.
“I became part of the Fight for the Future campaign to ban facial surveillance because of a deep-seated feeling of dread about the technology,” Sean told ExpressVPN. “ We’ve known for some time that the tech is biased against vulnerable populations, but now we know that hundreds, if not thousands, of institutions were hiring sketchy third-party vendors such as Clearview AI who centralized and shared facial profiles globally without any consent.”

According to a BuzzFeed investigation, more than 50 educational institutions across 24 states in the U.S. were part of Clearview’s client list, including high-profile names such as Columbia University, the University of Alabama, and Southern Methodist University.
Clearview’s been under fire recently after scraping more than a billion images from the internet and hawking its technology to law enforcement departments and security agencies. Activists say that the practice is illegal, and the photos were obtained without any consent.
“Everyone has a right to communities free from surveillance by unaccountable tyrannies, such as the companies behind facial recognition technology,” asserted Sean. “The tech jeopardizes personal privacy and reduces the quality of life [of U.S. residents], but worse than that, it seriously threatens our autonomy and social mobility.”
In an eerily Orwellian take, Sean told ExpressVPN that dozens of students at Yale signed the online petition and expressed support for the fight against facial recognition, but only a few appeared physically to protest, likely spooked by long-term repercussions of their actions.
We’ve known that instead of freeing us, the internet makes us conform but the effects seem to be getting stronger and stronger.

The protests are working

Fight for the Future’s advocacy is having an effect, though. Harvard, Columbia, the University of Michigan, Oberlin College, and UCLA have now taken a public stand not to use facial recognition. In total, about 50 educational institutions have confirmed that they have shelved plans to use the technology with more likely to follow suit.
“Can we trust that our profiles tied intimately to our face, perhaps our most personal feature, will be handled securely and without data breaches by organizations who already leak massive amounts of data on millions of people?”, asked Sean, vowing to push ahead with his activism until the fight against facial recognition is won.