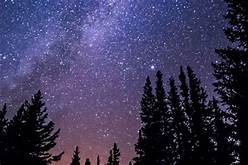 When you gaze up at the night sky remember that we're in space, cruising through the solar system on our pale blue dot, with a vast, three-dimensional universe all around us. And we have an outstanding view! The night sky is the deepest, most open expanse of space you could possibly look into. Here's a look at what you're seeing when gazing at the sky in May: Looking toward the west in the hour after sunset, here are the bright objects you'll most likely be able to see: The closest of these objects is the planet Venus in our own solar system, at about 35 million miles from Earth. The next closest is the star Sirius. It's the brightest star in our sky, and also one of the most nearby, at about 9 light years away. Several other bright stars in the May early evening sky are a couple, to a few dozen, light years away. Much farther out is the red giant star that forms the shoulder of Orion, Betelgeuse, at around 500 light years from Earth. And although you might not be able to see it, the faint band of the outer Milky Way stretches across the sky here. So when you're looking westward in May's early evening sky, think about how you're looking outward through the disk of our galaxy, toward its outer edges, thousands of light years away. You'll get a different perspective looking into the sky in the hour before sunrise. Facing south, the nearest objects are: the Moon, at about 240,000 miles away, then Mars, Jupiter and Saturn, at hundreds of millions of miles. The rapidly rotating star Altair and the star Fomalhaut, with its debris disk and orbiting planet, lie much farther away, at 17 and 25 light years from Earth. And the May morning sky also has its own very distant red giant star: Antares, at 554 light years away. And finally, across the background, visible under very dark skies is the Milky Way. Here, you're looking into the center of the Milky Way galaxy — densely packed with stars and a supermassive black hole, some 27,000 light years from Earth. The night sky that begins right above your own roof is really the shore of a deep cosmic ocean. Happy Skywatching!