SEALED COURT DOC NAMES 70 PEOPLE WHO ‘KNEW OF SEX TRAFFICKING AND UNDERAGE VICTIMS’ BY JEFFREY EPSTEIN Wed May 06, 2020 8:31 am 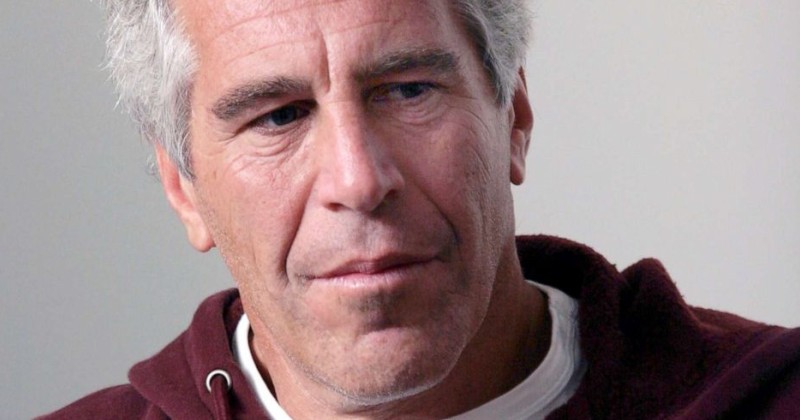 Source: Jamie White | Infowars.com
A court filing by one of financier Jeffrey Epstein’s underage victims identifies as potential witnesses over 70 men and women alleged to have knowledge of the billionaire pedophile’s sex trafficking of underage girls.
Virginia Roberts, one of Epstein’s most well-known accusers, claimed powerful men like Prince Andrew, former New Mexico Governor Bill Richardson, and former Senate Majority Leader George Mitchell (D-ME) were among those who “had knowledge of Ghislaine Maxwell and Jeffrey Epstein’s sexual trafficking conduct and interaction with underage minors,” according to documents obtained by The Sun Monday. 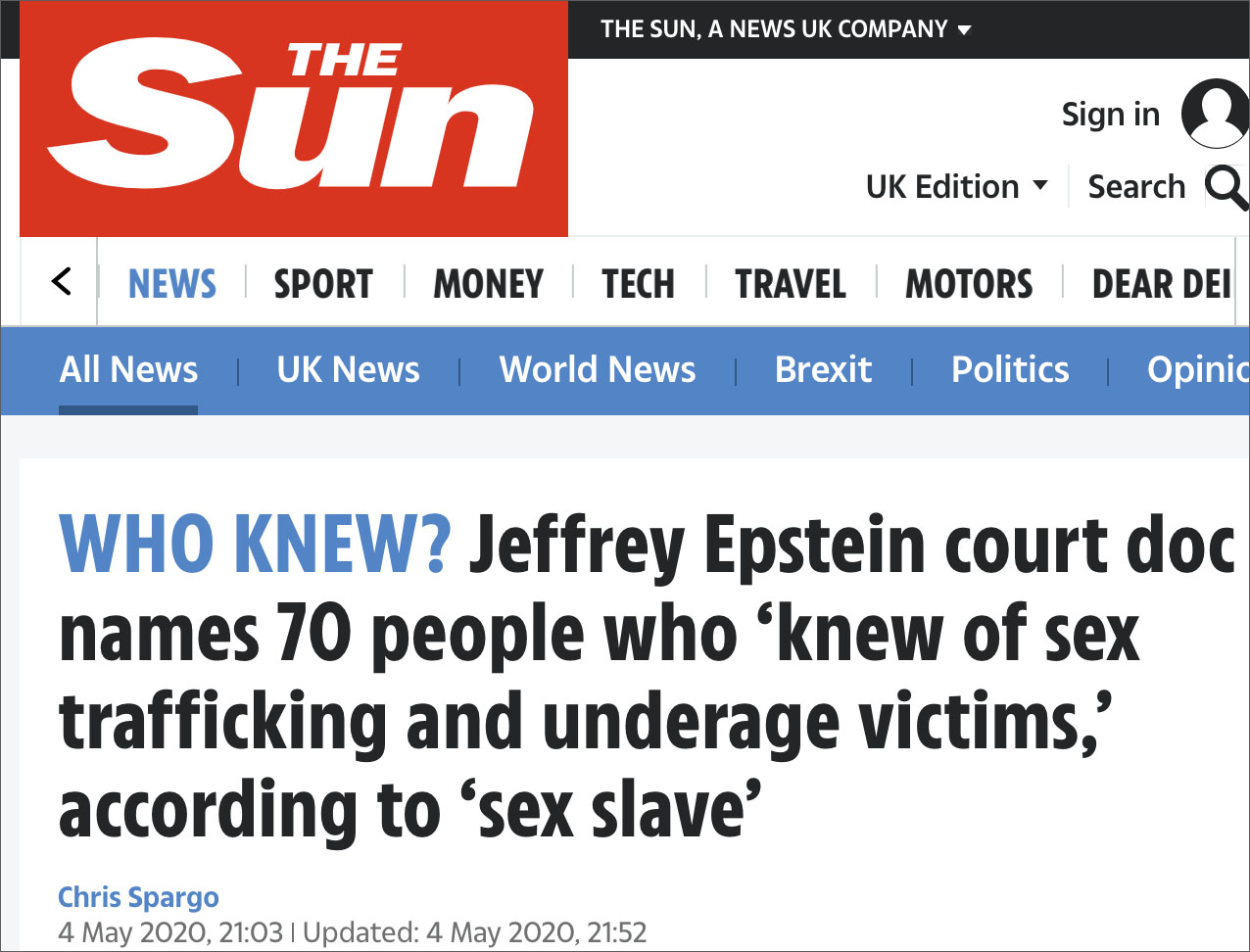 From The Sun:
HAS KNOWLEDGE OF GHISLAINE MAXWELL AND JEFFREY EPSTEIN’S SEXUAL TRAFFICKING CONDUCT AND INTERACTION WITH UNDERAGE MINORS
GHISLAINE MAXWELL
Roberts has alleged that Maxwell also sexually abused her by forcing her to engage in threeseomes with herself and Epstein.
JEAN-LUC BRUNEL
The French model scout and former modeling agency manager who multiple women, including Roberts, have alleged they were trafficked to by Epstein.
RON BURKLE
Billionaire co-founder of The Yucaipa Companies, LLC, a private equity and venture capital firm that specializes in purchasing and then restructuring underperforming companies. He is close friends with Sarah, Duchess of York, and Bill and Hillary Clinton
ALAN DERSHOWITZ
Polarizing lawyer and Harvard professor whose past clients include President Trump, OJ Simpson and Epstein, whose sweetheart deal with state and federal prosecutors he helped broker back in 2008. Roberts has alleged that she was trafficked to Dershowitz, which he has denied. Roberts has since filed a lawsuit against him for defamation similar to the one she filed against Maxwell in 2015.
EVA AND GLEN DUBIN
The former girlfriend of Epstein and her doctor husband who Roberts has alleged she was trafficked to by Epstein and Maxwell.
PRINCE ANDREW ALBERT CHRISTIAN EDWARD, DUKE OF YORK
The eighth in line to the British throne, who Roberts has said she was trafficked to in London at the age of 17. Prince Andrew has denied this, despite Roberts having a photo of herself with Maxwell and the royal.
FREDERIC FEKKAI
The famed hairstylist was the go-to guy when it came to trimming the tresses of the young women in Epstein’s orbit, according to multiple reports and court filings. Fekkai has never been accused of engaging in any illegal activity.
TONY FIGUEROA
Robert’s ex-boyfriend who says that he was asked to recruit girls for Maxwell and Epstein when he was just 17.
CLARE HAZEL
Mystery associate of Epstein whose alleged link to the pedophile remains unclear but who flew with him on the “Lolita Express” – Epstein’s infamous sex plane.
STEPHEN KAUFMAN
Roberts claimed she was trafficked to Kaufman in a 2016 deposition. He has denied this accusation.
SARAH KELLEN
Epstein’s assistant who managed to avoid charges in Florida, reportedly as part of his sweetheart deal. Many of Epstein’s underage victims have alleged that Kellen scheduled their appointments and facilitated his abuse if underage girls.
BANU KUCUKKOYLU
A California-based money man who works at LUXE International Investments & Development, according to his LinkedIn and who was named in a deposition as a passenger on Epstein’s plane.
NADIA MARCINKOVA
A foreign-born model who many have identified as an accomplice in procuring underage girls for Epstein. She may be just as much a victim of the serial pedophile, however, who claimed to have purchased Nadia from her family at the age of 12.
GEORGE MITCHELL
The former senator from Maine and senate majority leader from 1989 to 1995. Roberts claims she was trafficked to the senator, an allegation that he denies.
DAVID ROGERS
Epstein’s pilot, whose flight logs offered proof that Epstein and Maxwell frequently travelled with Roberts when she was an underage.
ADRIANA MUCINSKA
Another Epstein assistant who helped to facilitate his encounters with underage girls.
EMMY TAYLOR
Maxwell’s assistant at the time that Virginia was allegedly being trafficked by the British-born socialite.
TOM PRITZKER
Billionaire hotel heir and cousin of Illinois governor J.B. Pritzker.
BILL RICHARDSON
The former governor of New Mexico, where Epstein owned the massive Zorro Ranch. Roberts alleged in a 2016 deposition that she was trafficked to the politician. He had been seen as a possible frontrunner for the Democratic nomination in the 2008 primary but dropped out around the same time that Epstein’s legal troubles in Palm Beach came to light.
HALEY ROBSON
The high school student who was a victim of Epstein, and then became one of his biggest recruiters in Palm Beach. She too avoided charges in the Palm Bach case.
LARRY VISKOSKY
Epstein’s pilot whose flight logs and deposition also provided definitive proof that Epstein knew and travelled with a number of his underage victims.
LESLIE WEXNER
The billionaire owner of Victoria’s Secret, The Limited and Bath & Body Works was Epstein’s most prominent client at his money-managing firm.
IGOR ZINOVIEW
The former Russian mixed martial arts fighter who became Epstein’s bodyguard.
MAY HAVE KNOWLEDGE OF GHISLAINE MAXWELL AND JEFFREY EPSTEIN’S SEXUAL TRAFFICKING CONDUCT AND INTERACTION WITH UNDERAGE MINORS
DOUG BAND
Bill Clinton’s former aide who travelled the world with Epstein and his boss.
RYAN DIONNE
A former chef of Epstein, who travelled with the pedophile.
ERIC GANY
The man tasked with managing Epstein’s finances.
ADAM PERRY LANG
A former chef of Epstein, who travelled with the pedophile.
PETER LISTERMAN
An associate of Epstein who was once described as “the world’s famous seller of young models to oligarchs” by Kristina Goncharova, a one-time Miss Teen Ukraine who alleges she was one of Listerman’s victims.
TODD MEISTER
Best known for his brief marriage to socialite Nicky Hilton, Meister’s hedge fund was given a huge boost with an investment from Wexner.
The list is interesting given Cindy McCain, widow of the late Sen. John McCain (R-Ariz.) candidly admitted in a January interview that the elite “all knew” about Epstein’s illegal activities.
“It’s like everything. It hides in plain sight. Epstein was hiding in plain sight. We all knew about him. We all knew what he was doing, but we had no legal aspect that would go after him,” she said.
“They were afraid of him. For whatever reason, they were afraid of him. All of a sudden, someone said ‘BS, we’re not afraid of you anymore and what you’re doing is not only wrong, but illegal’. It’s like a house of cards. It’s going to start tumbling,” she added.