OUT OF MIND » THE INSANITY OF REALITY » GOVERNMENT & THE NEW WORLD ORDER » Iran sent pink drone to Obama Posted on truther on February 10, 2012 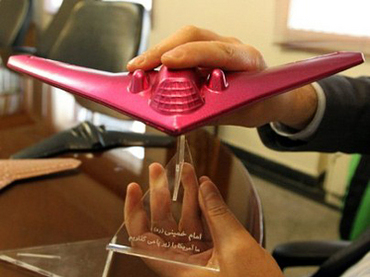 Their are some differences though: it’s pink, it’s about one eightieth the original size and being marketed as a toy in Iran.
According to some reports the toys have already hit selves In Tehran and carry a $4 price tag. The display of silliness has many US officials irate at the charade, but no need to get upset.
President Obama will be receiving his very own custom built toy drone as well.
“We wanted for Mr. Obama himself to have these toys and know that Iranians don’t leave anyone’s requests unanswered. We made the ‘RQ’ in pink as it is Mr. Obama’s favorite color and we will send it to him via the Swiss embassy,” said Seyyed Saeed Hassan-pour, head of the cultural department of the Aaye Company, to Reuters.


The day of arrival was set for February 1, but no official word of Obama getting the toy has been confirmed.
Back in December the drone was all over Iranian State TV. Footage of the drone surrounded by anti-American banners prompted the White House to officially submit a request to return the drone after it was captured near the Afghan border.
As RT reported, the US originally denied they lost a drone over Iran before changing their story and insisting that they lost contact with the craft during a surveillance mission over neighboring Afghanistan.
According to the US, the aircraft was flying around Eastern Afghanistan, but Iran argues it was well within the Iranian territory.
Iranian engineers hijacked the multi-million dollar stealth drone’s system and managed to ease the craft down to a safe landing.
Iranian ambassador Mohammad Khazaee submitted a complaint to the UN Security Council saying “the provocative and covert operations against the Islamic Republic of Iran by the US government, which have increased and intensified in recent months.”
Khazaee went on to say the “American RQ-170 unmanned spy plane, bearing a specific serial number, violated Iran’s airspace.” He added Iran “strongly protests such hostile and aggressive moves and warns about harmful consequences of the repetition of such actions.”
Iran’s ambassador demanded a US apology for the incident, but has yet to receive it.So Iran has decided to take matters into their own hands.
“We decided to show that we can deal with this issue in a very friendly and peaceful manner and put it in the playful hands of the children of Iran to pursue a ‘soft war’ with Mr. Obama and the US. This was the aim of producing this aircraft,” Hassan-pour concluded.

OUT OF MIND » THE INSANITY OF REALITY » GOVERNMENT & THE NEW WORLD ORDER » Iran sent pink drone to Obama Posted on truther on February 10, 2012