» Another Warrior Has Fallen, Andre Vltchek is Dead

» Massive spacecraft caught by two NASA satellites near the sun

» Decades After Its Discovery, the Betz Sphere Remains a Scientific Mystery 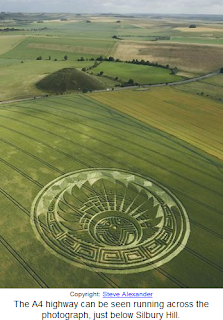 
The latest bizarre event took place yesterday morning (7th) at
approximately 5.0 AM, when a Wiltshire Police Sergeant was driving in
his private car towards Marlborough on the A4 highway and about to pass
Silbury Hill on his left.

He looked to his right and witnessed
three exceptionally tall beings inspecting the new crop circle which
appeared there on the 5th July. He stopped his vehicleand watched them
for several minutes because they stood out as odd. Each of them
were well over six feet tall, each had blond hair and also they all were
wearing one piece white suites, with hoods that had been dropped onto
the back of their heads.

After a few minutes watching them, he said they were appeared to be examining the crop in the
circle, he shouted at them from a distance of about 400 yards but they ignored him.

As soon as he entered the field, they became aware of him and ran at an amazing speed to the south, away from Silbury Hill. He said I recognised that I could never catch up with them they ran so exceptionally fast. He glanced away for just a few seconds and looked back to find that they had completely vanished. He became very uneasy and left the scene.

The
police officer was very aware of hearing a static crackling sound in
the field and around him. He said as the plants moved around, he could
see the movement coincided with the level of sound, as if the static was
effecting the plants by moving them.

He also started to
experience a headache in the field, which became worse as the day went
on and he could not shake it off all day.

According to another
eyewitness who lives near by Silbury Hill " He also saw helicopter
hovering over a field on the same day later on at 9 pm till 11 pm ." 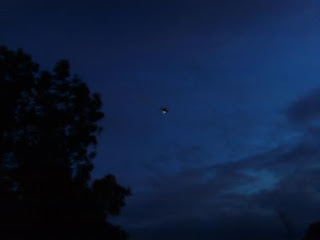 He
said: I took some vid footage of it but light wasn't good,but managed
to take a couple of photos with flash that came out well.For some reason
it was stationary above a field shining a spot light down on it?After I
took a couple of photos of it,it shone the light on me and then turned
it off!still hovering for about 10 min above me and about 50 meters in
front of me.It then started to fly in a circle around the field about 3
times.

The reason I went up to have a look is with the recent
crop circles near swindon i thought might be something in that field and
i was told last night that 3 police cars roared up through my village
towards the direction it was with their lights flashing but sirens off
at 9 pm.


According to another eyewitness who live in Bath which is not
that far from Silbury Hill and Stone Henge. " I drive past Stone Henge
on my way to the A303 heading for London when i am working there.
Usually i have to be in London for around 8:30am so i have to leave Bath
at around 5am."

Anyway it was the summer solstice a couple of
weeks back and the normal "fake" druids appeared at the Henge to do
their made up chanting. It was all covered by the local and national
news and as per usual looked like a bit of a media fiasco which nobody
really takes seriously.

3 days after the Solstice i made the
journey to London and drove past Stone Henge at around 5:30am. I slowed
down to get a good look at the stones as i normally do because they are
quite an amazing sight that early in the morning and with no tourists
about. Standing inside the henge were around 15 - 25 people all dressed in robes which were not quite black, kind of a charcoal colour. They were all in a circle looking towards the center and they were all very tall. It really was a very uncomfortable sight and one which i found a bit strange because the solstice was 3 days previous.