OUT OF MIND » SUPER SCAMMERS!! RV & DINARIAN FRAUDS & THOSE THAT BUST THEM OUT! » DAVE SCHMIDT - COSMIC CONNECTION CONMAN » Dave Schmidt (Meta 1 Coin) The Worst Whitepaper In The World Award! Written By A 10 Year old?

Dave Schmidt (Meta 1 Coin) The Worst Whitepaper In The World Award! Written By A 10 Year old? 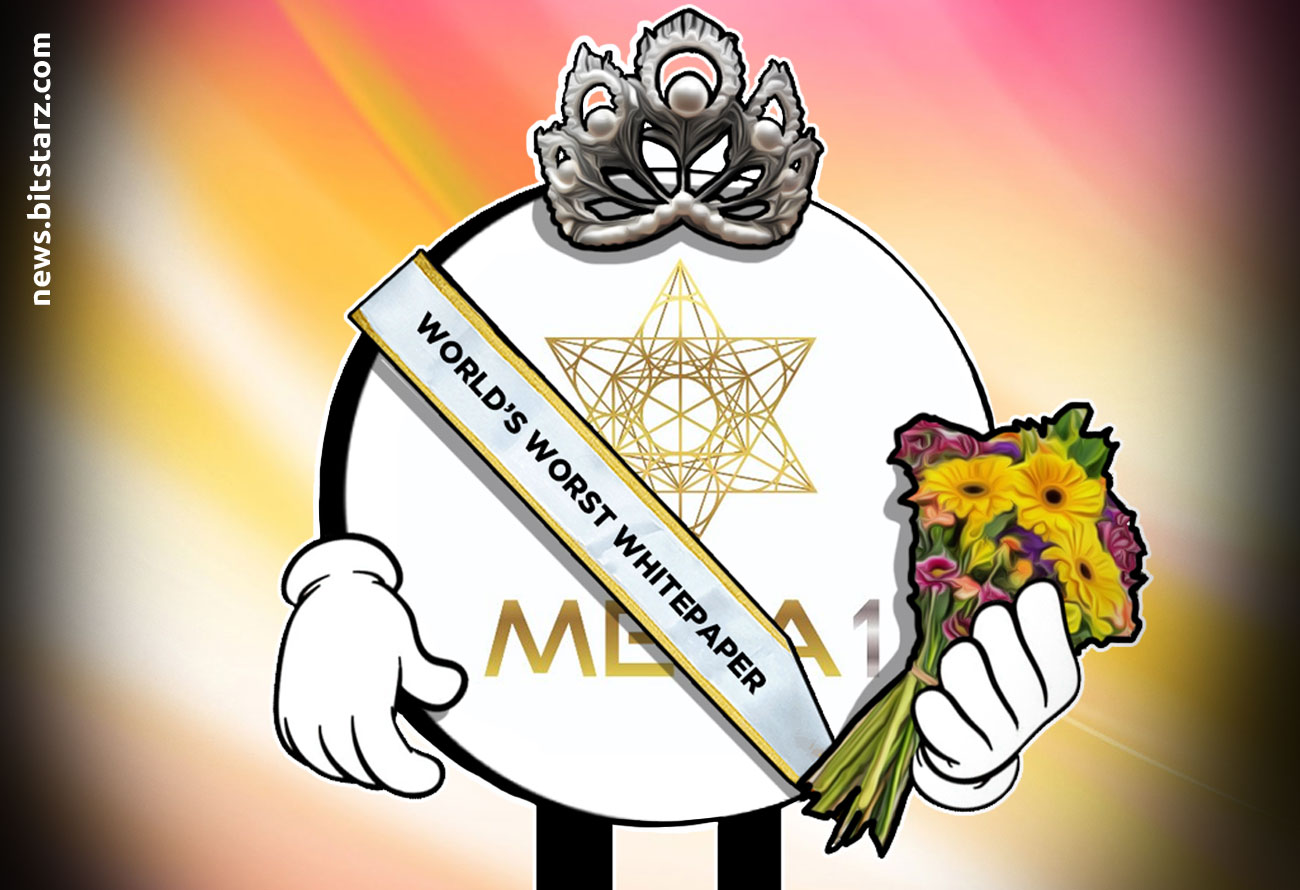 META 1 is a project that purports itself to be a “coin for humanity” when in fact it has been exposed as a complete scam by the Securities and Exchange Commission (SEC). The project, which still appears to be operating, managed to raise $4.3 million, most of which was spent by the team on everything apart from the project, including a $215,000 Ferrari.

As part of our regular research we of course looked at the [url=https://irp-cdn.multiscreensite.com/4d37b452/files/uploaded/META1 COIN WHITE PAPER-1.pdf]META 1 whitepaper[/url] , and were so staggered by what we saw that we immediately realized, rather like Frasier in Cheers, that it was so outstanding that it needed its own platform.

And so, ladies and gentlemen, we present our analysis of META 1 – the Worst Whitepaper in the World.

They say don’t judge a book by its cover, but sometimes you just can’t help it. Given that this is a project appealing to purveyors of gold and fine art, you would have thought the whitepaper would have a certain elegance to it in order to attract this type of clientele. One look at the front cover however and you can see that the ‘fine art’ element didn’t run to the brochure: 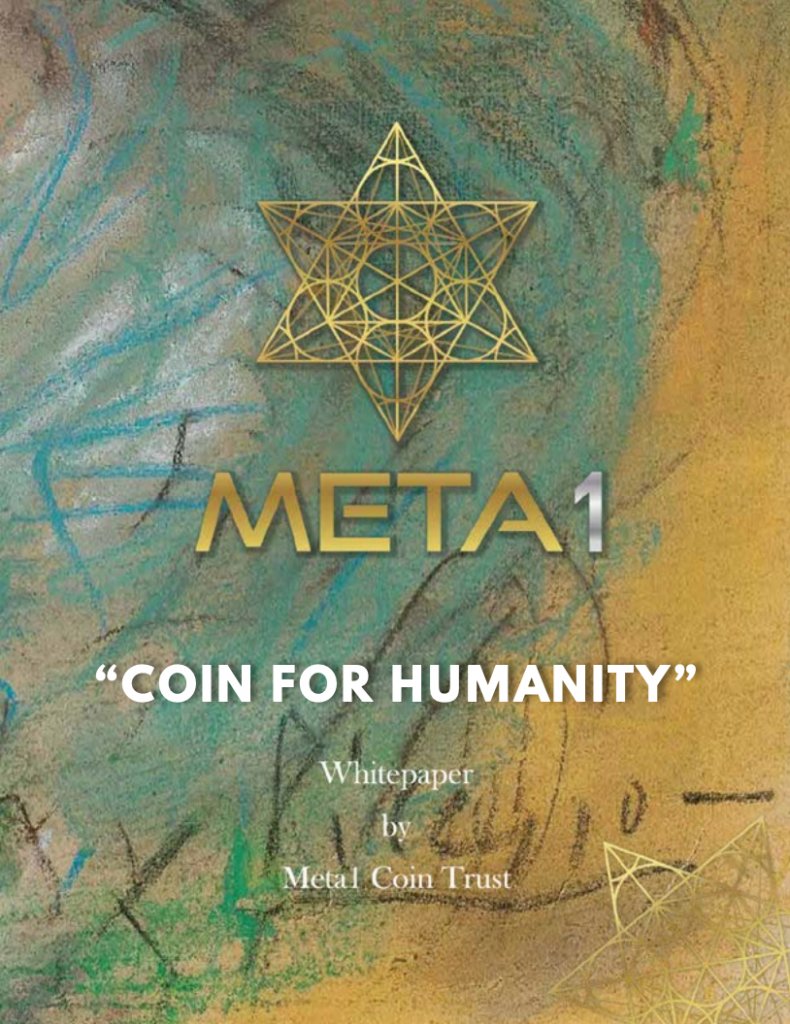 This complete monstrosity, which looks more like the cover of a self-published novel, can only have come about by fiving a ten-year-old access to PowerPoint and some 1990s clipart and told he had five minutes to complete it.

Sadly, this theme is present throughout the entire document, with images of the META1 logo and the coin appearing in terrible resolution wherever there is the tiniest piece of white space. Some of the best examples include:

The background of each page, and there are 58 of them, features various artworks (or the META 1 coin, naturally). We get why they used artworks as the backgrounds, after all this is supposed to be an art-themed token, but it is done in such a ham-fisted way that each page looks like it’s been put through a washing machine and badly ironed.

If the design doesn’t put you off, then the language certainly should. Again, those in the fine art world tend to be of the degree-educated, upper middle-class mold, and so would expect some finesse in the language as well as the design. Instead they get this belting opener:


META 1 Coin an asset-backed “Smart” Crypto Currency Secured by Humanities greatest expressions of Life. By Master artists such as Picasso and Van Gough. META 1 Coin is a coin for Humanity and built on the framework of abundance by smart contracts, unbreachable on the blockchain, ensuring appreciation and never devaluation. META 1 COIN has a Private Bank and Private Exchange ensuring liquidity, security, and unencumbered transactions. META 1 COIN has a Powered Blockchain ensuring high-performance Global transactions called the “METATRONIC NETWORK.” META 1 COIN has defined the path of the new systems of abundance and equity. Join the META FINANCIAL EVOLUTION.

This use of what seems to be an attempt at English is a theme throughout the paper, with spelling, grammar, and punctuation mistakes littering the piece like the author was being paid by the error.

Again, you might get away with this if you were pitching at the uneducated, but for a company that boasts a $1 billion art portfolio and a 17-person team you’d have thought one of them would know how to string a sentence together.

If that isn’t enough to whet your investing appetite, how about the partial repetition of a paragraph: 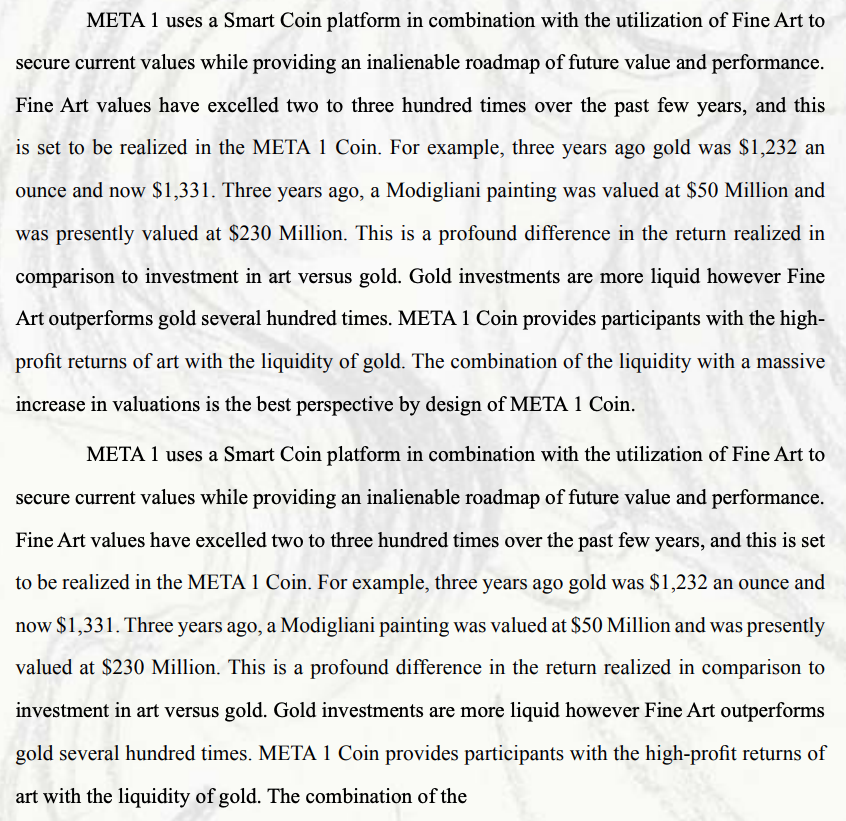 With this much attention to detail, who wouldn’t trust them to verify famous artworks?

Bang for Your Buck

When it comes to how your investment will perform, META 1 makes it plain and simple:


[The] coin value will automatically increase based on new Fine Art “assignment” to the META 1 Coin Trust. This contract is defined as nine-times (9X) the asset value plus the original asset value, divided by the “fixed” number of coins (450,000,000) equaling
the increased coin value per coin. In our proforma financial projections, the coin will increase in value by approximately $22.22 a coin per 1 Billion in asset assignment.

Did you get all that? No? Not to worry – they offer an easier breakdown later on:


Contracts are as follows: Art Asset $1,000,000,000 and this value will be divided by a
number such as (52) weeks. Then the Smart Contract divides the market value of the asset, $1,000,000,000 / 52 weeks = $19,230,769 per week of assets assigned to the META 1 Coin. This amount will be added to the COIN APPRECIATION CONTRACT. Then the COIN APPRECIATION CONTRACT will increase the META 1 Coin value as contracted. The ART VALUE SMOOTH ALLOCATION contract will be using new and chosen art assets and can be assigned to the ART PURCHASED “IN PROCESSING” contract. This will show investors that a new art asset is IN PROCESS and that META 1 will slowly infuse value into the META 1 Coin by running the ART VALUE SMOOTH ALLOCATION contract.

There, see, told you it was simple. In case you were thinking of investing at this point, and why wouldn’t you, there’s another important point to note:


Living breathing Humans can buy META 1 Coin. Corporate Fictions, non-living entities are not allowed to buy META 1 COIN. META 1 COIN is a coin for Humanity and needs to stay in possession of Humanity.

Please therefore make sure you’re a living entity before you buy META 1 tokens – there will be checks performed.

META 1 Has All Bases Covered

So what is it that META 1 wants to do? Put simply, they want to buy, verify and tokenize artworks on the blockchain, as well as having other grand ambitions. A few times in the whitepaper, META 1 casually drops in the fact that they own a $1 billion-dollar art collection which they will be initially tokenizing, although they offer no evidence whatsoever to back up their ownership of this monumental haul. But that’s fine, because it’s blockchain so, you know, trust and all that.

META 1 will be buying up famous works by the masters to tokenize as time passes. Of course, authenticity and provenance of these works is critical, so who will META 1 be engaging to perform this delicate task?


META 1 COIN TRUST purchased a very famous art collection with impeccable provenance, countless expert reviews, and appraisals. Additionally, META 1 Coin has their own Forensics Laboratory confirming all fine art. By having a Forensics Laboratory using the most advanced science defining the actual antiquity of the paint, and the canvas of Fine Art determines 100% an authentic.

Fantastic – that’ll save some money! And what are these “advanced science” techniques? We don’t need to know – move along please. There’s pictures up ahead.

Jack of All Trades

So is META 1 just involved in the art world? Heavens no! As is traditional for forensic art analysts, they also have fingers in the banking pie. They have partnered with a crypto exchange to offer a debit card so you can spend your always-appreciating META coins at the grocery store. The name of the exchange? META.EXCHANGE. Who’d have thought?!

Something for the Blockchain Nerds

In case anyone reading happens to know about blockchain and cryptocurrencies, META 1 handily provides a technical insight into their own blockchain:


To monetize humanity’s finest works as the security for the “new” conveyance of wealth, in the form of the incorruptible “Satoshi-based” blockchains such as Bitcoin and Litecoin, offering a variety of blockchain token(s) coin architecture with greater scalability and security.

Ah yes, those famous “Satoshi-based” blockchains. And why are they the best again?

The whitepaper is littered throughout with so many red flags you’d think you were on a shark infested beach. The executive team, whose “Linked In” profiles are not linked to in the whitepaper and are no longer on the site anyway, are focused on “creating a platform delivering great abundance to META 1 Coin holders”. They will do this by designing a system whose tokens “will increase in value” to the oddly specific figure of $22.22 at some unknown point in the future – a return of almost 225,000%.

This target figure of $22.22 per token is mentioned no less than six times throughout the whitepaper, really drumming home how much money early investors are guaranteed to make.

The whitepaper also has an entire section devoted to why the value of the token will increase, which includes META 1’s belief that they have “perfected cryptocurrency for the market”, the end result of which will be a “highly demanded” coin to which “the market shall respond favorably.”

A final, and huge, red flag is that ICO investors are told that they are “getting in at the starting point”, which is the exact same pitch that OneCoin founder Dr Ruja Ignatova gave to entice early investors into her scam. Now there’s a project you want to emulate.

Overall, the META 1 whitepaper is a combination of massive unprovable claims, illegal promises, and technical bluffing written in terrible English and with an appalling design aesthetic.

Rarely has a whitepaper failed on so many fronts and still managed to secure millions of dollars in funding. It just goes to show that, three years after the ICO scam boom, there are still people out there so desperate for some quick cash that they will fall for a promise and some fancy words, all contained within, undoubtedly, the world’s worst whitepaper.

OUT OF MIND » SUPER SCAMMERS!! RV & DINARIAN FRAUDS & THOSE THAT BUST THEM OUT! » DAVE SCHMIDT - COSMIC CONNECTION CONMAN » Dave Schmidt (Meta 1 Coin) The Worst Whitepaper In The World Award! Written By A 10 Year old?