SpaceX just one week away from launching 1st astronauts on Crew Dragon for NASA Thu May 21, 2020 8:57 am

SpaceX just one week away from launching 1st astronauts on Crew Dragon for NASA
By Mike Wall a day ago
The next seven days will be action-packed.


SpaceX's first crewed flight is just a week away.
Elon Musk's company is scheduled to launch Demo-2 next Wednesday (May 27), a mission that will send NASA astronauts Bob Behnken and Doug Hurley to the International Space Station (ISS) aboard a Crew Dragon capsule.

The liftoff, atop a SpaceX Falcon 9 rocket that will depart from NASA's Kennedy Space Center in Florida, will mark the return of orbital human spaceflight to American soil after a nearly decade-long absence. The last such launch, in July 2011, kicked off the final mission of NASA's space shuttle program.
Related: SpaceX's historic Demo-2 mission explained in 13 steps 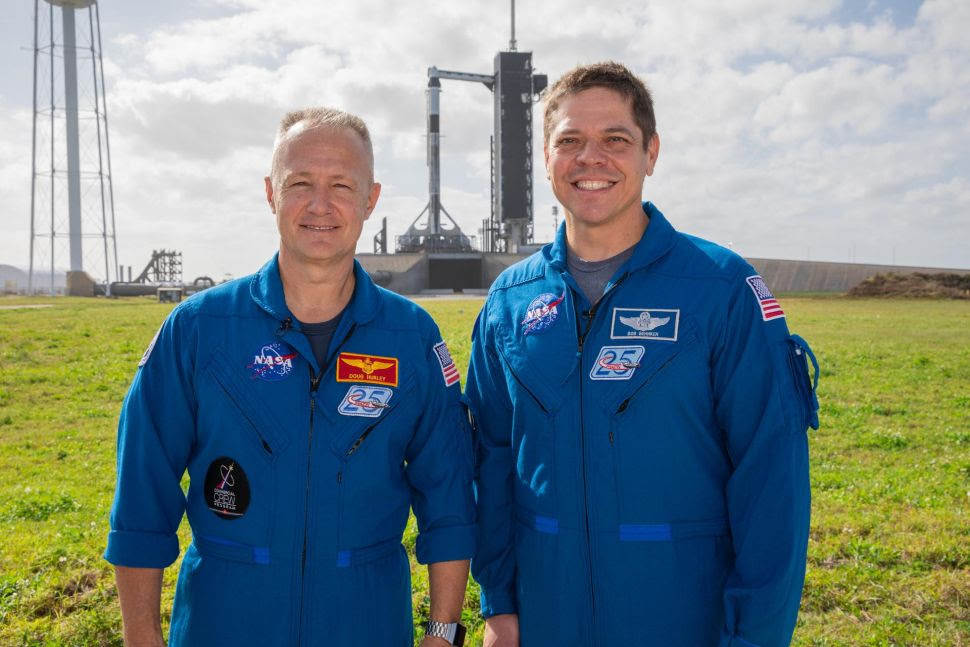 (Image credit: NASA/Kim Shiflett)
"It's just been an incredible journey to get us this far, and in some ways it's really hard to believe we're gonna launch next week, but it's incredibly exciting," Hurley said yesterday (May 19) during a meeting of the National Space Council, a policy-steering body chaired by U.S. Vice President Mike Pence.
"It's a real honor to just be a part of this program and to launch American rockets from Florida one more time," Hurley said.
Demo-2 will last between one and four months; NASA and SpaceX will decide on the duration after Crew Dragon is aloft. The mission is designed to fully validate Crew Dragon and Falcon 9 for crewed flight, freeing SpaceX to start flying operational missions to the ISS with the duo. The company holds a $2.6 billion deal with NASA's Commercial Crew Program to conduct six such flights. (SpaceX also holds a separate NASA contract to fly robotic resupply missions with the cargo version of Dragon, which first visited the ISS in 2012.)

The next week will be action-packed as NASA and SpaceX gear up for the landmark launch. For example, Hurley and Behnken are scheduled to arrive at KSC today (May 20) from their home base, NASA's Johnson Space Center in Houston. And the critical flight readiness review for Demo-2 will occur tomorrow (May 21).
These activities will take place with a new man in charge of NASA's human spaceflight program. Yesterday, the agency announced that Doug Loverro had resigned as Associate Administrator for NASA's Human Exploration and Operations Mission Directorate. Loverro's former deputy, former NASA astronaut Ken Bowersox, has taken on the job in an acting capacity.

The shakeup shouldn't adversely affect Demo-2, NASA officials said.
"Next week will mark the beginning of a new era in human spaceflight with the launch of NASA astronauts Bob Behnken and Doug Hurley to the International Space Station," agency officials wrote in a statement yesterday about Loverro's departure. "We have full confidence in the work Kathy Lueders and her entire Commercial Crew team have done to bring us here. This test flight will be a historic and momentous occasion that will see the return of human spaceflight to our country, and the incredible dedication by the men and women of NASA is what has made this mission possible."
As its name suggests, Demo-2 will be the second Crew Dragon mission to the ISS. The first was Demo-1, an uncrewed eight-day mission that took place in March 2019.
Boeing also holds a NASA commercial crew deal, which the company will fulfill using a capsule called CST-100 Starliner. But Starliner isn't ready to fly astronauts yet. The spacecraft encountered problems on its version of Demo-1 this past December and failed to meet up with the ISS as planned. Boeing will refly that uncrewed test mission before putting astronauts aboard Starliner.