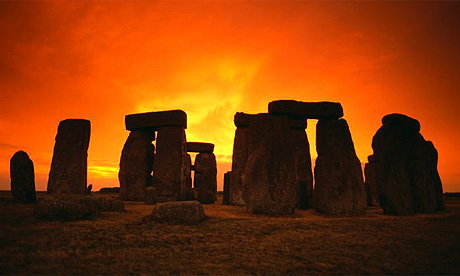 On November 27, 2007, I joined the US History Channel team, who visited Stonehenge, Wiltshire, UK, to be filmed conducting certain experiments for a television documentary that they were making concerning the connection between Ley Lines, Earth Energies and UFOs. For reference, I took along with me some extremely rare VHS footage that was originally shot at Stonehenge in 1990 by record producer David Tickle. Early in 2008, the finished documentary called 'UFO Vortexes' (part of The UFO Hunters series), was screened. The David Tickle video clip featured on this programme appears to show the manifestation of an aerial lightform, whilst also revealing at the same time, a variety of objects which are seen emerging out of a nearby ancient burial mound, as if in harmony with the UFO appearance. Although the footage is quite grainy by modern-day standards, (at that time 22 years old, and transferred from VHS to digital), it is my belief that the artifacts seen popping up from the mound are not flaws or other problems with the analog videotape, (as skeptics have argued), but are what I believe to be the first visual evidence of Ley Energy to have been captured on film. It is said that the sprawling monument of Stonehenge and its surrounding sacred sites are all positioned on crisscrossing Ley Lines, (also called Geo energy lines) ...channels of a subtle magnetic force: If true, little wonder then why this location seems to attract mysterious happenings from time-to-time. Are these sites in fact home to naturally occurring portals, whose 'window areas', open up under certain conditions, thus allowing strange phenomena to become manifest? Through my private researches, I have also noticed that wherever these 'places of power' exist, important military establishments are also to be found within a few miles or so. Is there a connection, or is it just a remarkable concurrence of circumstances? Please decide for yourselves. Kenneth John Parsons (BEAMS)