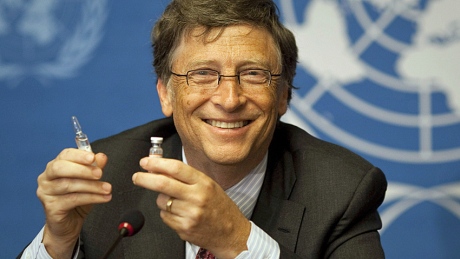 Source: True Pundit
The Bill and Melinda Gates Foundation helped negotiate who would score a $100 million government-backed contact tracing contract in August 2019 — six months before the ‘pandemic’ arrived in the United States and four months before it swept through China. (Listen Above)
The shocking revelations were unveiled on the Thomas Paine Podcast and the Moore Paine Show on Patreon by the two investigators who blew the whistle on the massive Clinton Foundation tax fraud during a Congressional hearing in 2018. John Moynihan and Larry Doyle testified in Congress, detailing the fraud and schemes utilized by the Clinton’s to avoid paying up to $2.5 BILLION in federal taxes.
The investigative duo, in their first interview since that bombshell Congressional testimony, revealed to Paine that representatives from the Gates Foundation met with U.S. Congressman Bobby L. Rush at a sit down in Rwanda, East Africa in mid August 2019 to hash out who would score the windfall from a government contact tracing program. And just last month — nine months after the meetings with the Gates Foundation in Rwanda —  Rush, a Democrat from Illinois, introduced the $100 BILLION H.R. 6666, the COVID-19 Testing, Reaching and Contacting Everyone (TRACE) Act.
Rush’s bill would establish a program run by the Centers for Disease Control and Prevention (CDC) for national coronavirus testing and contact tracing.
Paine has since learned Congressman Rush traveled to Rwanda with his spouse from August 12th to 19th, 2019 to take part in talks and a week-long event underwritten by the Bill and Melinda Gates Foundation and the Rockefeller Brothers Fund.
But how can you negotiate the byproducts of monitoring a pandemic six to seven months before the outbreak of the virus even happens?

» Michigan Businesses Face 6 Months in Jail if They Don’t Track ALL Customers for Contact Tracing
» Bill Gates Offers Nigerian House of Reps $10 Million Bribe for Speedy Passage of Compulsory Coronavirus Vaccine Bill
» Bill Gates Caught Red Handed In Pandemic Lie?
» Bill Gates Says We Should Prepare For The Next Pandemic: “That Will Get Attention This Time”
» Body Language: Bill Gates On Coronavirus