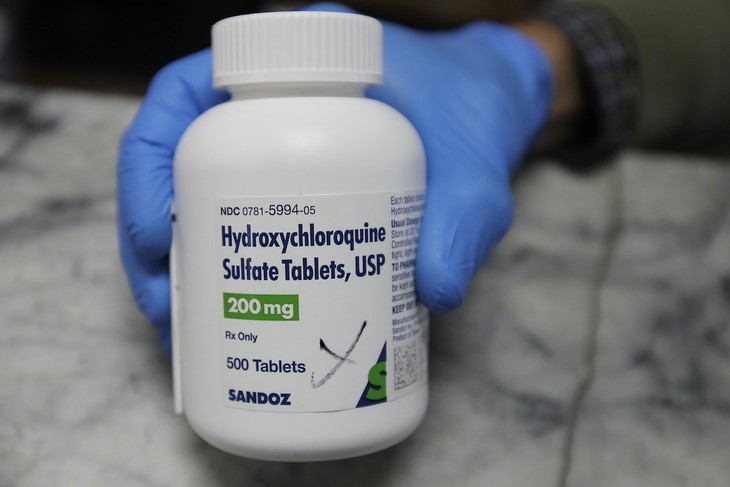 AP Photo/Ben Margot
A new large-scale study conducted by the Henry Ford Health System concluded that hydroxychloroquine, the anti-malaria drug touted by Trump as a potentially game-changing treatment for the coronavirus, successfully lowered mortality rates for hospitalized coronavirus patients. The results were published Thursday in the peer-reviewed International Journal of Infectious Diseases.


Just The News reported on its findings:

The study also determined that there were no adverse effects on the heart, despite previous reports.

Will the mainstream media give this study the attention it deserves? I bet they won’t.

Hydroxychloroquine had several success stories ignored by the mainstream media

In May, a survey of doctors found that an overwhelming majority “would prescribe hydroxychloroquine or another anti-malaria drug to a family member” suffering from the coronavirus. The media didn’t care.

Success stories from coronavirus patients who recovered after being treated with the drug have also been widely ignored. In April, a Democrat lawmaker in Michigan credited the drug and President Trump with saving her life. State Rep. Karen Whitsett, a Detroit Democrat, tested positive for the coronavirus in March, and had been aware of  “the wonders” of hydroxychloroquine after a previous Lyme disease affliction, but would never have thought to ask for a prescription for it to treat the coronavirus had Trump not been touting it as a possible treatment for COVID-19. Whitsett took the drug in combination with antibiotics and made a full recovery.

“It has a lot to do with the president … bringing it up,” Whitsett said. “He is the only person who has the power to make it a priority.”

Other coronavirus patients have reported dramatic recoveries after taking the drug.

In April, the results of a U.S. Veterans Health Administration study on the benefits of hydroxychloroquine as a treatment for the coronavirus were released. The study analyzed the impact of hydroxychloroquine with and without the antibiotic azithromycin and compared that to patients receiving standard care. The VA study found there were “more deaths” among those given hydroxychloroquine than those who just received standard care. However, the VA study wasn’t a clinical trial, but a small, non-peer-reviewed study of patients that were not representative of the entire population, and more severe cases were disproportionally administered the drug.

In May, multiple studies claimed that the antimalarial drug hydroxychloroquine was linked to higher rates of mortality with coronavirus patients. In response to this study, the World Health Organization and many national governments changed their policies and treatment guidelines, effectively halting trials of the drug, and shelving it as a coronavirus treatment. But it turned out that those studies were based on possibly bogus data from a small America-based company called Surgisphere.

The revelation of the faulty data resulted in top medical journals retracting the studies linking hydroxychloroquine to higher mortality.

Early on, there was enough positive anecdotal evidence about hydroxychloroquine to make it clear that the media’s attempt to portray it as poison is purely political. Despite the slew of positive results of the drug, a Democratic state lawmaker in Ohio moaned that Trump should be tried for “crimes against humanity” for touting the drug’s potential.

The war on chloroquine and hydroxychloroquine began almost immediately after Trump touted it as a potential gamechanger in the fight against the disease. Trump was accused of “practicing medicine without a license” simply for pointing out that the drug showed promise in some small studies. The New York Times even alleged that Trump’s motivation for touting the drug was self-serving because he holds “a small personal financial interest” in Sanofi, even though the drug is out of patent (any pharmaceutical company can manufacture it) and he only owned $29 – $435 in stock as part of a mutual fund.

The media was so focused on how they could use the pandemic to undermine Trump’s chances of reelection that they rushed to downplay any sign of hope, which, perhaps prevented the drug from being used to saved lives. Anti-hydroxychloroquine hysteria by the media made finding volunteers for studies difficult.