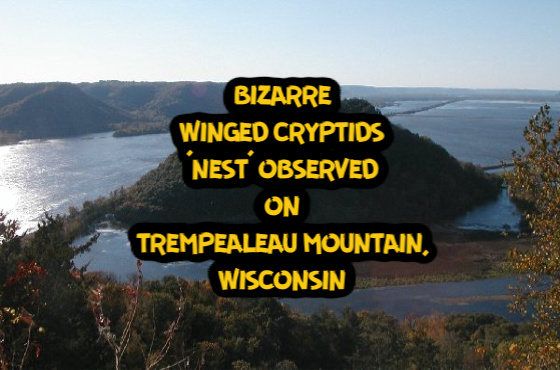 The witness describes a fanciful and curious account of encountering a nest / family of huge moth-like beings on Trempealeau Mountain, Wisconsin. Is it factual? I have no idea.

I referred to an interesting account by the witness 'RB' Is it real? I'll leave it up to you:

"First I must explain that the whole terrifying experience had been suppressed from my memory for over 30 years. I just plain did not remember any of it. I truly believe that my mind could not accept what I had actually seen. My memory was awakened by a television program called “Monster Quest.” The program was about Mothman sightings in the United States. It took several months before all the awful events of that night in June 1975 had filtered through my memory. The following is a full and true account of the experience as I remember it.

I had been out walking along the railroad tracks that ran along the Mississippi River near Trempealeau Mountain, Wisconsin. My car was parked nearby, and I was returning to it. It was dusk and the sun had already set over the Minnesota bluffs across the river. The air was hot and sultry and I could still see pretty well yet. As I walked along, I heard a loud flap, flap, flap coming from somewhere up on the mountain. It was a very unusual sound, and since I had nothing better to do, I decided to investigate. Climbing up the mountain became very difficult after it became dark, and it took me over an hour before I arrived at the top. At last I came to a small clearing in the trees and brush. By this time the full moon had risen, and I could see very well.

I saw a large nest in the middle of the clearing with what looked like four or five moth-like baby birds in it. But the most amazing thing was the very large moth-like creature who was flapping his wings. The sound of his flapping had covered my approach, and he did not see me hidden in the bushes nearby. I think it was flapping his wings to keep the babies cool since the night air was quite warm.

Right in front of me, and between the nest and me, was a large pile of what appeared to be chicken bones, feathers, and dog and cat bones. The pile stunk bad, and combined with all the feces around the nest, it made it REAL bad.

I watched the scene for about a half-hour, and was getting ready to leave, when I heard a scream from somewhere high in the sky. The scream became much louder and seemed to be coming closer. All of a sudden I heard crashing in the trees, breaking branches, and a loud THUD. Then everything became completely quiet.

The Mothman had stopped his flapping, was listening, and appeared very nervous and scared. Since it was so quiet, I was afraid to move, so I remained well-hidden. After an hour or so, I heard sounds of a heavy body crashing through the brush. There were broken branches and heavy footsteps. The thrashing sounds came from about where the thud was heard, and was heading toward the nest. The Mothman on the nest became even more nervous and quickly flew away.

Then a very large and scary-looking Mothman female crashed into the clearing. She was dragging a dead human body by one leg. Then she threw the body onto the chicken bone pile, and headed for the babies in the nest. The Mothman babies made clicking sounds and acted glad to see her. This Mothman female was a very scary sight. She must have weighed 300 to 400 pounds, with large claws and muscles. Her wings were kind of torn from the crash, but otherwise she seemed okay. I was very scared, and didn’t know what to do, since I couldn’t leave because she would hear me and might kill me.

After some time playing with the babies, she laid down on the ground and went to sleep. I could hear the loud snoring sounds that she made. I was just getting ready to leave again when the body on top of the bone pile started to groan and stir. He wasn’t dead, but appeared to have been knocked out. I think she thought he was dead, and was going to eat him after he had ripened up.

The appearance of this person was very odd. He was wearing a t-shirt, an afro wig, fishnet pantyhose, and high-heeled boots. His lips appeared to have been plumped with silicone. On the front of his t-shirt was printed “GAY PRIDE” and “SAN FRANCISCO.” On the back it said “JUAN’S COMFORT LOUNGE AND ESCORT SERVICE.” He got up and wobbled around in circles for a while, and then staggered away down the hill. After he left, and since the female Mothman was still snoring away, I figured now was the time to get away.

I then crawled back down the mountain to the railroad tracks. I was heading back to my car in the parking lot, when I saw the dad Mothman perched up on a 30 foot high railroad signal tower. Just then he released a large bowel movement which fell onto the tracks. The whole performance was accompanied by loud gas explosions and grunts. The smell was pretty bad.

Then he flew away across the river, and climbed up in the sky toward the moon. This is the last time that I saw him.

Then I ran down the tracks to my car, locked all the doors, and drove away fast." RB

NOTE: I'm posting this account 'as is.' Do I believe it? Hmm...not sure. I believe some of the story became lost in translation and over time. Lon

The launch of our newest project has begun! 'Beyond Explanation' is a collection of first-person encounters, directly from the pages of Phantoms & Monsters. Please subscribe & feel free to distribute to your friends and other paranormal enthusiasts. The Facebook page can be found at Beyond Explanation on Facebook - Thanks for your help. I hope you enjoy! Your comments are welcomed. Lon