The "Sleeping Man" of the Kaikoura UFO Mystery resembles a Humanoid

The "Sleeping Man" of the Kaikoura UFO Mystery resembles a Humanoid

On the 31st of December 1978 a film team went on board of an Argossy airplane for an interview with the crew. On the 20th and 21st of December another aircraft had reported UFOs and this was the reason for the interview by Mr. Fogarty and his crew.

Image: Sleeping Man / Humanoid Kaikoura.
The pilot and co-pilot were not the ones that had reported the event. Only ten minutes into the flight their was a first UFO encounter.

The cameraman quickly changed the lens of his camera to a 100 mm / 240 mm zoom lens and after midnight on the 1st of January 1979 he filmed the UFOs that during the entire flight followed and approached the plane.

He recorded the UFOs from the windows of the cockpit and the presence of these unidentified flying objects were also confirmed by Wellington Radar and Air traffic Control.

This event is commonly known as the Kaikoura UFO Mystery.

The original 16 mm film was hidden from the public for 37 years. People forgot that it existed and the Kaikoura UFO encounter became a UFO cold case.

But while the Argossy airplane flew back from Christchurch (NZ) to Blenheim (NZ), David Crocket pointed his 16 mm camera towards a small township too.

No one ever paid attention to this section of the film but Deuem, inventor of DEUEM processing analyzed the frames and he found another one small UFO hovering overhead or near the township.

The 16 mm had been digitized by a top notch film laboratory and ‘The Image Analysis Team’ which is a group of experienced researchers and forensic video/image specialists, received 4 High Definition videos of Blue-Ray quality. 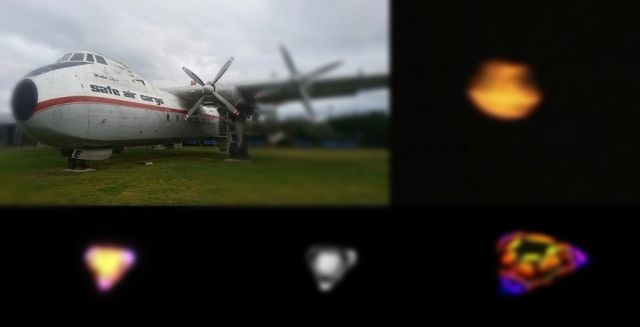 See video analysis: The Triangle UFO Mystery of Kaikoura, New Zealand
Now, convention software fails to reveal the "secret" that is hidden within the white glowing areas of the small UFO that flew overhead or near the township. A combination of software is required, some are available to the public and some like proprietary DEUEM and SMD are not.

To analyze the UFO over the township the team used at first SMD1 which is a complex proprietary technology (DEUEM upgrade) used to visualize the effects of gravity (not gravity itself) and to reveal the glowing of excited gasmolecules (plasma) in a gaseous environment / atmosphere. (DEUEM = Detection of electromagnetic plasma dynamics)

After SMD1 they apply SMD2: This software identifies the tiniest differences in color and intensity in an image and it transforms all colors to different colors which are randomly selected from the color wheel. (full color spectrum).

After the final processed image which no longer shows any of the original colors but it presents us with a hundred times more details which previously could not be seen, the team believes that the small glowing UFO which they have called the "Sleeping Man, overhead or near the township, resembles a humanoid. 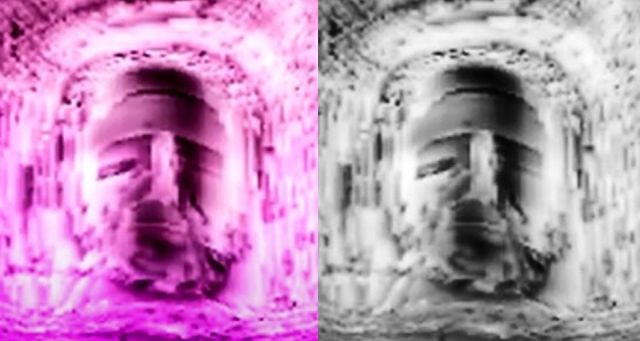 Some people claim that what the group of forensic video/image specialists see is not real and a case of pareidolia but after you watched the video if that really is the case here!