BEIRUT – Yesterday, an immense explosion ripped through Lebanon’s capital of Beirut, emanating from the city’s busy port situated right next to the city centre.
According to an official of the Lebanese Prime Minister Hassan Diab, the Beirut explosions were caused by an estimated 2,750 tons of Ammonium Nitrate which was apparently left unsecured for 6 years in a warehouse.
The government vows to punish any officials shown to be negligent in this unprecedented incident which has now claimed the lives of at least 100 residents and injured a further 4,000.
Death tolls could rise sharply once rescue crews are able to search the port area which has been completely leveled as a result of the blast waves.
Windows and doors across the city were blown-in, and blast tremors could be felt as far away as Cyprus.

(Image Source: Twitter)
The area’s hospitals are reportedly overwhelmed as a result of the blast, and medical supplies are in short supply because of stock which was stored at warehouses close to the devastated port area.

Red Cross is said to be coordinating with the ministry for health to allow for morgues to take victims due to the fact that hospitals are overwhelmed.
Blast damage is reported to have extended over half of the city.
“It’s a catastrophe inside. There are corpses on the ground. Ambulances are still lifting the dead,” said one Lebanese soldier to AFP.
“It was like an atomic bomb,” remarked another resident who lived near the port.
The PM has announced three days of national mourning, and two week “state of emergency” has been declared for Beirut.
City Governor Marwan Abboud says that 10 members of the Fire Brigade are dead. Officials have given the Higher Defense Council 5 days to conduct the investigation.
Initial reports had suggested that the explosion was due to a ‘fireworks depot’ which had caught fire, but subsequent reporting has identified Ammonium Nitrate is the primary accelerent for the blast.
Call for Evacuation
Lebanon’s health minister has issued an advisory notice for residents to leave the city if they can, due to the possible toxic poisoning and hazardous materials present in the air from the explosion. Officials are warning that these may have long-term deadly effects on the peoples health.
The chemical material in question, an organophosphate known as Ammonium Nitrate, is a common industrial chemical used for for fertiliser, and is also used as an ingredient for explosives, although it is not explosive on its own. On its own, it can only ignite under very specific conditions.
The compound was a catalyst for the Texas fertiliser plant explosion in 2013, and a chemical plant blast in Toulouse, France in 2001, and was also a component in the bomb used in the suspicious 1995 Oklahoma City Bombing.
UK Telegraph reports…
It is not explosive on its own, but as an oxidiser it can suck oxygen into a fire.
However, Gabriel da Silva, a senior lecturer in chemical engineering at the University of Melbourne, said it ignites only under the right circumstances.
“You need extreme circumstances to set off an explosion,” he told The Guardian.
Ammonium nitrate can actually smother a fire, but if the chemical itself is tainted or contaminated, for example with oil, it becomes explosive. “I think that’s what’s happened here,” said da Silva.
The chemical in the air should disappear quickly but pollutants can have long-term effects, he said.
————————
Numerous key buildings and venues have been wrecked, including the Forum de Beyrouth exhibition hall, as well as offices, shops, bars and restaurants located in nearby Gemmayzeh and Riad el Solh districts. 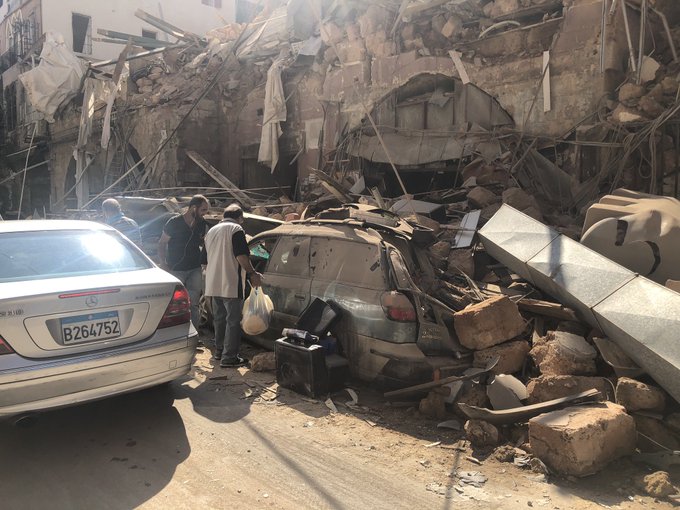 » Explosions Rock Canada's Largest Oil Refinery As Company Confirms 'Major Incident'
» RT: ‘Don’t insult our Prophet!’ Over 100,000 march in Beirut protest
» Explosions rock Michigan neighborhood as US Army urban military training exercise begins
» Huge Explosions that light up the sky form Siberian craters seen by locals
» This Huge Rock Defies All Logic, No One Knows How It Ended Up In The Mojave Desert