OUT OF MIND » THE INSANITY OF REALITY » GOVERNMENTS & THE NEW WORLD ORDER » Four Explosions Within 24 Hours: Here's What Happened in Lebanon, China, North Korea, and UK

The world was rocked by the news of the Beirut explosion this Tuesday, August 4--but it turns out that the Lebanon capital was not the only one shaken by massive explosions as a chemical factory in Wuhan, China, and a house in Hyesan, North Korea, also exploded on the same day. 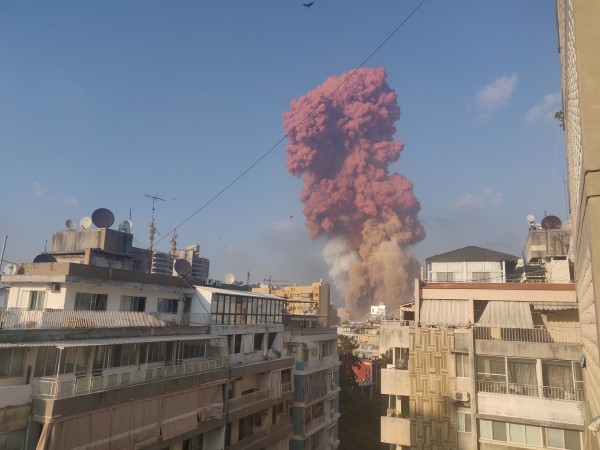 (Photo : TALAL TRABOULSI/REUTERS)
Black smoke could be seen at the scene before the massive explosion.
Besides these three explosions, a white van also exploded on a residential London street in Feltham recently, with the explosion caught on camera showing black smoke from the van.
According to reports, the gas cylinders behind the van ignited.

Fortunately, no one was killed during the explosion with the driver escaping from the vehicle with only minor injuries.

The Massive Explosion in Beirut

According to BBC, the explosion happened after 6:00 p.m. (15:00 GMT) this Tuesday after a fire at the port area of the capital Beirut.
Eyewitnesses were able to capture a video of the massive fire and uploaded them on social media but did not expect the explosion that happened after that was also caught on camera, showing the mushroom cloud that spread throughout the port area.
The massive blast is believed to have killed at least 100 people, with rescuers still searching for more than a hundred people in the rubbles of the port area.
Moreover, 4,000 people were wounded, according to a CNN report.
Lebanon President Michael Aoun announced that the explosion was caused by 2,750 tonnes of ammonium that was stored unsafely in one of the warehouses in the area.
After the explosion, the US Embassy in Beirut urged the public living near ground zero and the affected areas to wear face masks due to the toxic gases released during the explosion.
The country is in a state of mourning after the tragic incident.

Meanwhile, in China, a chemical factory in the city of Wuhan has also exploded around 5:30 p.m. local time.
According to a Daily Mail report, the factory in question is the Lanhua Silicone Company located in the town of Xiliuhe in Xiantao with the explosion originating in a workshop within the factory that stores butanone oxime, a silicone-curing agent.
The explosion was also caught on camera and was released by state broadcaster CCTV, showing people gathering outside of the factory where black smoke was rising.
The city officials sent 14 fire engines to control the fire along with more than a hundred rescuers, including paramedics, firefighters, and environmental officials tasked to find and secure any survivors.
Unfortunately, six people have died, four were wounded, and five people remain missing.

North Korea has also experienced an explosion that led to nine people dead and 30 more wounded after several explosions that happened at a house in Hyesan, Yanggang Province.
Unfortunately, six of the wounded people who were rushed to the hospital after the explosion has succumbed to the injuries they acquired.
According to Daily NK, the explosion was caused by an apparent gas leak.
A source of the news outlet in the area said that the gasoline that was stored in the house had somehow ignited around 6:10 p.m. local time, leading to the explosion of a liquid petroleum gas (LPG) cylinder.
According to the source, other LPG cylinders attached to the house also caught fire and exploded around 10 times.

OUT OF MIND » THE INSANITY OF REALITY » GOVERNMENTS & THE NEW WORLD ORDER » Four Explosions Within 24 Hours: Here's What Happened in Lebanon, China, North Korea, and UK

» BREAKING:North Korea invaded! (by China)
» China hit by more explosions
» What is Going on With North Korea is Not What it Seems
» BREAKING: Tianjin China Rocked by MORE Explosions!
» My take on North Korea - Endless war is profitable