NASA’s Curiosity rover has seen a lot since August 5, 2012, when it first set its wheels inside the huge basin of Gale Crater. 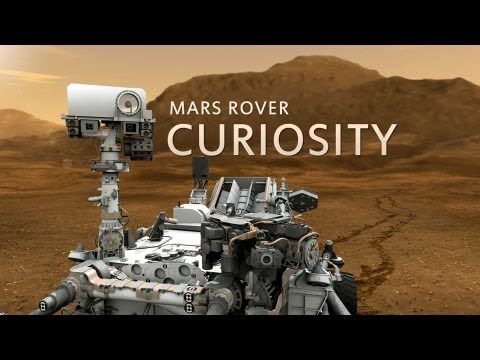 Curiosity rover took this selfie on October 11, 2019. The rover drilled twice in this location, nicknamed Glen Etive. Just left of the rover are the two drill holes, called Glen Etive 1 (right) and Glen Etive 2 (left). Image credit: NASA / JPL-Caltech / MSSS.
Curiosity, the fourth rover the United States has sent to Mars, launched November 26, 2011 and landed on the Red Planet at 10:32 p.m. PDT on August 5, 2012 (1:32 a.m. EDT on August 6, 2012).
The mission is led by NASA’s Jet Propulsion Laboratory, and involves almost 500 scientists from the United States and other countries around the world.

Curiosity explores the 154-km- (96-mile) wide Gale Crater and acquires rock, soil, and air samples for onboard analysis.
The car-size rover is about as tall as a basketball player and uses a 2.1-m- (7-foot) long arm to place tools close to rocks selected for study.
Its large size allows it to carry an advanced kit of science instruments, including 17 cameras, a laser to vaporize and study small pinpoint spots of rocks at a distance, and a drill to collect powdered rock samples: 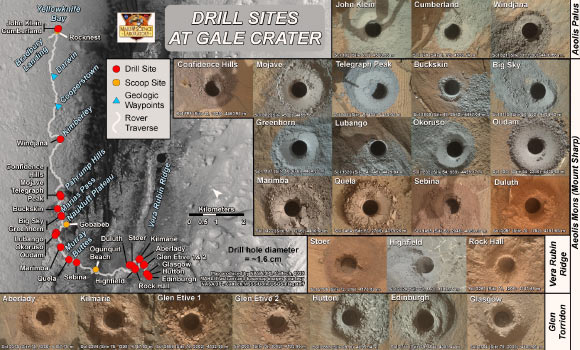 (i) the Mars Hand Lens Imager (MAHLI) is the rover’s version of the magnifying hand lens that geologists usually carry with them into the field; MAHLI’s close-up images reveal the minerals and textures in rock surfaces;
(ii) the Mars Descent Imager (MARDI) shot a color video of the terrain below as the rover descended to its landing site; the video helped mission planners select the best path for Curiosity when the rover started exploring Gale Crater;

(iii) when the Alpha Particle X-Ray Spectrometer (APXS) is placed right next to a rock or soil surface, it uses two kinds of radiation to measure the amounts and types of chemical elements that are present.
(iv) the Chemistry and Camera (ChemCam) instrument’s laser, camera and spectrograph work together to identify the chemical and mineral composition of rocks and soils;
(v) the Chemical and Mineralogy (CheMin) performs chemical analysis of powdered rock samples to identify the types and amounts of different minerals that are present;
(vi) the Sample Analysis at Mars (SAM) is made up of three different instruments that search for and measure organic chemicals and light elements that are important ingredients potentially associated with life;
(vii) the Radiation Assessment Detector (RAD) is helping prepare for future human exploration of Mars; the instrument measures the type and amount of harmful radiation that reaches the Martian surface from the Sun and space sources;
(viii) the Dynamic Albedo of Neutrons (DAN) looks for telltale changes in the way neutrons released from Martian soil that indicate liquid or frozen water exists underground;

(ix) the Rover Environmental Monitoring Station (REMS) contains all the weather instruments needed to provide daily and seasonal reports on meteorological conditions around the rover;
(x) the Mars Science Laboratory Entry Descent and Landing Instrument (MEDLI) measured the heating and atmospheric pressure changes that occurred during the descent to help determine the effects on different parts of the spacecraft.
Since touchdown, Curiosity journeyed more than 23 km (14 miles), drilling 26 rock samples and scooping six soil samples.