OUT OF MIND » TRUTH IN CONSPIRACY THEORIES? » #EPSTEINDIDN'TKILLHIMSELF » Jeffrey Epstein’s victims get second chance at justice against sex offender in appeals court

They say federal prosecutors violated their rights when they failed to tell them about the millionaire’s secret plea deal more than a decade ago. 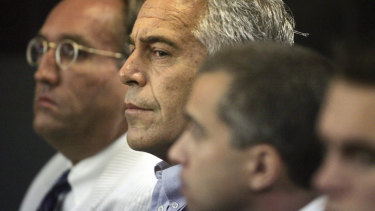 In this July 30, 2008, photo, Jeffrey Epstein, center, appears in court in West Palm Beach. Epstein, 66, committed suicide in 2019 while he was in custody on federal sex-trafficking charges in New York.
By Jay Weaver
Published Earlier today 2020-08-08

The young victims of sex offender Jeffrey Epstein will get a second chance at seeking justice after an entire appellate court agreed Friday to rehear claims that federal prosecutors in South Florida violated their rights when they kept them in the dark about a secret plea deal with the now-deceased Palm Beach multimillionaire.

The 11th U.S. Circuit Court of Appeals vacated a previous panel’s 2-1 decision that rejected a petition by one of Epstein’s victims. She sought to undo the agreement that federal prosecutors struck with Epstein not to charge him with trafficking girls for his own sexual pleasure more than a decade ago.

A majority of the appeals court in Atlanta voted to rehear the appeal, setting the stage for a possible solution for potentially dozens of victims in the ground-breaking Epstein case. Despite its ruling in April, the three-judge panel had called the South Florida prosecutors’ deal with Epstein “beyond scandalous” and a “national disgrace.”

Epstein, 66, committed suicide a year ago while he was in custody on federal sex-trafficking charges in New York.

The three judges narrowly rejected Courtney Wild’s petition to compel federal prosecutors in South Florida to charge Epstein on the grounds that the feds violated Wild’s and other victims’ rights when they cut a secret deal with him behind their backs. Instead, prosecutors allowed Epstein to plead guilty to lenient solicitation charges in state court in Palm Beach County.

“I had confidence this day would come,” Wild said in a statement through her lawyers. “We have fought for 12 years, and as I’ve said before, no matter how many obstacles pile up, we will never give up fighting for what is right.”

Her lawyers vowed to get Epstein’s “secret” plea deal with South Florida prosecutors thrown out.

“This is an important ruling for crime victims, not just for Epstein’s victims but all victims of federal crimes,” Wild’s lawyers, Paul Cassell and Brad Edwards, said. “We look forward to arguing before the full Eleventh Circuit that [the] ‘secret’ plea deal violates the Crime Victims’ Rights Act and that this particular deal should be rescinded.”

Previously, the three-judge appellate panel had ruled that because prosecutors never brought charges against Epstein in the federal court in South Florida, his victims were not legally allowed to seek relief under the Crime Victims’ Rights Act.

“Despite our sympathy for Ms. Wild and others like her, who suffered unspeakable horror at Epstein’s hands, only to be left in the dark — and, so it seems, affirmatively misled — by government lawyers, we find ourselves constrained to deny her petition,” Judge Kevin Newsom wrote in the majority opinion, joined by Judge Gerald Tjoflat.

The panel’s decision was appealed to the full 11th U.S. Circuit Court of Appeals because of a sharply critical dissent by the third panelist, Judge Frank Hull.

“The majority concludes that our court is constrained to leave the victims ‘empty handed,’ and it is up to Congress to ‘amend the [CVRA] to make its intent clear,’ ‘’ Hull wrote. “Not true. The empty result here is only because our court refuses to enforce a federal statute as Congress wrote it. The CVRA is not as impotent as the majority now rewrites it to be.

“Given the undisputed facts that the U.S. Attorney’s Office [in Miami] completed its investigation, drafted a 53-page indictment, and negotiated for days with Epstein’s defense team, the office egregiously violated federal law and the victims’ rights by not conferring one minute with them [or their counsel] before striking the final [non-prosecution agreement] deal granting federal immunity to Epstein and his co-conspirators,” Hull concluded.

Wild’s petition, filed in October, challenged U.S. District Judge Kenneth Marra’s decision that she and others were not eligible for any major relief, even though he found federal prosecutors violated the rights of Epstein’s victims by leaving them in the dark about his non-prosecution agreement with the U.S. Attorney’s Office in Miami.

That office, which was headed at the time of the deal by Alexander Acosta — who later became President Donald Trump’s secretary of labor — has recused itself in the civil case and is represented by the U.S. Attorney’s Office in Atlanta.

Wild and another plaintiff, Jane Doe 2, wanted the judge to restore the originally planned federal sex-trafficking charges against Epstein in South Florida, but Marra refused to go that far for a couple of reasons.

Epstein died in August 2019. He was found hanging in a Manhattan jail cell following his arrest on renewed sex-trafficking charges levied by the U.S. Attorney’s Office in Manhattan. The arrest by federal authorities in New York City, where Epstein also maintained a home, followed an investigative series in the Miami Herald, Perversion of Justice, that dissected the decision not to charge Epstein federally and, for the first time, presented interviews of Epstein’s victims, including Courtney Wild.

Marra said he did not have the authority to order federal prosecutors in South Florida to charge him, even before Epstein’s death.

In his September ruling, Marra left open the possibility that certain requests by the victims could be fulfilled. They wanted to meet with prosecutors and get an explanation for why the U.S. Attorney’s Office in South Florida didn’t seek a sex trafficking indictment against Epstein when he was initially investigated 10 years earlier, and why they kept the status of the case secret from the victims.

OUT OF MIND » TRUTH IN CONSPIRACY THEORIES? » #EPSTEINDIDN'TKILLHIMSELF » Jeffrey Epstein’s victims get second chance at justice against sex offender in appeals court