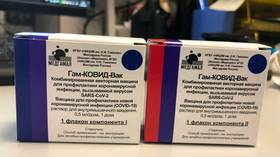 The Russian Health Ministry announced on Saturday that production of the world’s first registered coronavirus vaccine has begun. It’s been named ‘Sputnik V’ after the famed space satellite, launched by Moscow in 1957.
The formula, officially known as ‘Gam-COVID-Vak,’ was developed by the Gamaleya National Research Center in the Russian capital. It has two components that need to be injected three weeks apart to trigger an immune response to Covid-19. The director of Russia’s sovereign wealth fund, which bankrolled the project, Kirill Dmitriev pointed out that Moscow had received applications for more than one billion doses of the vaccine from 20 countries.
Russia’s health regulator registered the vaccine after it passed Phase II trials in June and July. It was decided that completing a Phase III trial was not necessary for the initial roll-out because it is based on an already proven platform. However, it’s important to note that Sputnik V won’t go into general circulation until January 2021, allowing another four to five months in which to further observe its effectiveness.
The decision was criticized by some Western governments and health professionals, who consider it rushed and potentially dangerous. That said, some of them seemed to be under the impression that the vaccine was going into immediate mass circulation. In reality, it will initially only be available to vulnerable workers in important frontline roles. Even then, participation is voluntary, with nobody forced to take part.
Russian Health Minister Mikhail Murashko said, earlier this week, during a meeting with President Vladimir Putin that medical workers and teachers would be the first to get the vaccine. The Health Ministry added that the data from the trials will soon be published and this will hopefully alleviate some of the concerns surrounding it.
President Putin announced the registration of Sputnik V on Tuesday. It was created on a platform that has already been used for the development of a number of other vaccines. According to the Health Ministry, experience shows that such vaccines are capable of developing long-term immunity that lasts for up to two years.
The head of the Gamaleya Center, Alexander Gintsburg, explained that three companies are preparing to produce the formula, adding that it would first be supplied to 10-15 regions of the country, however, he did not specify where exactly.
Gintsburg warned that it may take up to a year for all Russians to get full access to the vaccine. “It is important to understand when we will be able to meet the demand of the country. I hope that it will happen within 9-12 months,” he told Russia’s TASS news agency.
He added that in about a month, around one million vaccine doses would be produced at the three plants mentioned. “By the end of the year, there will be 1.5-2 million doses produced. These are tangible and good numbers,” he said.

» Official ONS Data: Deaths Among Teenagers Have Increased By 47% In The UK Since They Started Getting The Covid-19 Vaccine
» ‘Just getting started: Lawyer foresees flood of comp claims by COVID vaccine-injured clients
» Johnson & Johnson halts production of single-dose COVID-19 vaccine, report says
» Researchers Seek Real-World Data From 2.5 Million People for Global COVID Vaccine Safety Study
» Doctors Around the World Issue Dire WARNING: DO NOT GET THE COVID VACCINE!!