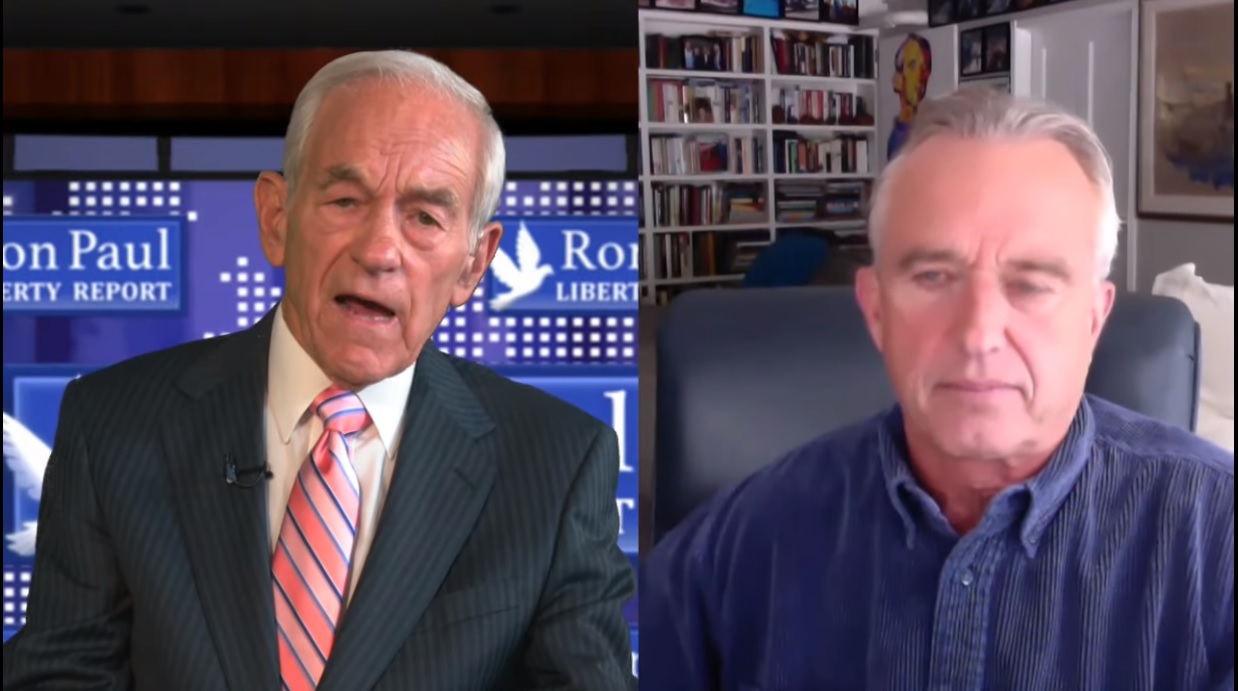 by Brian Shilhavy
Editor, Health Impact News
In what is sure to be a historical interview, former Congressman Dr. Ron Paul interviewed attorney Robert F. Kennedy, Jr. on his daily Liberty Report program today (Friday August 14, 2020).
While Dr. Paul starts the program by stating that the main reason they were inviting Mr. Kennedy on to program was to discuss vaccines, Dr. Paul gets right into an issue that many Americans have questioned for over 5 decades: What was the truth behind the assassinations of President John F. Kennedy in 1963, the uncle of Robert F. Kennedy, Jr., and Robert F. Kennedy, his father, in 1968, and what role did the CIA play in that? 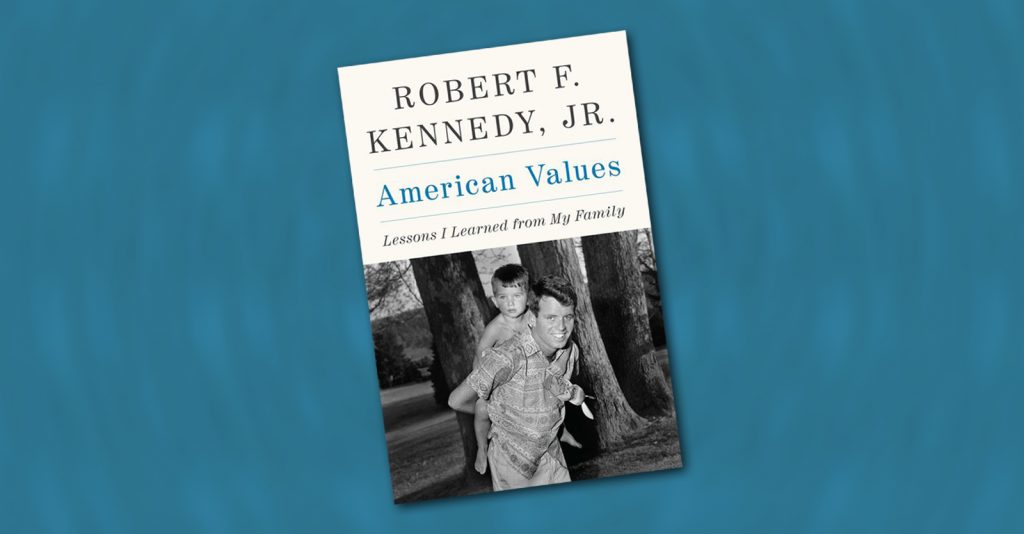 Mr. Kennedy begins by mentioning a book he has written, American Values, which he says documents his family’s almost 75-year battle with the CIA.
He says the fight with the CIA started in the mid 1950s when President Truman asked his grandfather, Joseph Kennedy, to serve on a commission called “The Hoover Commission.”
Their task was to look at the CIA, because the CIA was not originally chartered to engage in paramilitary activities, fixing elections, murdering world leaders, and interfering with the democracies of other countries.
Mr. Kennedy mentioned that the CIA was created with great reluctance by both Democrats and Republicans, because the precursor to the CIA, the “Office of Strategic Services,” a military secret intelligence agency, was liquidated after WWII, because the belief at the time was that secret police organizations were inconsistent with a democracy ruled by a Constitution.
In those days, when Americans thought of secret police, they thought of the “Stasi” (German secret police), or they thought of the “KGB” (Russian secret police), or they thought of the “Gestapo” (Nazi Germany secret police).
So there were debates in Congress when the CIA was being launched, and both Republicans and Democrats did not believe this was something America should be doing.
When the CIA was started, it was supposed to be exclusively an “espionage” program for gathering intelligence. It was not meant to interfere.
But Alan Dulles, the first director of the CIA, apparently had other plans, and soon they were overthrowing democracies in Guatemala, Iran, and all over the world. So when Joseph Kennedy was on the Hoover Commission, he recommended dismantling the CIA.
Mr. Kennedy continues:

Alan Dulles manipulated the law, and did a lot of backroom deals to get these huge secret budgets and began really engaging in all of the mischief. And my grandfather was on a commission that looked at this and saw what they had done.
And when they were overthrowing democracies in Guatemala and Iran and all over the world, he said “we should dismantle it. We should remove the Plans Division,” which was the “dirty tricks” division.
Alan Dulles never forgave him, or my family for that. And when my Uncle came in, and did the Bay of Pigs, he then fired Dulles.
When President Johnson came into the room, in the East Room of the White House, I was standing beside my father when he said to my father that Lee Harvey Oswald had just been killed by Jack Ruby, he told my father and Jackie that, and I said to my father, “Did Jack Ruby love our family?”
And nobody answered that question.

Mr. Kennedy’s father later discovered that Jack Ruby was connected to the Mob and to the CIA. He believed that the CIA killed his brother, President John F. Kennedy.
While Mr. Kennedy states that “you’d be an idiot not to believe that President Kennedy was killed by a conspiracy,” he originally did not believe that about his own father’s murder.
He believed that the evidence against Sirhan was overwhelming, until one day Paul Schrade, one of his father’s best friends and who was standing beside his father when he was shot, and took a bullet to his head, told him that his father was not killed by Sirhan, and that he needed to look at the autopsy report.
Mr. Kennedy states that he was reluctant, because he did not want to get into all of the “conspiracy theories” out there regarding his father’s death.
But he did it as a favor to Paul Schrade because he was such a hero, and after investigating it for a couple of days, it was clear that Sirhan could not have killed his father.
Listen to the rest of the interview below, where they also talk about how Mr. Kennedy reluctantly became an advocate for parents of children who were damaged by vaccines, a career change that has almost destroyed him. Before that, he was a successful attorney suing companies that were polluting the envirnonment.
They also talk about the fact that the shutdowns and social isolation over COVID, led by Anthony Fauci, are killing many more people than COVID.
But before you watch this historical interview, let me tell you what exactly you are watching.
You are watching two men, Dr. Ron Paul, who himself was a career Republican Congressman, and Mr. Kennedy from a famous career Democratic family, who both agree on the issues of medical tyranny facing us today, because they both understand that the threat to America today over the fear of COVID, is a non-partisan issue.
Mr. Kennedy actually quotes the words spoken by Franklin Delano Roosevelt at his inaugural as president in 1933, in the midst of the Great Depression, “We have nothing to fear but fear itself,” because “fear” is the tool of tyrants. Tyrants rule by fear, and by claiming they are the only ones to rescue people from the perceived threat that causes fear.
That is happening today, in an unprecedented way, with COVID fear.
This is not an expensive “polished” interview like you would see on the propaganda corporate media where the interviewers are basically entertainers and appear as models because they are so well-dressed and elegant, but where they are basically acting and following a script to produce a message the Globalists want the public to believe.
Dr. Ron Paul was known as “Dr. No” in Congress because he basically could not be bought by the lobbyists. He was a flight surgeon in the Air Force in the early 1960s, just after the Bay of Pigs incident in Cuba, and is therefore very familiar with the Kennedy family and their political career.
He will turn 85 next week, and sometimes he loses his place in his notes during interviews, but he is still far more intelligent than career politicians of today simply following the crowd because they don’t know how to think for themselves.
Mr. Kennedy has a speech impediment and is obviously not the most eloquent to listen to, but his passion for what he believes and his knowledge of the issues is second to none.
If you want to know the truth and learn the real news, this is far more interesting and informative than anything you will watch on the corporate cable networks, by far.

» Arnie & Anna ~ Yes…they can kill me… They killed Kennedy…They killed Finicum… How many will sacrifice all for you before you act?
» Robert De Niro, Robert F. Kennedy Jr. to announce something BIG tomorrow concerning vaccines and mercury
» Aaron Swartz’s Father Says Reddit Co-Founder Was ‘Killed By The Government’
» Father Launches Billboard Campaign to Tell the World His Son Was Killed by the Pfizer Vaccine
» "This Will Affect Everyone" - Robert Kennedy Jr.