‘Oumuamua, a recently-discovered cigar-shaped object of extrasolar origin, is not made of molecular hydrogen ice after all, according to a new study by astrophysicists from the Harvard & Smithsonian Center for Astrophysics and the Korea Astronomy and Space Science Institute (KASI). 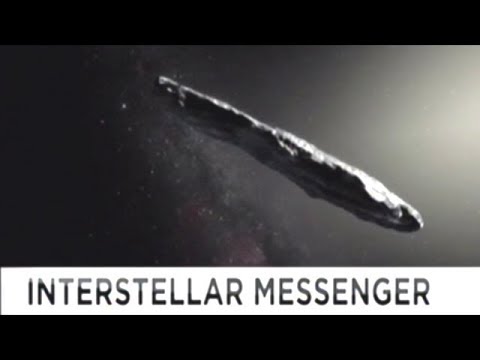 This artist’s impression shows ‘Oumuamua, the first interstellar object discovered in our Solar System. Recent observations show that the object is moving faster than predicted while leaving the Solar System. Astronomers assume that venting material from its surface due to solar heating is responsible for this behavior. This outgassing can be seen in this artist’s impression as a subtle cloud being ejected from the side of the object facing the Sun. Image credit: NASA / ESA / Hubble / ESO / M. Kornmesser.
‘Oumuamua was discovered by the University of Hawaii’s Pan-STARRS 1 telescope in October 2017, more than a month after it passed its closest point to the Sun.
Subsequent detailed observations conducted by multiple space- and ground-based telescopes detected the sunlight reflected off the object’s surface.

Large variations in its brightness suggested that ‘Oumuamua is highly elongated and up to 275 m (900 feet) in its longest dimension.
‘Oumuamua also experienced a small but persistent acceleration that could not be explained simply by the Sun’s gravitational pull.
Theories about its origin include everything from being a planetary fragment to an alien light probe.
Recently, Yale University’s Professor Gregory Laughlin and Dr. Darryl Seligman from the University of Chicago proposed that ‘Oumuamua was made out of molecular hydrogen ice.
Their modeling implied that the interstellar object is approximately 100 million years old, and, assuming a speed of 30 km/s, that it was produced in a giant molecular cloud at a distance of 5,000 parsec (16,308 light-years).
However, their study did not consider the destruction of hydrogen ice in the interstellar medium, but only through evaporation by sunlight.
Dr. Thiem Hoang of KASI and Professor Avi Loeb from the Harvard & Smithsonian Center for Astrophysics were curious whether a hydrogen ice-based object could actually have made the journey from interstellar space to our Solar System.

“We wanted to not only test the assumptions in the theory but also the dark matter proposition,” Professor Loeb said.
“We were suspicious that hydrogen icebergs could not survive the journey — which is likely to take hundreds of millions of years — because they evaporate too quickly, and as to whether they could form in molecular clouds.”
The most likely place to make hydrogen icebergs is in the densest environments of the interstellar medium.
“These environments are both too far away and are not conducive to the development of hydrogen icebergs,” Professor Loeb said.
An accepted astrophysical origin for solid objects is growth by sticky collisions of dust, but in the case of a hydrogen iceberg, this theory could not hold together.
“An accepted route to form a km-sized object is first to form grains of micron-size, then such grains grow by sticky collisions,” Dr. Hoang said.
“However, in regions with high gas density, collisional heating by gas collisions can rapidly sublimate the hydrogen mantle on the grains, preventing them from growing further.”

Although the study explored destruction of hydrogen ice by multiple mechanisms including interstellar radiation, cosmic rays, and interstellar gas, sublimation due to heating by starlight had the most destructive effect.
“Thermal sublimation by collisional heating in giant molecular clouds could destroy molecular hydrogen icebergs of ‘Oumuamua-size before their escape into the interstellar medium,” Professor Loeb said.
“This conclusion precludes the theory that ‘Oumuamua journeyed to our Solar System from a giant molecular cloud, and further precludes the proposition of primordial snowballs as dark matter.”
“Evaporative cooling in these situations does not reduce the role of thermal sublimation by starlight in the destruction of hydrogen ice objects.”
The team’s paper will be published in the Astrophysical Journal Letters.
_____
Thiem Hoang & Abraham Loeb. 2020. Destruction of molecular hydrogen ice and Implications for 1I/2017 U1 (‘Oumuamua). ApJL, in press; arXiv: 2006.08088
This article is based on text provided by the Harvard & Smithsonian Center for Astrophysics.