OUT OF MIND » TRUTH IN CONSPIRACY THEORIES? » #QTARD DRAMA THEATER ARCHIVES » #QTard Drama Theater - Who is Q? Why does it matter? And what is REALLY going on? plus MORE

#QTard Drama Theater - Who is Q? Why does it matter? And what is REALLY going on? plus MORE

Who is Q? Why does it matter? And what is REALLY going on?
Posted on August 20, 2020 by Ann Kreilkamp

Yesterday, for the very first time, a reporter actually asked President Trump about the Qanon phenomenon. And his response was, shall I put it, “cagey”? “I don’t know very much about it. . . .” Yeah, right . .
On the other hand, Praying Medic has a perspective much more balanced than my own:

Then, the same reporter went on to ask about the enormous elephant in the global room:

Reporter: People claim you are secretly saving the world from a cult of pedophiles. Is that something you are behind?

Coincidentally, yesterday Robert David Steele happened to interview Martin Geddes, one of the most knowledgeable and articulate people who has been following the Q phenomenon. Really worth watching, though frankly, I wish Robert had just let Martin have his head and not interrupt. On the other hand Robert did have additional useful iinformation.

j Uncategorized August 19, 2020 2 Minutes
August 19, 2020 Tom Parker
The mainstream media has taken issue with the popularity of the movement and called it a “major problem.”

acebook
has revealed its biggest crackdown on the pro-Trump QAnon movement to
date by removing 790 QAnon Groups, 100 QAnon Pages, and 1,500 QAnon ads
on Facebook and blocking over 300 QAnon hashtags across Facebook and
Instagram.
It has also restricted
1,950 Groups and 440 Pages on Facebook and 10,000 accounts on Instagram
that are associated with QAnon. These restricted properties are “still
subject to removal” as Facebook reviews their content against its
updated rules.
These
updated rules were introduced at the same time that Facebook announced
the QAnon crackdown and are aimed at organizations and movements that
Facebook claims have “demonstrated significant risks to public safety”
but don’t meet the criteria for a complete ban under its “Dangerous
Organizations and Individuals” policy.
The
rules allow people to post content that supports these movements but
ban these organizations and movements from using Facebook ads, commerce
tools, monetization tools, and fundraising tools.
The
rules also restrict these organizations and movements by limiting their
recommendations on Facebook and Instagram, reducing the ranking of
their content in the News Feed, reducing their ranking in search, and
removing their search suggestions.
The announcement follows Facebook employees pushing for a complete QAnon ban last week and other social media sites such as TikTok and Twitter also placing sweeping restrictions on QAnon content recently.
Amid
this increased Big Tech QAnon crackdown, the news media has also been
amping up the pressure to censor the movement after they realized just
how popular it is.
Some of the many news media complaints preceding this Facebook crackdown include Forbes complaining that Facebook “fails to fight QAnon” and lamenting the movement’s “explosive growth,” The Guardian complaining that QAnon “Facebook communities are gaining followers as Twitter cracks down on QAnon content,” Wired directly calling for Facebook to censor the movement, and The New York Times framing the growth of the QAnon movement on social media as a “major problem.” 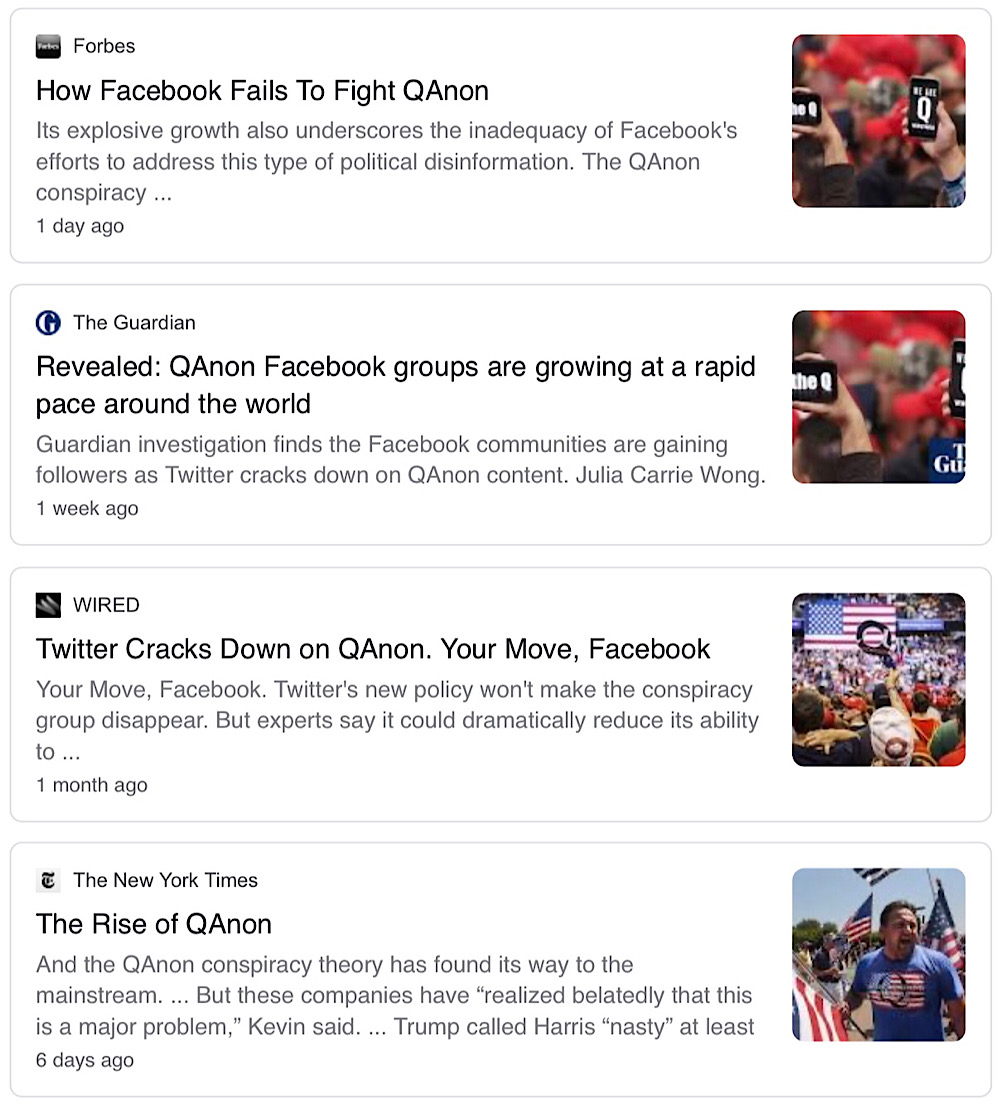 While
the media’s tactic of pressuring Big Tech companies to do censor
certain topics is nothing new, this time journalists seem to have
accepted that the movement is too popular for their calls for censorship to be effective.
via Facebook continues QAnon crackdown after mounting news media pressure

OUT OF MIND » TRUTH IN CONSPIRACY THEORIES? » #QTARD DRAMA THEATER ARCHIVES » #QTard Drama Theater - Who is Q? Why does it matter? And what is REALLY going on? plus MORE