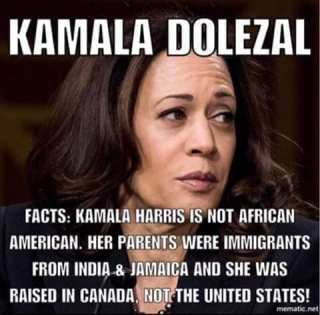 Source: Mark A. Hewitt
If the media were to ask President Trump, “Are you a natural born citizen?,” he would probably respond with, “My father, an American citizen, Fred Trump, was born in New York City, and my mother, Mary Anne, was born in Scotland and became a naturalized American citizen in March 1942.  I was born in Queens in 1946.  Yes, I am a natural born citizen.”
When Kamala Harris was asked the same question, her response was anfractuous and curious: “Look, I’m very clear-eyed about the fact that they are going to engage, as you said, in what they have done throughout this administration, which is just, let’s just be very candid and straightforward, they’re going to engage in lies, they’re going to engage in deception, they’re going to engage in an attempt to distract from the real issues that are impacting the American people.”
In other words, “No.”
If you are constitutionally eligible, what is the harm in laying out a response?  “Mom and dad were both American citizens.”
But Senator Harris would rather engage in actions to circumvent the U.S. Constitution over articulating her ineligibility.
If you listened to the media, you would think there is no definition anywhere of “natural born citizen.”  The media assert that the clause “natural born citizen” isn’t defined anywhere in the U.S. Constitution.  But the media hide the fact that “natural born citizen” was specifically defined in the Naturalization Act of 1790.
Here is the law and the wording.  Congress’s first act concerning citizenship, the Naturalization Act of 1790, provided that “the children of citizens of the United States, that may be born beyond the sea or out of the limits of the United States, shall be considered as natural born citizens” (Act of March 26, 1790. 1 Stat. pages 103, 104 [emphasis added]).
Let’s be clear because this is important: the Naturalization Act of 1790 unambiguously defined that children of citizens of the United States shall be considered natural born citizens irrespective of where they are born.  Children of citizens of the United States may be born beyond the sea, out of the limits of the United States.  It doesn’t matter.  Being a natural born citizen has nothing to do with where you are born but strictly to whom you are born — as long as it’s to American citizens.  This is the media’s and the Democrat Party’s great lie going on twelve years now.  There are many ways to become a U.S. citizen, but if you are to seek the office of the president (or the vice president), you must be a child born of American parents.

Report this ad
And it was so blindingly obvious and repetitive that children of citizens of the United States shall be considered natural born citizens irrespective of where they are born that Congress removed the wording during the replacement Naturalization Act of 1795.  What else can it be?  For over 200 years, no one had any questions about what was meant by natural born citizen until despicable and reprehensible lawyers claimed that the Constitution was wrong or discriminatory in order to disqualify Republican presidential candidates who were born abroad to American parents, such as Barry Goldwater, Lowell Weicker, George Romney, and Christian D. Herter.
And now, when the political foot is well on the other side of the aisle, now any challenge is considered a “distraction.”
What we see is that when there is an obvious case of ineligibility and the media’s chosen candidate is a Democrat, such as Barack Obama (father was a British subject, a Kenyan national, on a student visa and was never a naturalized citizen) or Kamala Harris (mother and father both born abroad; one naturalized citizen at the time of birth), the media freak out, attack, and smear Republicans.  Instead of acknowledging they are not natural born citizens or seeking to resolve the issue in a court of law, they choose to circumvent the U.S. Constitution.
That is what all this media-driven red herring birtherism nonsense has been about — not place of birth on birth certificates, but, two lines down, the nationality of parents who are not American citizens whose children wish to run for the office of the president (or vice president).
How did we get to this place?  In 2020?  This is unadulterated media malfeasance.  They act like three year-olds caught stealing candy.  They could have been adults and reported the law and the facts but chose not to.
Up until the 2008 election, every previous presidential candidate knew the constitutional requirements, but only Barack Obama chose to circumvent the Constitution.  Emboldened by Obama’s successful run at the White House, Senator Harris is making a go.  Good luck, Kamala.  It will not work this time.
The Founders were sensitive to foreign influence in the new government.  The natural born citizen requirement for presidents has always been about erecting a barrier against foreign powers scheming a way into our government.
This is a topic that will not ever go away.  The left rejects the Constitution and will keep throwing ineligible candidates for high office for as long as it takes to have a president who can shred the Constitution.
The Federalist Papers made it clear.  The below is from No. 68, The Mode of Electing the President, from the New York Packet, Friday, March 14, 1788.  (My emphasis.)

Nothing was more to be desired than that every practicable obstacle should be opposed to cabal, intrigue, and corruption.  These most deadly adversaries of republican government might naturally have been expected to make their approaches from more than one quarter, but chiefly from the desire in foreign powers to gain an improper ascendant in our councils.  How could they better gratify this, than by raising a creature of their own to the chief magistracy of the Union?

A reasonable, intelligent person who isn’t committed to deceiving the American people should have little problem recognizing the spirit and intent of the definition of “natural born citizen.”  Liberal lawyers writing in law reviews and their friends in the media have always attacked the Constitution as faulty, and they cite the law and references that support their twisted view of a fairly straightforward topic.
The U.S. Constitution, the Naturalization Act of 1790, and the Records of the Federal Convention of 1787 cite multiple instances of “natural born citizen” and make clear the Framers’ connotation and intent: that children of citizens of the United States shall be considered natural born citizens irrespective of where they are born.
It is a lie of the left that the natural born citizen clause is ambiguous.
Even if they do any research, the left will fail to cite the letter predating the appearance of the phrase in the Committee of Eleven report, when John Jay wrote to George Washington (The Records of the Federal Convention of 1787, page 61):

Permit me to hint, whether it would not be wise … to provide a strong check to the admission of Foreigners into the administration of our national Government, and to declare expressly that the command in chief of the american (sic) army shall not be given to, nor devolve on, any but a natural born citizen.

The Jay letter is consistent with Hamilton in Federalist 68; some have assumed the Jay letter to be the source of the phrase in Article II of the U.S. Constitution.  The only firm conclusions that may be drawn from Hamilton and Jay is that it was in the interest of the new government to keep foreigners away from the presidency and that the president and commander in chief should be a natural born citizen.
I do not see any ambiguity; the president must not be born of a parent of a foreign power and need not be native born, but must be born of American citizens.  To be a natural born citizen, it doesn’t matter where you are born as long as your parents are American citizens.