OUT OF MIND » THE INSANITY OF REALITY » WIKILEAKS & JULIAN ASSANGE » Julian Assange receives first visitors in six months: “He is in a lot of pain”

Julian Assange receives first visitors in six months: “He is in a lot of pain”

Julian Assange receives first visitors in six months: “He is in a lot of pain”

Julian Assange received his first visitors in six months, less than a fortnight out from British court hearings for the extradition of the persecuted WikiLeaks publisher to the US, where he faces life imprisonment for exposing American war crimes.
Stella Morris, Assange’s partner and an internationally-respected human rights attorney, was allowed to meet with the WikiLeaks founder earlier this week, after authorities at London’s Belmarsh Prison eased restrictions introduced in response to the coronavirus pandemic. It was the first time that Morris and their two young children Gabriel and Max had seen Assange since March 22.
The visit is welcome news for all supporters of Assange and democratic rights. But it has underscored the brutal conditions in which he is held by the British authorities, despite not having been convicted of any crime, and has sparked renewed fears that his health is continuing to deteriorate.
In comments to the PA news agency after the visit, Morris said that the experience had been “incredibly stressful” but that she was relieved to have been able to see Assange.
“We had to keep social distancing and Julian was told he would have to self-isolate for two weeks if he touched the children,” Morris said. “Julian said it was the first time he had been given a mask because things are very different behind the doors.”
She added: “At least he got to see the children, even though he couldn’t touch them. The children were both calm. We all remained seated the whole time.” 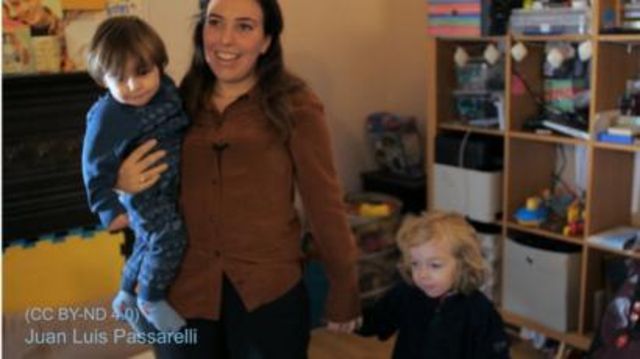 Morris with her and Assange's sons
Morris said that the older of the boys, Gabriel, who is three-years old, showed off his abilities to count and to recite the alphabet. Gabriel was born when Assange was a political refugee in Ecuador’s London embassy, where his arbitrary detention was enforced by British threats to arrest him if he set foot outside the building.
The infant child was immediately targeted for intrusive surveillance and other human rights violations by the US Central Intelligence Agency. Max, who is one-year-old, first met Assange in 2019 at Belmarsh, a facility dubbed Britain’s Guantánamo Bay.
Speaking of Assange’s physical condition, Morris said: “He is in a lot of pain.” She stated that he continues to suffer from a frozen shoulder, a long-term condition compounded by a lack of adequate medical treatment. He had also recently sprained his ankle.
“I could not see him very clearly because of the visors, but he looked a lot thinner. He was wearing a yellow armband to indicate his level of prisoner status, and you could see how thin his arms were,” Morris explained.
The confirmation that Assange has not been provided with a mask is evidence that the British state wants him dead. That the most high-profile political prisoner in the world, detained in a country falsely held up as a beacon of democracy, was not provided with the most basic protection during an unprecedented global pandemic sums up the criminality of the decade-long persecution of Assange.
At the height of the crisis, hundreds of prison staff and inmates at penitentiaries across the country were struck down by the virus, including in Belmarsh. Warnings from medical experts that Assange was particularly susceptible to succumbing to COVID-19, given his chronic respiratory issues, were ignored and an application for bail contemptuously dismissed.
The calls for Assange’s release on medical grounds during the pandemic followed statements of concern by doctors from around the world since November last year that Assange could die in Belmarsh due to a lack of adequate treatment.
United Nations Special Rapporteur on Torture Nils Melzer has repeatedly condemned Assange’s imprisonment as a continuation of government abuses that have resulted in the WikiLeaks founder displaying the medically-verifiable symptoms of psychological torture. 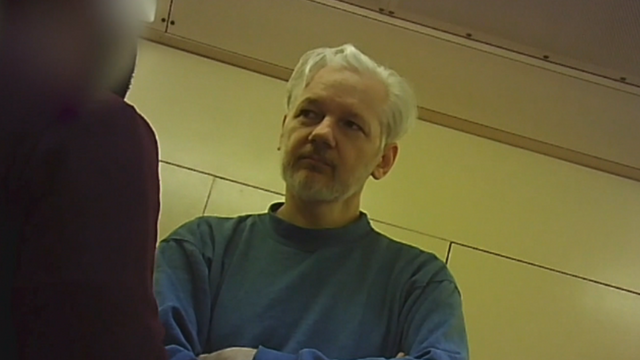 Assange in Belmarsh Prison sometime last year
The latest indications of Assange’s physical condition follow reports that he looked poorly when he attended his last court hearing by video link on August 14. Assange was reportedly coughing through much of his brief appearance and appeared to be unwell.
As the WSWS wrote in a perspective article, the August 14 hearing “made clear, if any further proof was needed, that the prosecution of Julian Assange is a shameful and degrading show trial, intended to railroad an innocent man to prison or death for revealing the crimes of US imperialism.”
In a blatant violation of legal procedures and due process, the US filed a superseding indictment of Assange days before the hearing, and more than a year after the deadline elapsed for them to present a final charge sheet. This is a transparent attempt to prevent Assange’s legal team from presenting any defence.
The new indictment contains no new information or charges. It is the tortured product of American intelligence agents and two of their informants, including one previously convicted of impersonating Assange and stealing money from WikiLeaks.
The gross abuse has not been condemned by any of the official political parties in Britain, the US or Australia. By their silence, all of them, including Labor and the Greens in Australia and the British Labour Party, have given their blessing to the show trial that Assange is set to be subjected to when extradition hearings recommence on September 7.
The unprecedented persecution of the WikiLeaks publisher has also been treated as a non-event by the corporate media, which enjoy the closest ties with the military and intelligence agencies that have spearheaded the pursuit of Assange.
The substantial public support that Assange enjoys, which stands in marked contrast to the stance of the political and media establishments, has been expressed in the response to an online fundraiser for his legal expenses, initiated last week by Morris.
The initial target of £25,000 was achieved within days. A stretch goal of £50,000 has since been surpassed and the appeal is well on its way to the new target of £75,000. As of this writing, almost £68,000 has been contributed by 1,563 people from around the world.
Morris provided an update on Wednesday, writing: “Julian wanted me to thank you personally for all of the help you have provided in covering his legal fees to fight the extradition to the USA, where he faces 175 years in prison.”

OUT OF MIND » THE INSANITY OF REALITY » WIKILEAKS & JULIAN ASSANGE » Julian Assange receives first visitors in six months: “He is in a lot of pain”