Failure to build up capacity for reopening allowed the outbreak to spiral out of control, say state officials — including many from Gov. David Ige’s party. | Audrey McAvoy/AP Photo
By ALICE MIRANDA OLLSTEIN and DAN GOLDBERG
08/30/2020 07:00 AM EDT

Hawaii’s control of the coronavirus has swiftly unraveled this summer, transforming what was the nation’s best-performing state into one of the worst.
Just two months ago, the island state had the fewest cases per capita in the country at less than two dozen per day. Democratic Gov. David Ige was praised for acting early to close Hawaii’s borders and impose strict quarantines, a painful economic sacrifice for a state heavily dependent on tourism.

But a ten-fold surge in coronavirus infections and hospitalizations over the last month has triggered new shutdown orders and a scramble to bolster the public health measures state officials neglected before reopening. When the state was locked down and caseloads were smaller, a key to Hawaii’s success was quick testing and contact tracing to find people exposed to the virus. But failure to build up that capacity for reopening, along with growing public complacency around social distancing measures, allowed the outbreak to spiral out of control, say numerous state officials — including many from Ige’s party.

Now the state, once hailed as a Covid-19 success story, has become a cautionary tale for other parts of the country that are preparing to open schools and loosen economic restrictions as infection rates come down. For public health experts and Hawaii officials, the state’s worsening outbreak is a stark reminder that this virus will easily exploit gaps in defenses.
“Hawaii was in an optimal situation, set up for success because it’s an island,” said Cyrus Shahpar, a former emergency response leader at the Centers for Disease Control and Prevention who now leads the outbreak tracker Covid Exit Strategy. “But you need to have ongoing eyes on the virus and be ready to react early when you see a handful of cases and have enough of a workforce to deal with it.”


Only a handful of states have conducted fewer tests per capita than Hawaii — a performance so dismal that Surgeon General Jerome Adams was dispatched to the state this week to announce federal support for 70,000 tests over the next two weeks. The state only has about 100 contact tracers, well short of the 400-plus tracers public health experts say are needed, and the governor earlier this month replaced the head of the contact tracing program after a whistleblower claimed Hawaii’s health department misled residents about the state’s preparedness.

Hawaii still has the country’s fewest deaths per capita, but health experts fear that deaths could soon surge as they did in other states with major outbreaks this summer. One-fifth of Hawaii’s 55 total coronavirus deaths were reported in just the past week.

State officials are again clamping down on economic activity as over 200 new infections are reported daily, implementing restrictions reminiscent of the pandemic’s early days. Ige and Honolulu Mayor Kirk Caldwell last week issued new rules prohibiting any gathering of more than five people in Oahu, where the bulk of the state’s population lives. They went further this week, imposing a new stay-at-home order on the island.
Local officials, public health experts and business leaders say these measures could have been avoided had the state not wasted valuable time to prepare during the first shutdown — and that it will be much harder now to contain the outbreak. They believe the Ige administration got complacent and mapped out a reopening plan that defied best practices for managing the virus — for instance, by opening indoor dining and salons before people could return to safer outdoor spaces like beaches and hiking trails.
“Back when our cases were very low, in the single digits, our leaders were talking about how we can’t be complacent and had to prepare to do all we can to prevent a second wave from occurring and prepare for it if it comes,” said Rep. Tulsi Gabbard (D-Hawaii), who’s questioned Ige on the state’s use of federal relief funds. “That would have been the moment to execute on all this. If [Ige] had done his job back when our numbers were low, we wouldn’t be in this position.” 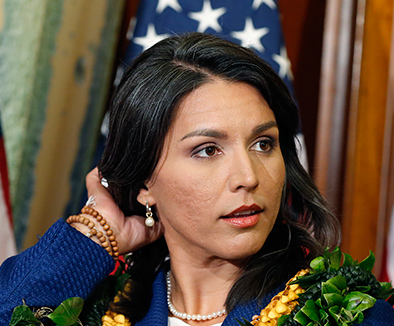 Rep. Tulsi Gabbard (D-Hawaii) participates in a TV interview at the U.S. Capitol. | Alex Wong/Getty Images
The new shutdown orders will mean more economic pain in a state with one of the highest unemployment rates at 13 percent. The state’s reopening date for tourism has been pushed back yet again, and the hard-hit business community is bracing for the possibility of even wider shutdowns.


And as elsewhere in the United States, a deep racial disparity has emerged in Hawaii’s outbreak. Pacific Islanders account for 30 percent of infections while they make up just 4 percent of the state’s population.
Ige’s office declined to directly address questions from POLITICO and instead pointed to public statements defending the administration’s coronavirus response and blaming the public for flouting social distancing guidelines. Ige’s administration said the seeds of the current outbreak were planted over the July Fourth weekend, when residents flocked to crowded beaches and many ignored pleas to wear masks.
“No amount of contact tracing would have prevented the spike we’ve seen,” said state health department Director Bruce Anderson in a press conference last week. “Contact tracing is a tool and it is important to help bring the numbers down again, but the big surge of cases we are seeing is because of community spread.”
However, some local officials said a more robust contact tracing operation could have helped the state handle the fallout from July Fourth. Quickly identifying those exposed to the virus could have broken chains of transmission sooner, possibly preventing hundreds of infections.
“You knew July Fourth was coming,” said Democratic state Sen. Donna Mercado Kim. “Why didn’t you prepare for that?”
Some also said they were baffled by the state health department’s refusal to accept outside help with contact tracing, even as health officials talked up its importance. The department as recently as June turned down hundreds of volunteers to help with contact tracing, an effort that was being led by Lt. Gov. Josh Green, the head of the state’s largest heath insurer, and the state’s top crisis official.
“In hindsight … if we started this earlier it would have been more beneficial but we didn’t expect the spike to be exponentially growing like it did,” said Maj. Gen. Kenneth Hara, director of the Hawaii Emergency Management Agency and a member of the National Guard.

But even some who’ve questioned Ige’s decisions say the Trump administration’s hands-off approach and constantly shifting guidance deserves some of the blame. They said it was especially challenging for the island state to acquire medical supplies and testing equipment earlier in the pandemic, when the federal government told states to find them on their own.
“One of the tragedies in my view is that there is still no national response,” said Sen. Mazie Hirono (D-Hawaii) in an interview. “Every governor has been left to their own devices and forced to compete with each other for PPE, testing kits and all of that. And you see the chaos that has ensued.”

In the unfolding pandemic, economic crisis and reckoning on race, governors and mayors are shaping our shared future. Who are the power players, and how are they driving politics and influencing Washington?
Full coverage »


Testing capacity has improved in the state — since May, the number of daily tests has quadrupled to roughly 2,800. But it hasn’t kept pace with the virus spread, and the testing positivity rate has increased from just under 1 percent to over 6 percent in the last six weeks.
Ige in public statements has insisted the current outbreak shouldn’t obscure the state’s early success managing the virus, and he has insisted the contact tracing program has been “better than average.”
However, the program has been a major source of tension between Ige and state lawmakers, who were so concerned about its performance that they made an unannounced visit to the Hawaii Health Department earlier this month — prompting an admonishment from Ige. The state auditor’s office on Wednesday also accused the health department of stonewalling its efforts to examine the program.
Ige said the state is adding more contact tracers but hasn’t laid out specific targets for hiring. Caldwell, the Honolulu mayor, said his city will work with the state health department to hire between 250 and 500 contact tracers.
“Hopefully we will see the number decline to a level where we can manage our contact tracing,” Caldwell, a Democrat, said at a press conference on Wednesday. “We’re going to use this time to reset.”