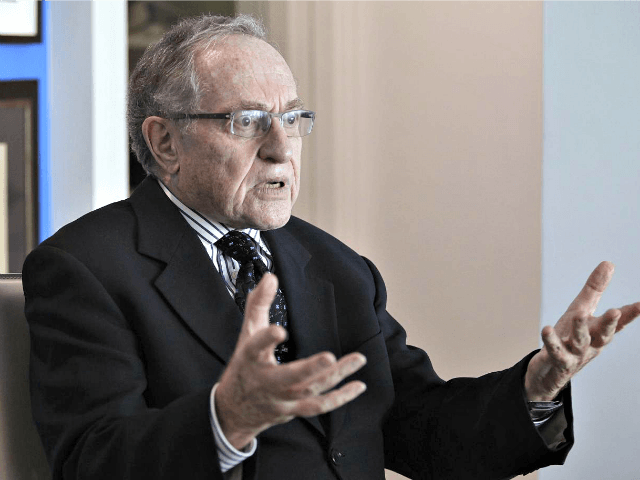 Source: Joel B. Pollak
Harvard Law School professor emeritus Alan Dershowitz is suing CNN for $300 million for misreporting the substance of his defense of President Donald Trump in the Senate impeachment trial earlier this year.
Dershowitz, who filed suit Wednesday in a federal court in Florida, alleges that CNN and its various commentators “doctored the tape” of his comments on the Senate floor in January to portray him as a kind of “Adolf Hitler” who believed that a president can break the law at will.

At the time, Breitbart News noted that CNN and several Democrats had misquoted Dershowitz’s comment:

Here is what Dershowitz actually said.
He began by noting that some forms of a “quid pro quo” were unlawful and impeachable: “The only thing that would make the quid pro quo unlawful would be if the quo were in some way illegal.”
He then explained: “If a president does soehing which he believe will help him get elected in the public interest, that cannot be the kind of quid pro quo that results in impeachment.”

As he wrote in a Newsman op-ed in March (original emphasis):

CNN repeatedly claimed and continues to claim through its reporters and talking heads — that during the impeachment trial I had told senators, in the words of Paul Begala, that presidents are “immune from every criminal act, so long as they could plausibly claim they did it to boost their re-election effort.”
Some talking heads went so far as to say that I told the senate that a president could shoot his opponent, or tamper with voting machines, as long as he believed his re-election was in the public interest. Joe Lockhart compared me to Hitler, Stalin, and Mussolini and said my argument would lead to genocide.
A simple truth-check, if CNN had bothered to conduct one, would have shown that I said exactly the opposite of what CNN said I had said: I told the senators — both in my speech and in answers to questions — that if a president did anything that was “in some way illegal” or “corruptly motivated” or that involved “personalpecuniary.” benefit, he could be impeached, even if his motive was to help his re-election, which he believed was in the public interest. My point was that if a president did something entirely lawful that was motivated in part by helping his re-election, that mixed motive would not turn a legal act into an impeachable offense.
CNN turned my statement on its head, wrenched a few words out of context while omitting other crucial words, and lied to its viewers.

Trump’s opponents repeatedly misquoted him — apparently deliberately — in an effort to defeat the president’s arguments.
House impeachment manager Rep. Adam Schiff (D-CA) lied to the Senate, telling it that Dershowitz had claimed that a president could not be impeached for a “quid pro quo” and it “doesn’t matter how corrupt that quid pro quo is.”
Sen. Mitt Romney (R-UT) also misquoted Dershowitz, claiming he had argued that “there could be no impeachment without a statutory crime.”
Dershowitz actually said the opposite: “There need not be, in my view, conclusive evidence of a technical crime that would necessarily result in a criminal conviction.”
Though the president was ultimately acquitted, Dershowitz believes that CNN’s incorrect portrayal of his argument — in defiance of the available evidence — caused him repetitional harm.
Washington Post media critic Eric Wemple told Dershowitz to “stop whining.” In the process, Wemple appears to have bolstered Dershowitz’s case: Wemple noted “how widely Dershowitz was panned for his argument,” apparently not realizing that Dershowitz was “panned” largely because the argument was misrepresented by CNN and others.
Dershowitz is seeking $50 million in compensatory damages and $250 million in punitive damages.