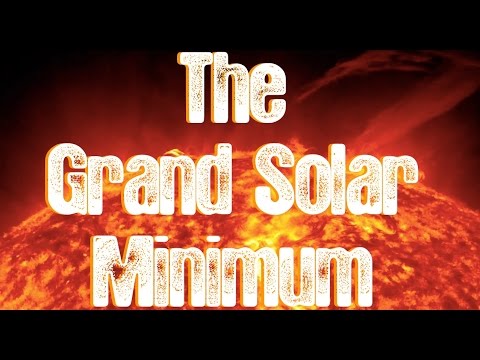 Source – naturalblaze.com
– “…While nowhere near complete, the article successfully refutes the politicized, dogmatic lie that the science is settled–the science is never settled. Ever. And while modern civilization continues to writhe in the dark ages of self-serving-agendas and socialist-dreams, the reality of our cosmological journey spins-on”
11 Scientific Predictions For The Upcoming Grand Solar Minimum – By Cap Allon
There is ever-mounting evidence warning the next epoch will be one of sharp terrestrial cooling due to a relative flat-lining of solar output.
The exact time-frame and depth of this next chill of solar minimum is still anyone’s guess, and the parameters involved (i.e., galactic cosmic rays, geomagnetic activity, solar wind flux etc.) remain poorly understood. However, there are some great minds on the job, and below I’ve collated 11 best-guesses based on published scientific papers from respected researchers in the field. The list begins with eminent Russian astrophysicist K. Abdussamatov–though it is in no particular order.

“The quasi-centennial epoch of the new Little Ice Age has started at the end 2015 after the maximum phase of solar cycle 24. The start of a solar grand minimum is anticipated in solar cycle 27 ± 1 in 2043 ± 11 and the beginning of phase of deep cooling in the new Little Ice Age in 2060 ± 11.
“The gradual weakening of the Gulf Stream leads to stronger cooling in the zone of its action in western Europe and the eastern parts of the United States and Canada. Quasi-bicentennial cyclic variations of TSI together with successive very important influences of the causal feedback effects are the main fundamental causes of corresponding alternations in climate variation from warming to the Little Ice Age.”

“The Sun has entered into the modern Grand Solar Minimum (2020–2053) that will lead to a significant reduction of solar magnetic field and activity like during Maunder minimum leading to noticeable reduction of terrestrial temperature. … From 1645 to 1710, the temperatures across much of the Northern Hemisphere of the Earth plunged when the Sun entered a quiet phase now called the Maunder Minimum. This likely occurred because the total solar irradiance was reduced by 0.22%. That led to a decrease of the average terrestrial temperature measured mainly in the Northern hemisphere in Europe by 1.0–1.5°C. … The reduction of a terrestrial temperature during the next 30 years can have important implications for different parts of the planet on growing vegetation, agriculture, food supplies, and heating needs in both Northern and Southern hemispheres. This global cooling during the upcoming grand solar minimum (2020–2053) can offset for three decades any signs of global warming and would require inter-government efforts to tackle problems with heat and food supplies for the whole population of the Earth.”

“This empirical modeling of solar recurrent patterns has also provided a consequent multi-millennial-scale experimental forecast, suggesting a solar decreasing trend toward grand (super) minimum conditions for the upcoming period, AD 2050–2250 (AD 3750–4450). … Solar activity (SA) has non-linear characteristics that influence multiple scales in solar processes (Vlahos and Georgoulis, 2004). These millennialscale patterns of reconstructed SA variability could justify epochs of low activity, such as the Maunder minimum, as well as epochs of enhanced activity, such as the current Modern Maximum, and the Medieval maximum in the 12th century.  … We can conclude that the evidence provided is sufficient to justify a complete updating and reviewing of present climate models to better consider these detected natural recurrences and lags in solar processes.“

“These millennial-scale patterns of reconstructed solar activity variability could justify epochs of low activity, such as the Maunder Minimum, as well as epochs of enhanced activity, such as the current Modern Maximum, and the Medieval Maximum in the 12th century. Although the reason for these solar activity oscillations is unclear, it has been proposed that they are due to chaotic behavior of non-linear dynamo equations (Ruzmaikin, 1983), or stochastic instabilities forcing the solar dynamo, leading to on-off intermittency (Schmittet al., 1996), or planetary gravitational forcing with recurrent multi-decadal, multi-centennial and longer patterns (Fairbridge and Sanders, 1987; Fairbridge and Shirley,1987; Charvátová, 2000; Duhau and Jager, 2010; Perry and Hsu, 2000). It should be noted that all proponents of planetary forcing have forecasted a solar Grand Minimum for the upcoming decades, but one of them has also forecasted a Super Minimum for the next centuries (Perry and Hsu, 2000).”
Mörner, 2015:
“By about 2030-2040, the Sun will experience a new grand solar minimum. This is evident from multiple studies of quite different characteristics: the phasing of sunspot cycles, the cyclic observations of North Atlantic behaviour over the past millennium, the cyclic pattern of cosmogenic radionuclides in natural terrestrial archives, the motions of the Sun with respect to the centre of mass, the planetary spin-orbit coupling, the planetary conjunction history and the general planetary-solar-terrestrial interaction. During the previous grand solar minima—i.e. the Sporer Minimum (ca 1440-1460), the Maunder Minimum (ca 1687-1703) and the Dalton Minimum (ca 1809-1821)—the climatic conditions deteriorated into Little Ice Age periods.”

“The concept of an anthropogenic global warming (AGW) driven by the increase in atmospheric CO2 is compared to the concept of a natural global warming (NGW) driven by solar variability. The application of the AGW concept only rests on models, whilst the NGW concept rests on multiple observational and evidence-based facts. … Several scientists (e.g. [Landscheidt, 2003] [Charvátová, 2009] [Mörner, 2010] [ Mörner, 2015] [Abdussamatov, 2016]) have shown that we, in fact, are approaching a New Grand Solar Minimum in about 2030-2050. In analogy with the documented climate conditions during the Spörer, Maunder and Dalton Minima, we may expect the return of a New Little Ice Age.”

“A simple harmonic model based on the 9.98, 10.9 and 11.86 year oscillations hindcast reasonably well the known prolonged periods of low solar activity during the last millennium such as the Oort, Wolf, Sporer, Maunder and Dalton minima … The harmonic model herein proposed reconstructs the prolonged solar minima that occurred during 1900-1920 and 1960-1980 and the secular solar maxima around 1870-1890, 1940-1950 and 1995-2005 and a secular upward trending during the 20th century: this modulated trending agrees well with some solar proxy model, with the ACRIM TSI satellite composite and with the global surface temperature modulation since 1850. The model forecasts a new prolonged grand solar minimum during 2020-2045.”

“The effect of the Sun’s activity on Earth’s climate has been identified since the 1800s. However, there are still many unknowns regarding the mechanisms connecting the Earth’s climate to the variation in solar irradiance. Climate modelling that implements the solar sciences is a novel approach that accounts for the considerable effect that natural factors have on the climate, especially at regional level. This paper discusses the noticeable effect that planet oscillations have on the Sun’s activity, which gives a very good correlation with the observed patterns in global surface temperatures, rainfall records and sea levels. In agreement with many studies that have identified a 60-year cycle in the variation of Earth’s temperature, it is expected that surface temperatures will reach a trough of the cycle around 2030-2040. … Many studies have reported that lower than average European temperatures were recorded during periods of low solar activity [3]–[7]. Such periods of low solar activity are the Maunder minimum (1645-1715), Dalton minimum (1800-1820), 1900 minimum (1880-1900), and a slight decrease between 1940 and 1970. … Current predictions on Solar activity show that we are in a low sunspot cycle, which is similar to that of the 1900 Minimum, and subsequent cycles are predicted to have even lower Solar activity, and therefore a drop in global temperatures is expected.”

“Deterministic models based on the stationary periods confirm the results through a close relation to known long solar minima since 1000 A.D. and suggest a modern MAXIMUM period from 1940 to 2015. The model computes a new Dalton-type sunspot MINIMUM from approximately 2025 to 2050 and a new Dalton-type period TSI minimum from approximately 2040 to 2065. … Periods with few sunspots are associated with low solar activity and cold climate periods. Periods with many sunspots are associated with high solar activity and warm climate periods.”

However, while nowhere near complete, the article successfully refutes the politicized, dogmatic lie that the science is settled–the science is never settled. Ever. And while modern civilization continues to writhe in the dark ages of self-serving-agendas and socialist-dreams, the reality of our cosmological journey spins-on. The Sun, it appears, is entering an epoch of relative hibernation and the impact this will have on earth’s terrestrial climate is expected to match every Grand Solar Minimum of the past: cooling, struggles, crop loss, and famine — increases of a trace atmospheric gas will be our destroyer, nor, on the other hand, is it capable of being our savior from what’s about to hit.
1) Research the past and heed the warnings it delivers.
2) Recognize the controlling agendas at play and reject them.
3) Prepare for the COLD TIMES and a REFREEZING of the mid-latitudes: events occurring in line with historically low solar activity, cloud-nucleating Cosmic Rays, and a meridional jet stream flow, with both NOAA and NASA appearing to agree, if you read between the lines — NOAA says we’re entering a ‘full-blown’ Grand Solar Minimum in the late-2020s, and NASA sees this upcoming solar cycle (25) as “the weakest of the past 200 years”, with the agency correlating previous solar shutdowns to prolonged periods of global cooling here.