OUT OF MIND » BREAKING NEWS & HOT TOPICS » THE GREAT DIE OFF » “The COVID Vaccine Should be Tested on Politicians First. If They Survive, the Vaccine Is Safe. If They Don’t, Then the Country Is Safe.”

“The COVID Vaccine Should be Tested on Politicians First. If They Survive, the Vaccine Is Safe. If They Don’t, Then the Country Is Safe.”

“The COVID Vaccine Should be Tested on Politicians First. If They Survive, the Vaccine Is Safe. If They Don’t, Then the Country Is Safe.” Fri Oct 02, 2020 9:36 am

“The COVID Vaccine Should be Tested on Politicians First. If They Survive, the Vaccine Is Safe. If They Don’t, Then the Country Is Safe.” 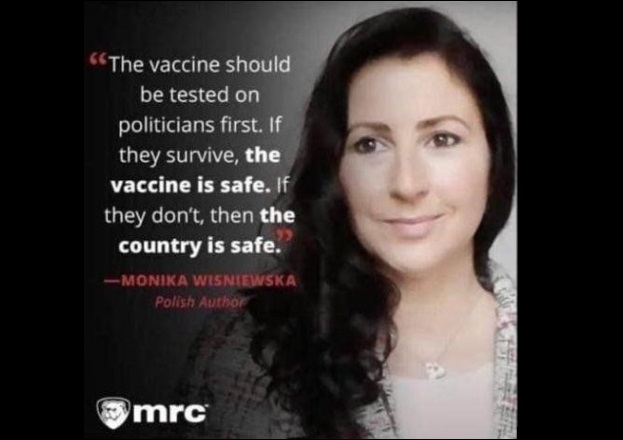 “The vaccine should be tested on politicians first. If they survive, the vaccine is safe. If they don’t, then the country is safe.”

Sounds like a joke, but it isn’t. It is dead-serious.
One may want to add to this very sensible proposal that the very first to be vaccinated with his own Moderna human genome-altering vaccine, should imperatively be the czar of vaccines, Bill Gates.
But no special fabrication for Mr. Gates. The real thing. Controlled by independent honorable virologists, immunologists and DNA-specialized biologists.
If Mr. Gates “survives” with none of the devastating side effects (or premier effects), as suffered by the first 45 healthy volunteers for his vaccine (all had to be hospitalized with severe health damage), he may start testing it on a larger population (currently planned on 4,000 healthy volunteers) – and then only should the special DNA-modifying vaccine become subject of an objective information campaign, telling the populace at large and especially those, who are potentially interested in altering their DNA forever, what Covid-19 vaccination with the Moderna inoculation means and implies.
Then only should it become open for those who voluntarily want to alter their genome, in full knowledge that whatever later effect could result from it, CANNOT ever be corrected and the DNA changes might be passed on to the next and following generations.
Aside from that, there is high skepticism among the people all around the world about any Covid-19 vaccine. For several reasons.
Perhaps first, because there is really no need for a vaccine.
There are other well-known remedies that can heal and have proven effective in healing the novel coronavirus, especially hydroxychloroquine (known for at least 60 years and used successfully to fight malaria and recently was equally successfully used against Covid-19), and sodium chlorite (NaCIO), best administered according to a medical supervised formula.
And there are others, like the Cuban developed Interferon beta-1a. China used hydroxychloroquine and Interferon beta-1a and combinations of them, as well as other non-vaccine drugs to successfully and rapidly combat and control the SARS-2-NoV (Covid-19).
Yet, both of these very efficient medications, hydroxychloroquine and NaCIO have been banned in the US and in most EU countries – prohibited under penalties to medical doctors who use them – in favor of not-yet known vaccines – vaccines which promise to become a multi-multi trillion-dollar business.
Just imagine, what world have we become! No wonder people become suspicious.
According to an Axios-Ipsos poll, published by RT on 29 September 2020, based on 1,000-plus participating US-American adults, less than 50% of the respondents said they would NOT take a vaccine – any covid vaccine – even if paid US$ 100; 44% said they would accept the vaccine if offered an incentive of US$ 100.
Reasons have to do with the mistrust in politicians, and in specific people who promote vaccination “über alles” – and have a vested interest.
Other reasons include the warp-speed by which CDC and especially Dr. Fauci from NIAID / NIH – the co-czar of vaccination – want to push the vaccine onto people.
It doesn’t help either that CDC and NIAID / NIH have vested interests in vaccines, as they own hundreds of patents and make millions from vaccines.
Covid has served to highly politicize inoculation, especially, but not exclusively, Covid-19 vaccinations – and to generate not only an enormous profit boost for pharmaceuticals and their shareholder, but to provide them with a “sustainable” bonanza for decades to come, as science knows and tells us, corona viruses do not go away – similarly to flu-viruses (also a type of corona virus) – and vaccinations have to be repeated annually.
That’s the state of affairs in the United States. In Europe, no such inquiries have been published yet, to my knowledge, but anti-covid vaccine skepticism is at least as high in Europe as it is in the US, if not higher.
Most covid-vaccine resisters say they would refuse vaccination to the end, or if there was really no way out, they’d rather be vaccinated by a Russian, Chinese or Cuban anti-covid vaccine, than one from the west. That’s the level of trust treacherous western politicians have left.
What Monika Wisniewska proposes, politicians first and depending on the results, the people next.
This might be an elegant way out – always, but always, provided that politicians get exactly the same vaccine injected into their arm as the population at large – and that the vaccines are clear of any nano-chip or similar digitizing technology.
Since trust in western politicians is at its lowest, this would have to be monitored independently by honorable non-mainstream scientists.
Read the full article at Global Research
Peter Koenig is an economist and geopolitical analyst. He is also a water resources and environmental specialist. He worked for over 30 years with the World Bank and the World Health Organization around the world in the fields of environment and water. He lectures at universities in the US, Europe and South America. He writes regularly for online journals such as Global Research; ICH; New Eastern Outlook (NEO) and more. He is the author of Implosion – An Economic Thriller about War, Environmental Destruction and Corporate Greed – fiction based on facts and on 30 years of World Bank experience around the globe. He is also a co-author of The World Order and Revolution! – Essays from the Resistance. He is a Research Associate of the Centre for Research on Globalization.

OUT OF MIND » BREAKING NEWS & HOT TOPICS » THE GREAT DIE OFF » “The COVID Vaccine Should be Tested on Politicians First. If They Survive, the Vaccine Is Safe. If They Don’t, Then the Country Is Safe.”

» BREAKING: Dr. Fauci admits COVID vaccine may not be safe
» FDA Says J&J COVID Vaccine ‘Safe,’ Emergency Approval Expected Within Days
» Beijing starting to lock down - 20 million residents being tested for Covid.
» “The COVID shot is a normal vaccine. The COVID shot is safe. These injuries and deaths are normal.”
» At Least 3 Children Die and 120 Hospitalized in Vietnam After Receiving Pfizer COVID-19 Vaccine – 4 Adults Die from Vero Cell Covid Vaccine