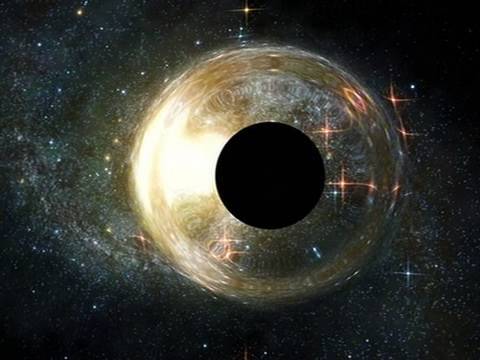 Don't worry — there's a perfectly reasonable explanation.
An outrageously strange paper claims, among other things, that there’s a black hole at the center of the Earth.
And somehow, it got published in an actual scientific journal, the Open Access Macedonian Journal of Medical Sciences — baffling mainstream scientists.
“Recently, some scientists from NASA have claimed that there may be a black hole like structure at the centre of the earth,” the paper begins. “We show that the existence of life on the earth may be a reason that this black hole like object is a black brane that has been formed from biological materials like DNA.”
Then it gets even weirder, like a Mad Lib of conspiracy theories and scientific-sounding words.
“Size of this DNA black brane is 109 times longer than the size of the earth’s core and compacted interior it,” it continues. “By compacting this long object, a curved space-time emerges, and some properties of black holes emerge.”
When researchers dug the paper up this week — it was published about a year ago, but attracted little attention until now — they expressed consternation about both the contents of the paper and how it ended up in what appears to be a vaguely credible scientific journal. The bylines on the paper do appear to correspond to actual researchers at a variety of European universities. But its claims, about a black hole formed by something “like DNA,” are hilariously tabloid-esque.
Here’s Paul Byrne, an associate professor of planetary science at North Carolina State University:
The most likely explanation, according to Cambridge University mathematician Sarah Rasmussen, is that the authors purposely submitted a ridiculous paper in order to expose “predatory journals” that purport to be normal, peer-reviewed publications, but in reality apply little scrutiny to material that they publish, often in order to collect publication fees.
As Rasmussen pointed out, the lead author on the paper has previously published a paper about the threat posed by predatory journals.
And, as a nail in the coffin, she also noticed that the Open Access Macedonian Journal of Medical Sciences was previously fooled by a sting operation by Science, back in 2013, which attempted to get outlandish papers published in journals that claimed to peer review their material.
So, fortunately, it appears that there isn’t actually a black hole in the center of the Earth — although there may be some form of black hole where the Open Access Macedonian Journal of Medical Sciences‘s editorial standards are supposed to be.

» The Supermassive Black Hole at the Center of Our Galaxy’s Flashed Like Crazy – Report
» Strange triangle silhouette appears in center of a large hole in the clouds!
» Black Hole On The Sun Blasting Earth October 26, 2016
» “Black Hole Police” Spot Extragalactic Black Hole
» Strange Hole In Earth Sun Appears, Is It Hollow With A Planet Or Planets Within?