OUT OF MIND » MOTHER NATURE » NATURE & ENVIRONMENT » There were so many birds falling out of the sky that we didn’t know what was going on in Philadelphia!

There were so many birds falling out of the sky that we didn’t know what was going on in Philadelphia!

There were so many birds falling out of the sky that we didn’t know what was going on in Philadelphia! Sun Oct 11, 2020 3:50 pm

Admin
Posts : 99266
Join date : 2012-01-04
Location : Woodstock Nation
There were so many birds falling out of the sky that we didn’t know what was going on in Philadelphia! 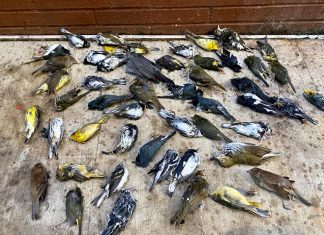 Up to 1,500 birds flew into some of Philly’s tallest skyscrapers one day last week and the slaughter shook bird-watchers. Picture: STEPHEN MACIEJEWSKI
Stephen Maciejewski dropped to a knee on a Center City sidewalk Wednesday morning and gently scooped up a yellow-billed cuckoo that had smashed into a skyscraper and died on its way to Central America or the West Indies.
“This probably happened yesterday,” said Maciejewski, a 71-year-old retired social worker and volunteer for Audubon Pennsylvania. He labeled a plastic bag with the time, date, and location, tucked the slim migrator into it, and continued his rounds.
Maciejewski gets emotional when he speaks about all the birds he finds, but nothing, he says, prepared him for what happened Friday.


“So many birds were falling out of the sky, we didn’t know what was going on,” he said, choking up. “It was a really catastrophic event. The last time something like this happened was in 1948.“
On Friday, an estimated 1,000 to 1,500 birds flew into buildings in a 3½-block radius of Center City overnight and into early morning during what Maciejewski called a “perfect storm” of avian calamity. That could mean thousands more likely perished elsewhere in the city, he estimated.

He collected 400 birds between 5 and 8 a.m. in the radius he regularly covers roughly spanning 17th to 19th Streets between Market Street and JFK Boulevard — an astonishing number, according to an Audubon Pennsylvania official.

“There were so many, I was picking up five at a time,” Maciejewski said. “One guy from building maintenance dumped 75 living and dead birds in front of me as if it were a collection.“
Maciejewski logs each bird, noting its flight path, time, and location of impact.
“There were so many birds I ran out of supplies.“
He can collect only so many birds because building maintenance crews and Center City District workers sweep detritus, including bird bodies, early each morning before commuters arrive. Maciejewski has established a rapport with some workers who save birds for him.
“We collected almost 100 birds on one small roof,” he said of Friday’s haul.
In the five days after, things returned to normal, and Maciejewski has collected no more than 32 birds a morning.


Why so many birds in one day?

Maciejewski and Audubon Pennsylvania can only guess.
“This is complicated stuff,” he said.
It appears weather events lined up for the worst during what was likely the peak of migratory birds’ flight from Canada, Maine, Upstate New York, and elsewhere toward Central and South America. A sudden plunge in temperatures could have prompted the birds to start their flights en masse.
In Philadelphia, Friday brought low cloud cover, light rain, and a full moon, all of which could have pushed the birds lower. Birds flying from remote Northern habitats might have little experience with glass.
As they reached Philly in the dark, the birds would have been attracted to the lights inside the buildings. Some of the skyscrapers have indoor atriums, which could have led birds to think they could land there.
On any given morning, street trees reflect in the glass, making it appear they are inside buildings.
Maciejewski began this volunteer effort Sept 1. and will continue through the end of the month. He said he routinely finds the most downed birds near the two Comcast buildings, BNY Mellon Center, and Logan Square, but also just about anywhere. On Wednesday morning, the yellow-billed cuckoo was killed at 15th and Market Streets.
Inquirer columnist Inga Saffron has written about the impact of glass buildings on birds. The U.S. House of Representatives in July introduced the Bird-Safe Buildings Act of 2019. If approved, it would require buildings to use methods designed to eliminate bird crashes.
“We have to bring people together to make the glass friendlier to birds,” Maciejewski said. “We’re contributing to the extinction of American songbirds.“
Keith Russell, an ornithologist with Pennsylvania Audubon, said he placed the birds Maciejewski collected Friday in a freezer in his Germantown home. The birds will be taken to the Academy of Natural Sciences of Drexel and logged.
Russell said he still hasn’t been able to sort through all the species collected Oct. 2, but they included various warblers, cuckoos, and others. The birds are counted each morning for a Pennsylvania Audubon database.
“This is a very big issue in the world of bird conservation,” Russell said. “The estimates are 350 million to one billion birds die every year colliding with buildings.“
Russell has been with Pennsylvania Audubon since 2003. But before that he worked at the Academy’s bird department.
He said the last big bird kill of this scope happened 72 years ago when a massive flock struck what was then the PSFS Building at 12th and Market Streets, now a Loews hotel.
“Think of what the birds experience,” Russell said. “It’s like being on a dark highway and you suddenly see headlights. You don’t see anything else but those lights. On Oct. 2, birds could have been overtaken by a rainstorm, or conditions. They think ‘We’ve got to stop, and they see all those buildings and bright lights. …‘
“For birds, it was the equivalent of a couple of jumbo jets going down and everyone dies.“
Jason D. Weckstein, a professor and ornithologist at Drexel, said the birds will be studied for things such as diet.
“The birds will go into the collection at the Academy for hundreds of years,” Weckstein said. “They have stories to tell.“
And you bet our new technology did also play a big role in this mass dird die-off.

OUT OF MIND » MOTHER NATURE » NATURE & ENVIRONMENT » There were so many birds falling out of the sky that we didn’t know what was going on in Philadelphia!