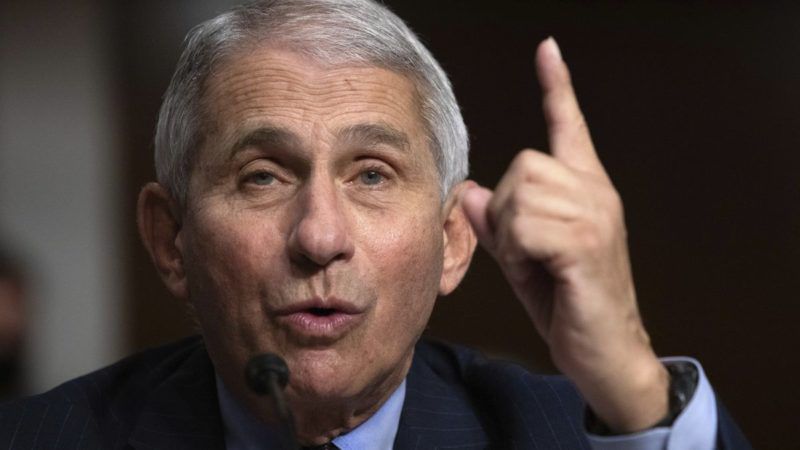 Source: Baxter Dmitry
Dr Anthony Fauci has demanded American families “cancel thanksgiving parties” this year, saying that people “may have to bite the bullet and sacrifice that social gathering,” according to a report.
Dr Fauci said he was worried people will be meeting up from separate households, sometimes from out of town and interstate, and gathering inside.
Fauci, the head of the National Institute of Allergy and Infectious Diseases, said families should try to limit the number of people attending Thanksgiving and try to keep it to their own household.
He told CBS Evening News: ‘I think given the fluid and dynamic nature of what’s going on right now in the spread and the uptick of infections, I think people should be very careful and prudent about social gatherings, particularly when members of the family might be at a risk because of their age or their underlying condition.
‘Namely, you may have to bite the bullet and sacrifice that social gathering unless you’re pretty certain that the people that you’re dealing with are not infected.’

Report this ad
The presidential advisor discussed the differences between household gatherings and ones where family members travel to meet up with each other.
He said he was not worried about infecting his wife because they are not gathering with others outside the home, but his children will not be joining them for Thanksgiving.
He said. ‘I would love to have it with my children, but my children are in three separate states throughout the country, and in order for them to get here, they would all have to go to an airport, get on a plane, travel with public transportation.‘
His warnings come after the Centers for Disease Control and Prevention (CDC) made similar warnings about the upcoming holiday on Wednesday.
Robert F Kennedy Jr Slams Fauci, Vows To Bring Him To Justice
Dr. Anthony Fauci is a “criminal” according to Robert F. Kennedy Jr., who has vowed to bring the immunologist and head of the National Institute of Allergy and Infectious Diseases (NIAID) to justice.
Fauci became a household name in recent times, but he has been a key figure in the U.S. public health sphere for decades — and according to Kennedy Jr., his criminality has had disastrous consequences.
Fauci, 79, has been the head of NIAID for a long time, becoming director in 1984. As the director, he is responsible for a large portfolio of research on established and emerging diseases. As per his NIAID bio, Fauci’s purview includes HIV/AIDS, respiratory infections, tuberculosis, malaria, Ebola, Zika and now COVID-19. He also oversees research on autoimmune disorders.
According to Robert F. Kennedy Jr., who serves as the chair of Children’s Health Defense Fund, Fauci has “committed one of the most consequential criminal conspiracies in history.”

Report this ad
According to Kennedy Jr., Fauci “distributes $6b annually in research grants” and he personally ensures that “studies of autism’s environmental causes never get funded.”
When in 2008 NIH’s Autism Coordinating Committee allocated $16 million to study the potential links between autism and vaccines, Kennedy Jr. says Fauci and Tom Insel, the director of the National Institute of Mental Health, killed the studies.
“They have committed one of the most consequential criminal conspiracies in history,” said Kennedy Jr. “Children’s Health Defense will bring these criminals to justice.“

» Dr. Anthony Fauci: Americans Must ‘Do What You’re Told’ Despite ‘Independent Spirit’
» Anthony Fauci Turns Tyrant: COVID-19 Spreads Because Americans Have Too Much Freedom
» POS Fauci Says Millions of Americans Refusing to Get Experimental Covid Vaccine is “Unacceptable”
» President Biden Demands Mercola Be Banned From Social Media
» Fauci: Masks Need to Stay On Until At Least June and Only if Americans Take the Vaccine