This is only the second time I have replayed a ‘good people’ post.  Admittedly, I am short on the resources of time & energy tonight, but there is good reason for this repost from June 2018.  First, these two guys will warm your heart, and this remains today one of my most popular good people posts.  And second,  I only today found that Rob Scheer wrote a book … it was actually published in late 2018, but only came to my attention today.  The book is titled A Forever Family: Fostering Change One Child at a Time and is “an inspirational memoir by the founder of Comfort Cases about his turbulent childhood in the foster care system and the countless obstacles and discrimination he endured in adopting his four children.”

I hope you don’t mind too much that I am reposting … I promise all new good people next week!

This week, good people have been dropping into my lap!  No, not literally … that is actually Princess Nala you see on my lap.  But several times in the past week I have come across stories about good people.  This morning, I would like to introduce you to two of those good people:  Rob Scheer, and his husband Reece.

Rob Scheer was raised in an abusive household where his parents, both alcoholics and drug addicts, thought it was great fun to hold guns to their children’s heads from time to time.  When he was ten-years-old, his parents died and Rob was placed in foster care, carrying all his worldly belongings in a trash bag.  Rob was determined to rise above his beginnings, to define his own path in life.
At age 18, as typically happens with foster kids, Rob found himself homeless.  Not knowing what else to do, he joined the military.  When he got out, he took an office job and over the next decade and a half, successfully climbed the corporate ladder.  When he and Reece were married, they both knew they wanted to be dads … and they planned to adopt a child … one child … through the foster care system.  Well, you all know that saying, “the best laid plans of mice and men often go awry”?  The first child available was actually two children, a sister and brother, Amaya and Makai.  And then before long, there were two more, Tristan and Greyson!  Even though Rob and Reece had planned to adopt only one child, they adopted all four, all but Amaya being under the age of two! 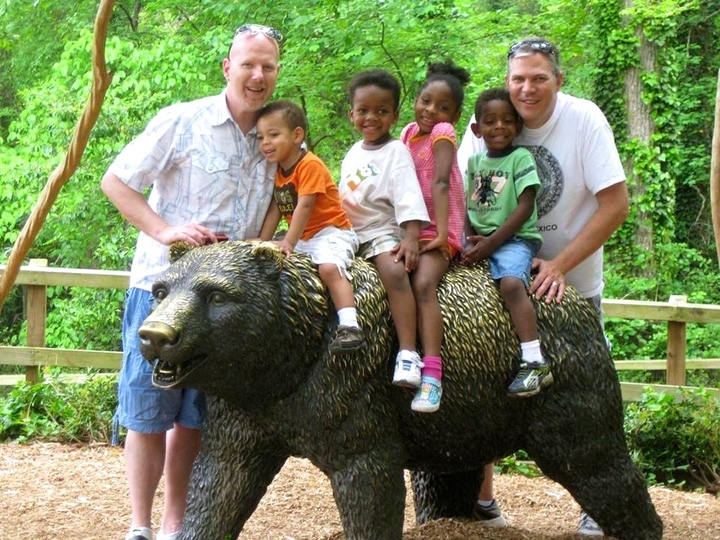 One of the children, Makai, was born with Fetal Alcohol Syndrome (FAS) and had special needs.  Reece came across an article that said children with FAS seemed to recover when they were raised around animals and in fresh air.  So what did Rob & Reece do?  Why, they bought a farm, of course!  But not just a farm … they also bought goats and chickens and ducks!  They are an amazing family, each child knowing beyond a doubt that he or she is loved and wanted. 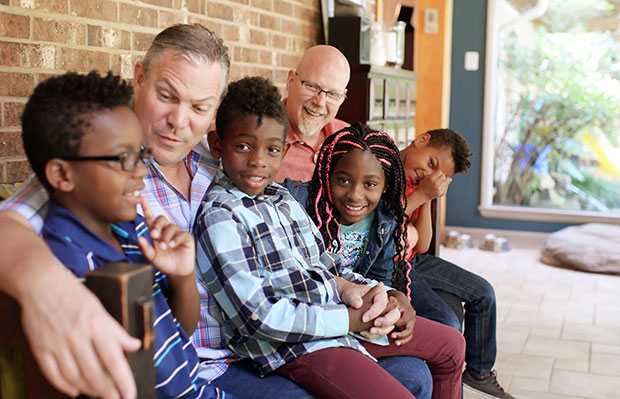 And while adopting those four gorgeous children, buying a farm, and loving them so much would be enough to qualify them as ‘good people’ in my book, the story doesn’t end there!  Rob was disturbed when, some 30 years after his own horrific experience of his first foster home and that garbage bag with his belongings, all four of his kids came to them in the exact same way … with their meager belongings in a garbage bag.  This weighed heavily on Rob’s mind, and he decided to take the bull by the horns, to do something to change it, and he started a non-profit called Comfort Cases.
“I couldn’t believe it. The trash bag that I had carried so many years prior to that had found its way back into my life. It’s just not acceptable that any child should carry their belongings in something that we all throw our trash in and dispose of.”
At this point, I want to let Rob tell you a bit about himself, the family, and Comfort Cases …

Part of the mission statement of Comfort Cases reads …
“At Comfort Cases we believe that every child deserves to feel a sense of dignity.  Every child deserves to pack their belongings in a special bag that they can call their own.  It is our mission as a charity to provide a proper bag, filled with comfort and essential items, to these brave youth in foster care on their journey to find their forever home.”

Recently Rob & Reece were featured on The Ellen DeGeneres Show.  I cannot embed the clip, but here is a link and I will tell you … you won’t regret seeing this and there won’t likely be a dry eye in the house!   At the end  of the segment, Ellen surprised the men with a check for $10,000 and $40,000 worth of luggage cases donated by Samsonite.
I hope you enjoyed meeting Rob and Reece through these two video clips … I think they are awesome men!  Meanwhile, two-thumbs up to Rob and Reece Scheer, two men who have done and continue to do good things for foster children!