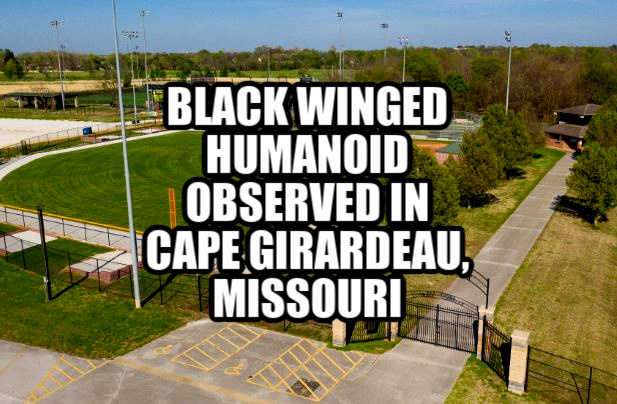 A Cape Girardeau, Missouri woman reported seeing a black winged humanoid that she described as being similar to the 'Jeepers Creepers' film creature.
The Singular Fortean Society recently received a message from a woman who wished to report her sighting of a “black, humanoid figure with very large wings and legs” in Cape Girardeau, Missouri.
According to the woman, the sighting took place while heading east on Bertling Street, near the Southeast Missouri State Softball Field, between 8 and 9 pm on October 8th.
Tobias Wayland was able to interview the witness over the phone.
"Me, my two girls, and my fiancé went to a little street area where the houses have Halloween decorations at nighttime," she told the investigator. "We went down one way and then came back the other way to look at both sides of the street. We did that, and we were headed back home. We came up over a hill and when we got down almost to the stop sign, that’s when I saw it. It was like a human figure, but with big wings—the feet and toes were pointed to the ground—it had scrawny legs, but muscled at the calf. The feet were long but pointy. It was maybe six feet tall. The wings weren’t open, they were still closed."
The creature's wings, which she said looked like they were made of skin, "were really pointy and they were past its head. [The creature] just looked like somebody getting ready to dive off of something, like they have their hands out. The wings were over top of it, and they were pulled in, like wrapped around it. The wings weren’t as long as the body. They came out over the head, but were shorter than the legs."
Its head, she added, was "was really little and round—kind of pointed but round.”
The creature, which she estimated to have been around 100 feet from the car, looked like it had just "leaped from the trees” to the right of the road.
"About 100 feet from the stop sign to the right is a grove of tall trees," the woman said. "About two to three acres of big, tall trees. That’s where I saw it. [The creature] looked like it had leaped or dove. It was higher than the streetlights, but not real high—midway over the road, but in the sky."
Although the being was black, she was still able to see it because "the light from the softball field lit it some." The dark figure stood out against the sky, as it was “blacker than the night itself.”
She said it didn’t look like the creature had any fur or feathers.
"It was bigger than a bird, it didn’t look like a bird," she explained. "When I saw it, it was kind of like [the monster from] Jeepers Creepers."
The woman asked her fiancé if he’d seen it, too, and he thought he had caught “maybe a little bit of it.”
She estimated that the sighting lasted only six to eight seconds.
After her sighting, the woman looked online to see if anyone else had seen something similar, and found an article published by the Singular Fortean Society about a man who said that he and his son encountered a strange flying creature while hunting ducks near West Alton, Missouri in 2016. That sighting was originally reported to Lon Strickler of Phantoms & Monsters.
West Alton is approximately 125 miles north of this sighting area in Cape Girardeau.
"I was going to get my phone out [to record it], but then I thought ‘What if it sees me and tries to come after me?’ I’d never seen or read about anything like that until I looked it up to see if anybody else had seen any other bat-looking humans," she said. "It was a shock to see something like that. It is a little scary to go out at night and know something like that’s out there."
NOTE: The witness also contacted me after reporting the incident to Tobias Wayland. Lon