A former NASA consultant claims he saw staff from the US space agency editing “UFOs” out of images of the Moon before they were released to the public.
by Jon Austin
Dr Ken Johnston Sr was a consultant employed by Brown & Root in the Lunar Receiving Laboratory, of the NASA Johnson Center in 1971.

He was involved in storing, curating and cataloguing Apollo images and moon rocks.
One important aspect of his job was to package and ship lunar samples to science labs.
It was during this time that he alleges to have seen NASA photo technicians painting out details of anomalies and UFOs in lunar photos taken during Apollo missions. 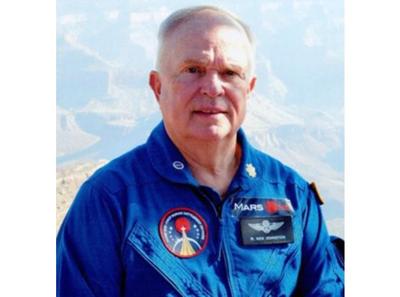 He also claims to have been aware of other anomalies between original photos and films he observed firsthand, and what was catalogued by NASA or made available to the public.
Mr Johnston made the extraordinary claims as he donated photographs and research materials to Roswell’s International UFO Museum and Research Center.
The museum has one of the biggest collection of UFO and alien-related material in the world – and was set up to commemorate the July 1947 alleged flying saucer crash that happened in the desert outside the New Mexico town.
However, it refuses to comment on individual allegations due to the high volume.
Mr Johnstone is not the first former NASA consultant to make such outlandish claims.
In December Express.co.uk reported how Donna Hare, who claims to have worked for computer and engineering contractor Philco Ford during the early 1970s in NASA’s photo labs on and off the site of the group’s HQ, said evidence of UFOs in images was destroyed.
She said a security guard told her he was forced to burn UFO pictures by mystery armed men, who struck him with the butt of a gun for looking at them.
She also claims to have seen a UFO in a NASA image being airbrushed out by technicians.
Ms Hare also claims to have had a high level of security clearance and was able to access parts of the building known as ‘Building Eight’, which “gave her contact with a series of high ranking officials who leaked her information in secret over lunch”.
She claims in a video testimony to have learnt NASA officials who wanted to speak out about the existence of UFOs were threatened with the loss of their pensions and forced to sign gagging orders.

» WHISTLEBLOWER FROM NASA HAS EVIDENCE OF MOON PHOTOS BEING MANIPULATED TO HIDE UFOS!
» UFO News ~ UFOs on NASA images in the near-solar space plus MORE
» NASA just released Cassini images showing possible UFOs near Saturn's moon Titan
» YouTuber Alleges to Have Finally ‘Nailed the TRUTH’ About Whether NASA Went to the Moon
» USB stick found with astonishing 1900s images of planets and UFOs in space