» Close Encounters of the Fifth Kind: Contact Has Begun

Yesterday at 2:50 pm by Consciousness Of Economic

Ever wanted to ask NASA if America really went to the Moon ? Image Credit: NASA / James B. Irwin
The space agency is producing a special Halloween video in which it will debunk user-submitted conspiracies.
With so many conspiracy theories floating around these days, it can be difficult to keep up - which is why NASA has decided to dedicate its Halloween video this year to debunking as many common conspiracies as possible, especially those concerning the space agency itself.

"Think we didn't land on the Moon? What about the Earth being flat?" NASA wrote. "We're diving into conspiracies and hoaxes for a special #NASAHalloween episode of #AskNASA."

"What secret plans do you think we've been cooking up over the years?"

Unsurprisingly, the Tweet has since generated a great deal of interest.

"I just want to know why you haven't been back to the moon for so long ?" wrote @richietoamills. "That's the red flag for me. Surely its gotten easier over 40 years??"

"The earth is flat," @theVinceBonner argued. "The attitude indicator in planes have been mechanical for years. There would be a constant drift if earth was a sphere."

Some of the comments also delved into the subject of UFOs, Roswell and Area 51.

"1947 national security act was implemented solely for the Roswell crash," wrote @bigbird3420. "We learned integrated circuits from reverse engineering and Bob Lazar spilled the beans in 89, ununpentium (115) is now on my periodic table. What tech do you have to bring us out of fossil fuels?"

One commenter even cited Terry Pratchett's Discworld in response to the 'flat Earth' concept.

"You are wrong, it's a disc carried by 4 elephants, themselves carried by a giant turtle named Atuin floating in space," wrote @rtrrtrtrtr1. "But nice try though."

A video compiling NASA's responses to the questions asked will go out in time for Halloween.

Think we didn't land on the Moon? What about the Earth being flat? We’re diving into conspiracies & hoaxes for a special #NASAHalloween

episode of #AskNASA. What secret plans do you think we’ve been cooking up over the years? Drop them below. Video reply = extra points 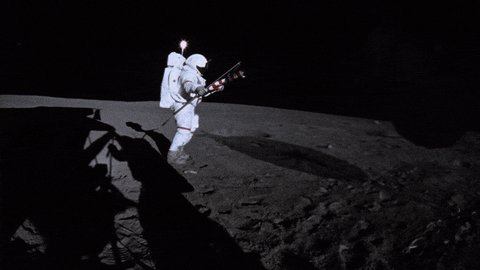