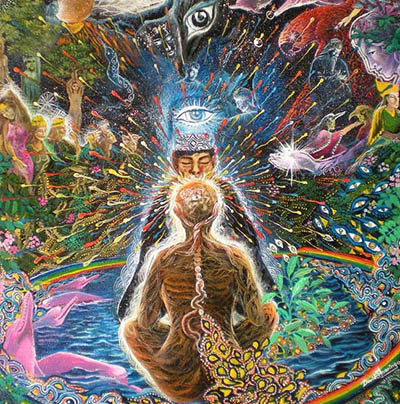 The effects of ayahuasca on mental health and the quality of life of first-time users have officially been studied. And the results are truly groundbreaking.
From Rituals to Recreational Use
Ayahuasca is a South American entheogenic brew with powerful hallucinogenic properties. Both shamans and users claim that it opens your mind and heals past trauma. Western users associate the blend most often with DMT, which is a similar chemical preparation and present in ayahuasca. Indigenous peoples in Amazonian tribes have used ayahuasca for centuries in rituals. Paying customers from Western countries have begun “spiritual tourism”. Seeking to consume it for the brew’s therapeutic benefits.
According to Healthline, “the powerful psychedelic brew affects the central nervous system, leading to an altered state of consciousness that can include hallucinations, out-of-body experiences, and euphoria.” Because of its strong psychedelic effects, many users have reported life-changing experiences. Furthermore, users have often expressed underlining feelings which they would normally suppress.
Ayahuasca consumers often testify to its healing properties. As a result, scientists have shown increasing interest in conducting research on its actual healing properties for humans’ mental health. For this very reason, researchers have studied the long-term effect of the brew’s consumption.
The Study
A longitudinal and cross-sectional study combination has recently revealed that ayahuasca has improved people’s long-term mental health. Consequently, researchers designed two sub-studies for this investigation.
In the first sub-study, researchers administered a psychiatric interview and a series of questions to 40 people. They carried this out before the subjects’ first ayahuasca use. Later on, they conducted two follow-ups after one month, and then after six months.
In the second sub-study, researchers gave the same interview and series of questions to 23 long-term ayahuasca users. Subsequently, their they compared users’ scores with those of the first-time users, referred to as the “Ayahuasca-naïve” group.
In the first assessment, 45% of the users—which corresponds to nearly half of the naïve group—were found to meet the diagnostic criteria for a psychiatric disorder. After the ayahuasca use, more than 80% of those subjects showed clinical improvements that persisted for six months.
Additionally, the questionnaires showed a significant decrease in depression and psychopathology. Moreover, in the second sub-study, long-term users showed lower depression scores, and higher scores for self-transcendence and quality of life, as compared to their peers in the first sub-study.
Remarkable Mental Health Improvements
In an article published by PsyPost, the authors explained that “despite not finding statistically significant differences between assessments among the subgroup of naïve users with psychiatric disorders, remarkable improvements were observed for several scales measuring psychopathology and quality of life.”
“This lends support to previous research that found that ayahuasca users gained therapeutic benefits or experienced an enhanced ability to solve personal problems,” the authors said.
Ayahuasca has yet to be studied for future research before being completely approved by the FDA as a treatment for people affected by mental health disorders and other psychopathologies.