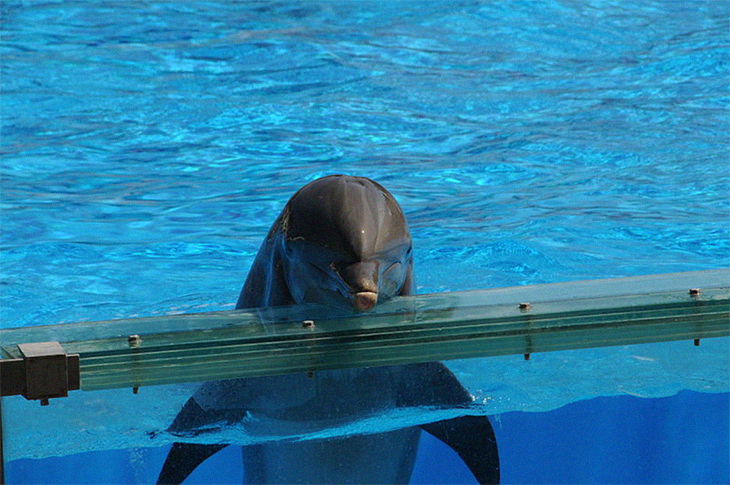 Whale and dolphin lovers unite! Animal rights advocates have major reason to celebrate since Canada finally passed the “Free Willy Bill,” as the media called it.
The Ending the Captivity of Whales and Dolphins Act was actually introduced in 2015 but only passed in June of 2019. Yet despite the fact that it’s been more than a year that has gone by since, it doesn’t mean the celebration needs to stop. This is a huge win for both animals and humanity alike. The act is meant to protect whales, dolphins and porpoises from being bred and held in captivity for entertainment purposes.
The act also ensures that cetaceans, or aquatic mammals, will not be forced to remain in aquatic entertainment parks where they reportedly suffer from trauma in confinement, as iterated by a number of animal rights groups.
Aside from that, this bill also prevents these marine animals from being forced into captive breeding, as well as protecting them from live captures, being used in the import-export market, as well as banning the keeping of any reproductive matter.
Advertisement
Unfortunately, there are still some exceptions to the bill. Marine mammals that are already in custody can be kept in captivity, including those that have been rescued or are in the process of rehabilitation due to the injuries, as well as those that are the subject of limited scientific research. While the parks, zoos and aquariums are allowed to keep the animals that they already have in captivity, they cannot replace them.
The bill was originally shelved back in 2010 by former Sen. Wilfred Moore of Nova Scotia. But when it was finally passed into law, he made a statement saying “We have a moral obligation to phase out the capture and retention of animals for profit and entertainment. Canadians are calling upon us to do better – and we have listened.”
The historic event had marine scientists and animal rights defenders coming out to celebrate the news, tweeting their joy with hashtags like #Fre

#Breaking: When we work together, good things happen. This is a combined effort from @ElizabethMay, Senators Moore and Sinclaire, key Liberal and NDP MPs, NGOs, marine scientists and everyday people across Canada. #FreeWilly 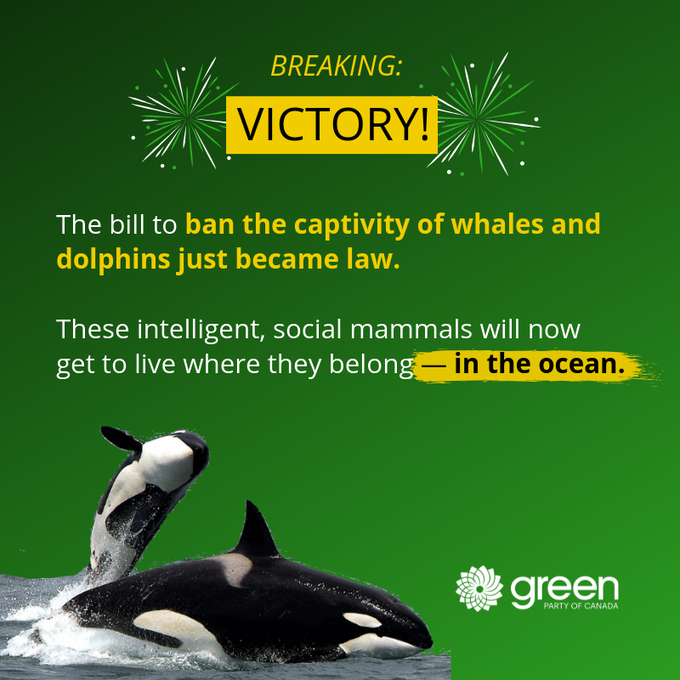 
For years, animal experts and animal humane groups have fought for this type of change in animal welfare because they share that dolphins and whales suffer horrible psychological and physical suffering when forced into captivity. Some of these health issues include abnormal behavior, chronic health problems, extreme boredom and high infant mortality, especially when they are in prolonged isolation.
Canada isn’t the only country that bans cetacean captivity either. They are now on the list, alongside other countries like Costa Rica, Switzerland and certain US states like New York and California that have strict laws on dolphin, whale and orca captivity.
And when Canada finally made it on the list, Canada’s Executive Director of the Humane Society International / Canada, Rebecca Adlworth, shared in a statement, “The passage of Bill S-203 is a watershed moment in the protection of marine animals and a victory for all Canadians. Whales and dolphins don’t belong in tanks, and the inherent suffering these highly social and intelligent animals endure in intensive confinement can no longer be tolerated.”
When the law was passed, there were two particular facilities that were hugely impacted by it, namely the Vancouver Aquarium and Marineland in Niagara Falls.
As shared by CBC, back when the law was passed, Marineland owned at least 61 of these types of animals. They also cited that they were “55 beluga whales, five bottlenose dolphins and one orca, or “killer whale.””
Thankfully, Marineland released a statement explaining that they would comply with the new legislation, eventually choosing to evolve from their former ways and legislation that had been put in place back in the 60s when the park was first founded.
Meanwhile, the Vancouver Aquarium only had one dolphin left at the time of the bill’s passing. Then also released a statement from Vancouver Park Board Chair, Stuart Mackinnon, saying “The public told us they believed the continuing importation and display of these intelligent and sociable mammals was unethical and incompatible with evolving public opinion and we amended our bylaws accordingly.”

Report this ad
Another supposed win occurred back in 2016 when the U.S. based SeaWorld Parks & Entertainment made an announcement that they would end breeding killer whales in captivity while guaranteeing to shift gears into marine mammal rescue operations. Their parks are located in Texas, California and Florida.
Notably, a National Geographic report claimed that there were around 60 orcas that were in captivity being held in aquariums and parks worldwide at the time that the bill was passed. And astonishingly, one third of that number were all within the United States. And from that third, all of the orcas except for one, were being held in San Antonio and Orlando’s SeaWorld Parks.
Although the company claimed that they were going to end their dolphin and orca shows, their main attractions involve the dolphins, and sadly, have not been stopped since.   In fact, Hendrik Nollens, who works as SeaWorld’s Vice President of Animal Health and Welfare, reportedly defended this, saying about the dolphins, “They’re treated like royalty.” And when asked about whether these mammals suffered discomfort, he claimed “they wouldn’t come right back and do it again” if they did.

“They are faster than us, they are stronger than us. They are in charge. They choose. They decide whether to do the interaction or not,” he added.

But not everyone agrees of course. Canadian Hal Whitehead, who happens to be a marine scientist, advocated the new law explaining, “The living conditions for captive marine mammals cannot compare to their natural ocean environments in size, nor in quality.”
And until this bill is passed all throughout the globe, there will surely be people fighting for the rights of these beautiful and incredibly intelligent creatures, and rightly so.
Read More: https://www.trueactivist.com/canada-has-banned-dolphin-and-whale-captivity-officially-t1/