OUT OF MIND » VOICES CARRY » AMAZING PEOPLE, PLACES & THINGS » 9-Year Old Walks to School To Do His Work Because His Family Can’t Afford Internet 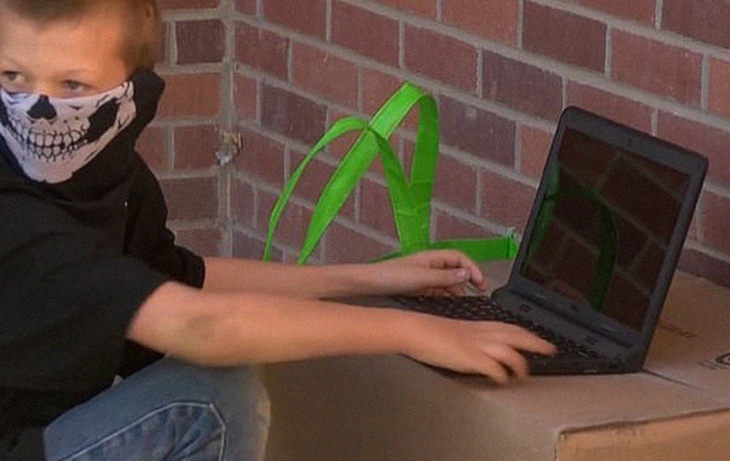 A 9-year old boy from Roswell, New Mexico has been spending his days outside of his school in order to do his school work. This is because his family can’t afford to pay for Internet at home. Like many other families affected by the coronavirus pandemic, this boy’s family sadly lost their ability to pay for their WiFi connection.
But the boy, Jonathan Endecott, who happens to be turning 10 next month, isn’t letting that stop him from learning! A fourth grader in the Roswell Independent School District, Jonathan has been forced to stay home because of the pandemic like all the other kids in his area, as well as many others throughout America and really, the world.
Just like many other parents around the globe, Jonathan’s mom Angel, who works in home health, sadly lost both of her jobs due to the Covid-19 pandemic. And even though she eventually got one of her jobs back, she wasn’t earning enough to reinstate their internet connection.
Apparently Jonathan really enjoys school, with Science class being a personal favorite. According to Angel, he’s also quite independent, and since his house is situated right across the school field, she suggested that the boy walk to the school in order to get access to their internet so that he could still do his classes online.
In fact, his mom explains that he was quite happy when she suggested that he spend his class time on the school campus, even if it meant sitting outside the school doors rather than inside an actual classroom. Angel also shared, “He was like, ‘Yeah, I need to be back on the school property, and I could be like a normal kid again.’”   “Him just being outside of the building gives him that, ‘Hey, I’m at school’ feeling even though he’s not around other classmates or teachers,” she added.
And since their home is located directly across the way, Angel and her husband felt that it was safe for Jonathan to not only walk to school like he normally does, but to spend the day there as he does his work. She also explained, “The principal, the secretary and a few teachers, they do come outside to check up on him and see if he needs anything.” 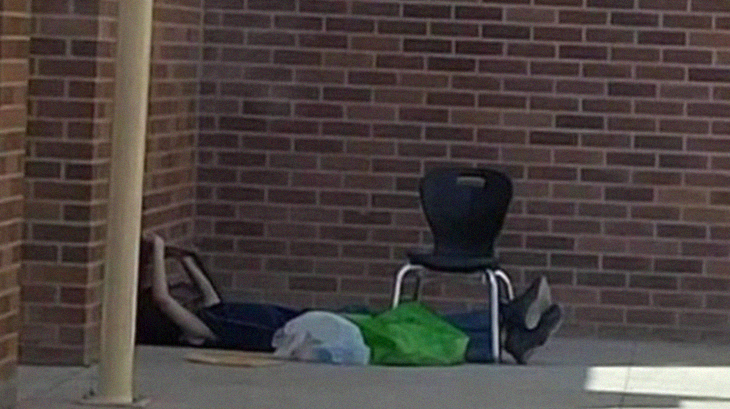 My Positive Outlooks
After one of the teachers saw Jonathan lying down on the concrete ground while on the school grounds holding his laptop, she found the sight of the young boy so heartbreaking that she took a photo and went on to ask permission from his mom to share his photo on Facebook.

That teacher, Sabrina Talbott Harbour, then wrote as the caption, “This young boy has no internet at his home. He has been getting up and walking to school every day to connect to the school WiFi from outside the school. He sits there every day from 8:00 – 2:45.”
The photo garnered so much attention that eventually, a kind-hearted citizen reached out and offered to pay for the family’s internet service in Jonathan’s home for an entire year so that he wouldn’t have to sit outside of the school just to get access.
Then another kind-hearted person that saw his photo, Shelby Dutton, also decided to put up a GoFundMe page in order to help other children suffering the same fate as Jonathan, knowing that he couldn’t be the only one whose family and schooling have been affected by the ongoing pandemic. 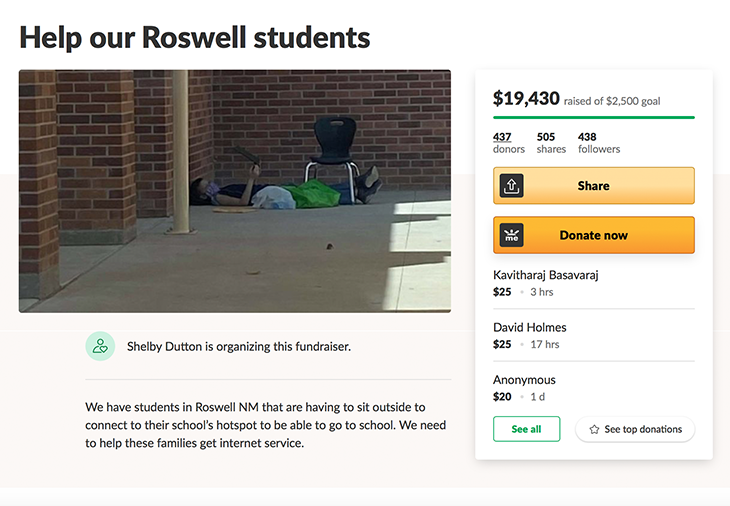 Screenshot from GoFundMe
Initially, the initiative was to raise $2,500 in total, but it has since surpassed their goal immensely, already reaching up to $19,405 so far. Ms. Dutton updated the page by sharing “We have helped over 28 students and still counting! Thank you everyone for your love and support. Our organizations website is up and running! Go to kidsorganization.org to donate!! Our mission is to help as many students we can!!!”
However, Angel shared that Jonathan likes getting up and going to the school, even if he’s not inside the actual building while he’s learning. According to her, it also gives him a bit of a reprieve from his family too, sharing that even if they already have WiFi connection at home, he’d still like to work outside the school. The school district was quick to tell Angel though that if he does decide to remain on the school premises, he’ll need to have a parent with him.
Meanwhile, Angel eventually created her own GoFundMe page to ask for financial help as well, calling it “family in need of help.” She explained on her page that while most people have heard about part of their story, that while she’s not very good at asking for help, she’s decided to do it anyway because they really need it.   She wrote, “We have always lived paycheck to paycheck. With God’s help we have always managed to get just enough to live with what we had to pay for. Then my husband’s diabetes started to impact everyday life. I got 2 jobs to cover the loss of income. When covid hit. At first it didn’t effect my employment. About 2 months ago that changed. I lost my weekly paying job.”

Aside from that, Angel also shared that their toilet got clogged up after her 4-year old decided to flush a cologne bottle down it, which in turn created an entire slew of issues. And sadly the list of problems grew from there. Angel had put $2,500 as her fund raising goal, but the family has since received up to $19,430 so far, all out of the goodness of people’s hearts.
Aside from both fundraisers exceeding their limits and being a major blessing to the Endecott family and many others like them, it’s proof that when a community comes together for the greater good, amazing things can happen!
Read More: https://www.trueactivist.com/9-year-old-walks-to-school-to-do-his-work-because-his-family-cant-afford-internet-t1/

OUT OF MIND » VOICES CARRY » AMAZING PEOPLE, PLACES & THINGS » 9-Year Old Walks to School To Do His Work Because His Family Can’t Afford Internet

» 13-Year-Old Traded His Xbox And Did Yard Work So He Could Afford A Car For His Mom
» Heroic 11-Year-Old Girl Suspended From School for Refusing To Wear a Mask
» 7-Year-Old Boy Takes Sole Care of His Paralyzed Father After His Mother Walks Out
» POOFness for JUNE 1: WORK OF AN INTERNET SCAMMER
» POOFness for SEPT 24: LOGICAL ... why work when you can be an internet panhandler