Online profiles of the dossier’s publisher misrepresent key aspects of his background, The Intercept has learned.

November 11 2020, 8:51 a.m.
In the weeks leading up to the presidential election, a document detailing Hunter Biden’s purported connections to the Chinese Communist Party circulated in the far-right online ecosystem.
The 64-page document, which is styled as a confidential “intelligence report,” claims to reveal new links between the Chinese government and Hunter Biden, the son of then-Democratic presidential candidate Joe Biden. It also alleges Chinese influence operations aimed at “cultivating” Hunter Biden and, without giving concrete evidence, accuses the elder Biden of altering his stance on China as a result of his son’s work there. “BIDEN shifted his view from hawkish to dovish after HUNTER began receiving entrée into Chinese elite political and financial institutions,” the dossier alleges.

How Hunter Biden Stumped the Media

Published online in September, the dossier has been heralded as evidence of the Biden family’s corruption by Steve Bannon, Newt Gingrich, and Q, the mysterious figure behind the conspiracy theory QAnon. The China dossier also served as a kind of prequel to a series of stories published in late October by the New York Post. Together, the China dossier and the Post stories, which were based on the contents of a laptop associated with Hunter Biden, appeared calculated to sow doubt about the elder Biden’s fitness to govern by drawing unsubstantiated connections between the son’s poor judgment and the father’s politics.


In late October, disinformation researcher Elise Thomas discovered that both the firm whose logo appears on the China dossier, Typhoon Investigations, and an associated analyst named Martin Aspen were fake.
Martin Aspen is not the only invention in this strange saga, however, The Intercept has learned. Online bios describing the blogger who first published the dossier misrepresent significant aspects of his background.
The blogger, Albert Marko, has variously presented himself as a pollster, an international relations buff, and a U.S. congressional expert. Public records show that he is a Florida resident who has launched a variety of mostly inactive businesses, including in software, painting, and cosmetics. Steve Bannon, former political strategist for President Donald Trump, center, departs from federal court in New York on Aug. 20, 2020.
Photo: Mark Kauzlarich/Bloomberg via Getty Images
The provenance of the Typhoon Investigations report matters because of concerns that it was part of a coordinated right-wing campaign to tip the election to Donald Trump. The Post reported that Bannon, a former Trump adviser who is out on bail after being indicted for wire fraud and money laundering, told newspaper staff in September about the existence of the Hunter Biden-associated laptop; the paper ultimately published emails and other materials from a copy of the laptop’s hard drive provided by Trump lawyer Rudy Giuliani. GTV Media Group, the company Bannon recently started with Chinese billionaire Guo Wengui, has also promoted salacious stories about Hunter Biden.
Bannon, who once said that the way to counteract the media is to “flood the zone with shit,” told listeners to his podcast “War Room: Pandemic” last month that he saw a copy of the Hunter Biden-China report ahead of its publication.
In early September, Marko posted the Typhoon Investigations report, which is titled “Project Time,” on the blog Intelligence Quarterly, which he told The Intercept he runs with his friends. He made news when Thomas, the disinformation researcher, connected him with the publication of the dossier.

The fake analyst’s Twitter photo turned out to have been computer-generated.

On the first page of the report, the author is listed as “M A.” Thomas connected these initials with fake analyst Martin Aspen, whose online persona promoted the report ahead of its publication. “We are currently working on a big and important investigation,” Aspen’s Twitter account, @TyphoonInvesti1, tweeted on August 13. “Watch this space!” Marko published the report online a few weeks later.
The fake analyst’s Twitter photo turned out to have been computer-generated. Other parts of his identity, including a LinkedIn profile, also appear to have been fabricated. “That kind of deceptive behavior about the origins of a report which makes such significant allegations about the family of a presidential candidate, weeks before the presidential election, is completely unacceptable,” Thomas told The Intercept. 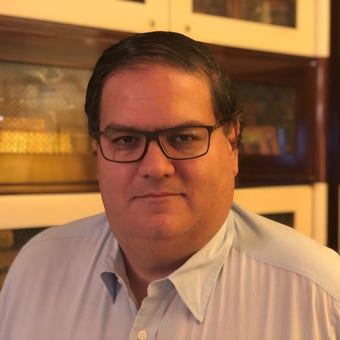 Mark Simon, a former senior executive at Next Media, poses for pictures at the Next Media headquarters in Taipei on Oct. 30, 2014.
Photo: Pichi Chuang/Reuters
The identities of several others involved in producing the Typhoon Investigations dossier have since become clear. One key figure was former U.S. naval intelligence officer Mark Simon, an American executive at the Hong Kong tabloid Apple Daily, which is owned by media tycoon Jimmy Lai. Simon paid out $10,000 of Lai’s money for research related to the dossier, according to a series of tweets from Lai, who maintained that he was unaware of the project.
One person who helped produce the report was Christopher Balding, an American researcher who until recently was based in Vietnam. Marko told The Intercept that he received the report from Balding but that Balding was not the principal author. Marko published it because “it was relevant to the election from previously reported Hunter Biden antics,” he said, adding that he “never contributed to it, never edited it nor even read more than a glance before posting it.” Balding posted a slightly updated version of the Typhoon Investigations report on his own blog, Balding’s World, on October 22. He appeared on Bannon’s podcast two days later.
Balding’s ties to Bannon are unclear, but it was the second time he had appeared on the show. The first was in September, to discuss a purported Chinese government data leak. Balding declined to comment. Marko told The Intercept that he “never met Bannon, nor communicated with him nor would ever want to for any reason.”
Marko has tweeted about Hunter Biden for years, but it’s not clear how he came to be the first to publish a report that could have influenced the 2020 presidential election. Like Martin Aspen, Albert Marko has a bio that is partly pulled from thin air.

Like Martin Aspen, Albert Marko has a bio that is partly pulled from thin air.

Several identical online profiles describe him as holding “a bachelor’s degree in International Relations and Diplomacy from Stockholm University” as well as a bachelor’s degree from University of Detroit Mercy. When reached by phone, the Department of Economic History and International Relations at Stockholm University said it had no record of anyone by the last name Marko graduating. Marko told The Intercept that he had taken free courses offered by the university after “ending an attempt to play pro soccer in Europe due to injury.” He said that he was unsure why the school was listed in his online bios, which he said an assistant submitted on his behalf, but that he had attended University of Detroit Mercy. Gary J. Erwin, an associate vice president for University of Detroit Mercy, said the school had no record of Marko earning a degree and that he could not comment on whether Marko had taken any classes there because of federal privacy regulations. Marko did not respond to further questions about his education. One of his online bios, on the networking site Topio Networks, was taken down after The Intercept began making inquiries.
Marko’s bio for the consultancy Malmgren Strategic Institute, where he sits on the advisory board, says that during the Kosovo War, Marko was “a liaison to the Albanian side.” The Intercept was unable to verify this claim or ascertain whom he might have represented. In response to a request for more information, Marko wrote, “I’m Albanian by heritage and speak two dialects. Hence the history there and I won’t speak much about it.” The Malmgren Strategic Institute did not respond to a request to comment.
Marko has made frequent references on Twitter to being of Albanian descent, many in the form of semi-joking threats. In April 2018, he complained about a guy behind him in traffic who was blasting the horn. “Part of me was like, ‘well, he’s probably in a rush and late for an important event, we’ve all been there…’ but the Albanian part of me is thinking ‘he does it one more time, I’m pumping 500 AK rounds into his car,’” Marko wrote. Following the publication of an NBC News article detailing concerns about the Typhoon Investigations report, he tweeted about journalists Brandy Zadrozny and Ben Collins: “I’m Albanian… they should remember that.” He also called Zadrozny “that bitch.”
Marko is routinely quoted as an expert in the Post, where he is sometimes described as a “former pollster.” Marko told The Intercept that he “conducted private polling for clients” that were “trying to understand U.S. demographics.” The Intercept could not verify this claim.
One claim that did check out is Marko’s involvement with Bluwave Software, a small company in Florida and North Carolina that created an app for long-term care professionals, according to its website. The company’s Facebook and Twitter accounts have not been updated since 2015. He also registered a company called Alti’s Painting at the address of relatives in 2013, and a business called Ace Cosmetics at his home in 2015. He said that these were “just companies I invested in with friends to help them get started.”
Both Balding and Marko have sizable followings on Twitter. Though generally hawkish on China, they have befriended people across the political spectrum and built reputations as experts on international affairs. Marko has interacted with Balding on Twitter for close to a year and replied to dozens of his tweets. The two men also recently filmed a pair of video discussions for the Texas-based consultancy Complete Intelligence.
A number of questions about the report’s origins remain. One is how and why Q, the figure behind the conspiracy theory QAnon, was apparently tipped off to its publication. On October 21, Q posted, “BOOMS EN_ROUTE TOMORROW.” “BOOMS” is a term that Q uses to refer to important events or news; when Balding published the report the following day, Q posted that link as a “Q drop,” a cryptic clue for followers, on the anonymous forum 8kun.
Other questions center on the involvement of Mark Simon, the Hong Kong tabloid executive. Simon’s boss at Apple Daily, Lai, is unabashedly pro-Trump and last year met with Vice President Mike Pence and Secretary of State Mike Pompeo. Since September, when Marko posted the Typhoon Investigations document, Apple Daily has published more than 40 articles mentioning Hunter Biden, many of them echoing claims from the dossier, according to the Daily Beast.
Simon resigned from his position at Apple Daily on October 30.