New results from the CMS Collaboration at CERN’s Large Hadron Collider demonstrate for the first time that top quarks are produced in nucleus-nucleus collisions. The results open the path to study in a new and unique way the extreme state of matter that is thought to have existed shortly after the Big Bang. 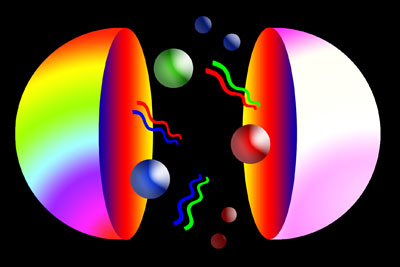 CMS candidate event for a top quark and antitop quark producing an electron, a muon and jets originating from bottom (b) quarks. Image credit: CERN.
With a mass at around 170 times that of the proton, the top quark is the heaviest known elementary particle.
First observed in proton-antiproton collisions at the Tevatron collider 25 years ago, this particle is also a unique and potentially very powerful tool to understand the inner content of nuclear matter.
The creation of a particle-antiparticle pair of such a massive quark requires for a large amount of kinetic energy to be converted into mass through a single, elementary interaction.
Quarks and gluons inside protons and neutrons have a very large spread in energy. Therefore, only a tiny fraction of their collisions pass the threshold energy required for top quark production to occur.
This means that, by selecting events containing top quarks, one is implicitly studying only the most energetic elementary collisions. As a consequence of the Heisenberg principle, these collisions probe the smallest space-time distances.
The top quark’s large mass also results in it decaying faster than any other known quark.
While the average lifetime of a top quark is of the order of a yoctosecond (10-24 s), the lifetime of its sibling, the bottom quark, is of the order of a picosecond (10-12 s).
This matters because a yoctosecond is still hundreds of times shorter than the time required for quantum chromodynamic (QCD) processes to take place.
These QCD processes include hadronization, which ‘dresses’ all other quarks until the final state only contains color-neutral particles, where color is the QCD equivalent of charge.
Additional examples are the formation, expansion and cooling of the quark-gluon plasma, which are each estimated to require a timescale of the order of 10-22 s.
Therefore, unlike the other quarks, the top quark decays before such processes can occur. It can also decay within the quark-gluon plasma itself. This decay produces other quarks that experience intense interaction with the quark-gluon plasma.
From the above reasons, top quarks can provide insights into the highest energy collisions. They also enable physicists to study how the quarks produced from top quark decay experience a ‘quench’ in their energies through interactions with quark-gluon plasma.
“Faster-moving top quarks provide later-time snapshots,” said Dr. Guilherme Milhano, a physicist at CERN.
“By assembling snapshots taken with top quarks at a range of different speeds, we hope that it will eventually be possible to create a movie of the quark-gluon plasma’s evolution.”
“The new CMS result represents the very first step down that road.”
The CMS collaboration saw evidence of top quarks in a large data sample from lead-lead collisions at an energy of 5.02 TeV.
The researchers searched for collisions producing a top quark and a top antiquark.
These quarks decay very quickly into a W boson and a bottom quark, which in turn also decay very rapidly into other particles.
The scientists looked for the particular case in which the final decay products are charged leptons (electrons or their heavier cousins muons) and ‘jets’ of multiple particles originating from bottom quarks.
After isolating and counting these top-antitop collision events, they estimated the probability for lead-lead collisions to produce top-antitop pairs via charged leptons and bottom quarks.
The result has a statistical significance of about four standard deviations, so it doesn’t yet cross the threshold of five standard deviations that is required to claim observation of top-quark production.
But it represents significant evidence of the process — there’s only a 0.003% chance that the result is a statistical fluke.
What’s more, the result is consistent with theoretical predictions, as well as with extrapolations from previous measurements of the probability in proton-proton collisions at the same collision energy.
“Our result demonstrates the capability of the CMS experiment to perform top-quark studies in the complex environment of heavy-nuclei collisions,” said CMS physicist Dr. Georgios Krintiras, a postdoctoral researcher at the University of Kansas.
“And it’s the first stepping stone in using the top quark as a new and powerful probe of the quark-gluon plasma.”
The findings were published online in the journal Physical Review Letters.
_____
A. M. Sirunyan et al. 2020. Evidence for top quark production in nucleus-nucleus collisions. Phys. Rev. Lett, in press