The Barbegal watermill complex, a unique cluster of 16 Roman waterwheels in southern France, was the first known attempt in Europe to set up an industrial-scale complex of machines during the culmination of Roman Civilization in the 2nd century CE. Since the upper parts of the complex were destroyed and no traces of the wooden machinery survived, the mode of operation of these mills has long remained elusive. In new research, a team of scientists from France, Germany and Austria has used carbonate incrustations that formed on the woodwork of the Barbegal mills to reconstruct the structure and function of the complex, revealing a sophisticated hydraulic setup unique in the history of watermills.

From as early as the 1st century BCE, watermills were among the first energy sources not depending upon human or animal muscle power. In Roman civilization, they were crucial for increasing the production of flour, to cut wood and stone, and to process ore.
Barbegal watermills are an outstanding example of this development as one of the first industrial complexes in European history, displaying the greatest known concentration of mechanical power in the ancient world.
The mill complex is a unique arrangement of 16 waterwheels in two parallel rows of eight mills, separated by central buildings and fed by an aqueduct.
Since the upper parts of the complex were destroyed and no traces of the wooden machinery and its water supply system survived, the type of millwheels, and its operation mode have long remained elusive.
“In Barbegal, carbonate deposits have survived as casts of the original timber, which can provide detailed information about individual mill parts, shedding light on the operation of the complex,” said lead author Professor Cees Passchier from the Johannes Gutenberg University Mainz and his colleagues.
The researchers found that the lower Barbegal mills used an elbow-shaped flume to bring water onto overshot millwheels.
“We combined measurements of the water basins with hydraulic calculations and were able to show that the flume to which this elbow-shaped piece belonged very likely supplied the mill wheels in the lower basins of the complex with water,” Professor Passchier said.
“The shape of this flume was unknown from other watermills, either from Roman or more recent times.”
“We were therefore puzzled as to why the flume was designed this way and what it was used for.”
“Our calculations show that the oddly shaped flume is a unique adaptation for the Barbegal mills,” he added. 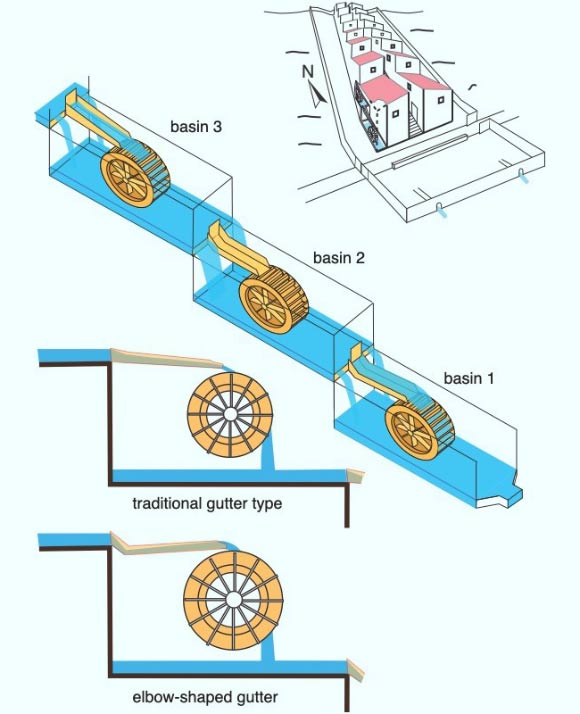 Sketch of the Barbegal mill complex. Image credit: Cees Passchier.
The distribution of the carbonate deposits in the elbow-shaped flume shows that it was inclined slightly backwards against the direction of the current.
This created a maximum flow rate in the first, steep leg of the flume, and at the same time the water jet to the mill wheel obtained the correct angle and speed.
In the complicated mill system, with small water basins, this unique solution was more efficient than a traditional, straight water channel.
“That shows us the ingenuity of the Roman engineers who built the complex,” Professor Passchier said.
“Another discovery was that the wood of the flume was probably cut with a mechanical, water-powered saw, which is possibly the first documented mechanical wood saw — again evidence of industrial activity in ancient times.”
The findings appear in the journal Scientific Reports.
_____
C.W. Passchier et al. 2020. Reconstructing the hydraulics of the world’s first industrial complex, the second century CE Barbegal watermills, France. Sci Rep 10, 17917; doi: 10.1038/s41598-020-74900-5