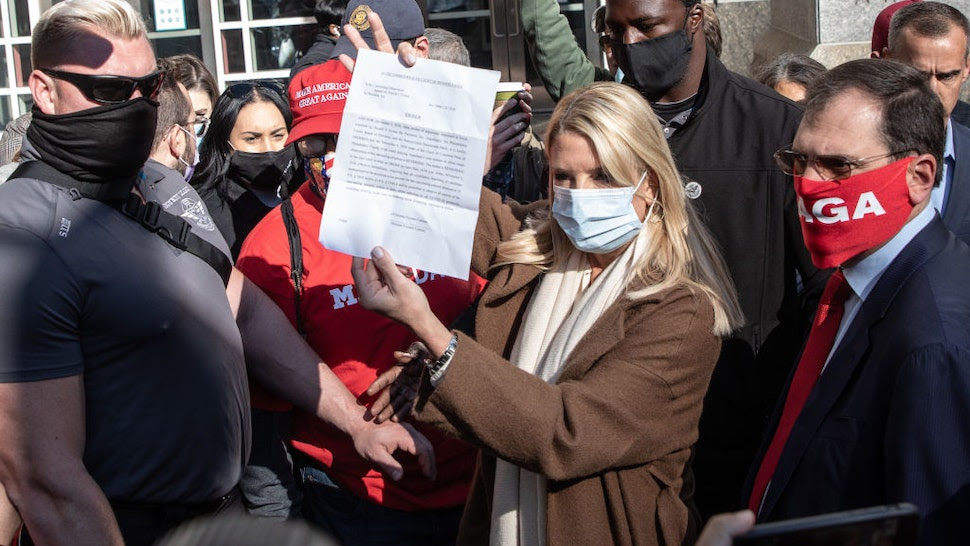 Source:  Amanda Prestigiacomo
Pennsylvania’s Supreme Court on Tuesday overturned an order from Judge Christine Fizzano Cannon that allowed for election observers to be within six-feet of the ballot-counting process.
The state’s Supreme Court said in its decision that election observers only need to be “in the room” to properly observe the ballot-counting process, marking no minimum distance, NBC News reported.
The court found that the Philadelphia Board of Elections worked within the law “in fashioning its regulations governing the positioning of candidate representatives,” according to the Philadelphia Inquirer.
“Critically, we find the board’s regulations … were reasonable,” wrote Justice Debra Todd, The New York Post reported.
The ruling reverses an order from Judge Fizzano Cannon issued on Nov. 5 in agreement with the Trump campaign’s argument that the 25-foot distance from which “candidates, watchers or candidate representatives” needed to be reduced.
The order, now overturned, read as follows:

AND NOW, November 5, 2020, upon review of arguments contained in briefs submitted by Donald J. Trump for President, Inc. (Appellant), the Philadelphia County Board of Elections, and the Pennsylvania Democratic Party, it is hereby ORDERED that the November 4, 2020 order of the Court of Common Pleas of Philadelphia County (trial court) denying Appellant’s oral motion to allow closer observation of the canvassing of ballots is REVERSED. The matter is REMANDED to the trial court to enter an ORDER no later than 10:30 a.m. today, November 5, 2020, effective immediately, requiring that all candidates, watchers, or candidate representatives be permitted to be present for the canvassing process pursuant to 25 P.S. § 2650 and/or 25 P.S. § 3146.8 and be permitted to observe all aspects of the canvassing process within 6 feet, while adhering to all COVID-19 protocols, including, wearing masks and maintaining social distancing. Opinion to follow.

As the time, Trump campaign lawyers said they were turned away by Philadelphia elections officials who refused to comply with the order.
Former Florida Attorney General Pam Bondi posted to Twitter on Nov. 5: “This is a JOKE. They moved the fence up but moved the ballot machines back!!”
“This is offensive for the great people of Pennsylvania who voted and deserve a fair election,” the Republican added.
Bondi said that while officials pushed barricades around the ballot counting to six feet, the ballot machines had been pushed to the back of the room, far beyond the six-feet barrier outlined in the legal ruling.
On the same day, Corey Lewandowski posted a video of he and Bondi speaking with a private lawyer working on behalf of the city about the order.
“Here in Philadelphia with Former Democratic Candidate for Judge Michelle Hangley who is paid for by city tax payer money while refusing to allow us to meaningfully observe a court order,” he captioned the video. “Ask why?”
On Wednesday, President Donald Trump responded to the order reversal: “They didn’t even allow Republican Observers into the building to watch. A terrible insult to our Constitution!”
Twitter added a warning to the tweet: “This claim about election fraud is disputed.” When users click the warning, it directs the reader to a “fact-check” from PolitiFact and The New York Times:

There has been no evidence that Republican election observers were banned from watching ballot counts in Pennsylvania, PolitiFact and The New York Times report. President Trump’s claims contradict comments made by his campaign lawyers in court hearings and lawsuits, according to PolitiFact and The New York Times. There’s also no evidence of widespread voter fraud that would invalidate “hundreds of thousands of votes” in the state according to PolitiFact.

They didn’t even allow Republican Observers into the building to watch. A terrible insult to our Constitution!
This claim about election fraud is disputed

Posts : 170
Join date : 2016-12-15
Location : New York
Unfortunately, the courts are throwing all the petitions filed by the Trump lawyers. And December is around the corner and soon, the corrupted politician will be declared president of this great nation. Sad. Very sad indeed.